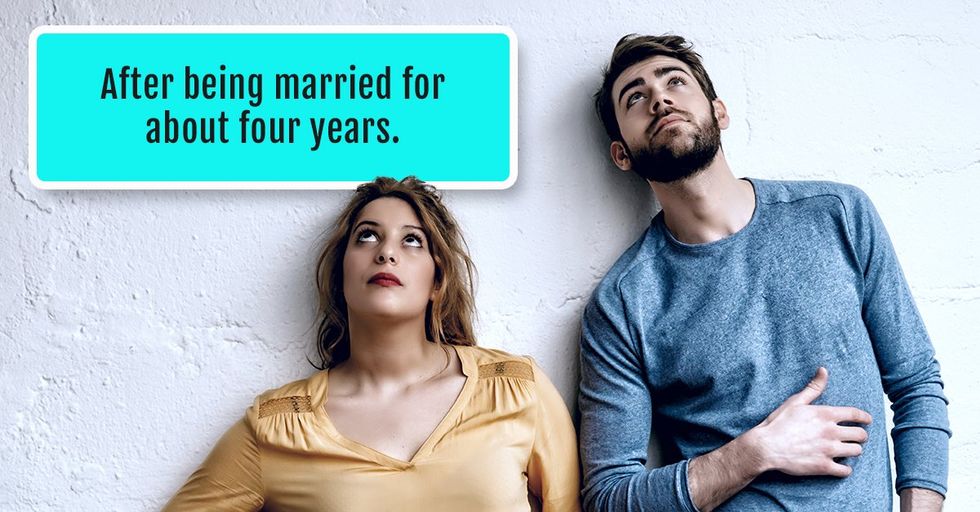 What was the moment you knew your significant other was The One?

We all have that special moment picked out in our minds, where something happened and you said, "Yep, this is it. This is the person I'll be with forever."

After our first date. We talked until the wee hours and then he left to go to his dorm. I thought as he left, "I wouldn't be surprised if he is The One." We celebrate our 20th anniversary this year! –MboteOsali

We had been dating for a little over a year when I was almost killed in a rock climbing accident. While sitting there, looking at exposed leg bones and watching blood and bone marrow spill into the dirt I realized I was really pissed that I was going to die without marrying her. About fifteen minutes later, I realized I wasn't going to bleed to death that day, and decided I'd marry her when I got out of that God-forsaken forest. The wedding was almost a year later, and I was still on crutches, strong painkillers, and IV antibiotics for a post-op infection during the ceremony, but I did it. –tjscollins

I was laying on his couch reading, he was at his computer playing a game with his friend, when he had a break he would come kiss me or just touch me and smile, that moment I knew "Yeah. I could do this forever." –tlobaes

I crushed on her for a decade. Was sure she could barely tolerate me. Timing finally lined up, we spent three days together. I told her I would move to back home to be with her after that three days if she wanted me to. Then I told her I loved her because I was getting on a plane in a few hours and I wanted her to know just in case. I said those two things way too soon and she was not terrified but relieved. She had been feeling the same way. To this day I am still blown away that she could have picked me after that minuscule amount of time. She is very sensible and down to earth. I am kind of a lunatic and full of ridiculous dreams. Thankfully we like similar movies, making pottery, and AFV. –HobGadlingson

I knew the moment I met him, but not necessarily that I wanted to “marry" him. I met him and immediately thought “S**t...he’s for me." After years of us being in relationships with other people, hooking up in the “unattached" times and remaining friends through it all, we eventually reconnected when we were both single and decided to move in together without ever being in a committed relationship to each other. We’ve been together seven years and are getting married this fall. As for him being “the one", I always kind of knew but never believed in that kind of thing. As for how it ended, I couldn’t be happier. –acenarteco

After being married for about four years. –noqnol

I went to visit family in Europe without her - we'd only been together a couple of months when I went, and the trip had been booked for over a year - and found myself browsing engagement rings at a jewelry store we came across in a mall. –fleastyler

I was on an amazing date with this handsome, sexy, intelligent, talented college professor, but the whole time I felt like I was cheating on my friend who lives in England. We’d talked every day for almost a year and had just gotten to be besties. As soon as it dawned on me that I would rather be on the phone with this dude who was over 4,000 miles away than on my incredible date, it just clicked. I knew. Got on a plane shortly after to meet him in real life and Bob’s your uncle. He moved to the US with me and we’ve been married almost 4 years now. –DeterministDiet

We were finally going on our long-planned Japan trip. For a number of years, I'd had the idea in my head that, if I wanted to get married, it would be really cool to propose on top of Tokyo Tower. I was doing packing preparations, the idea of proposing on top of the tower popped into my head, and I remember thinking "I really want to do that". Then it slowly morphed into "Yes, I actually want to do that, with her." So I did. –ReplicatedPenguin

We met when we were both 21, so there came a point when I started contemplating how young we were, and how sad it is that most likely (knowing the statistics on relationships) we would not end up old together. I tried to deal with it in a really clear-headed way, sort of accepting that it just won't happen with this wonderful man, and when that just caused overwhelming sadness, I knew that I wanted to marry him. Which I did. Many years later. Ha to you, statistics! –CouldBeWorseCouldBeA

My husband just told me this tonight. Apparently, he decided and planned to marry me during the first time we did acid together. –lktgrsss

My now wife and I worked for the same company. She got employee of the year and won a weekend trip to big bear ca. It was a big cabin with 3 rooms and her family and I went for the weekend. We were playing billiards alone in the rec area during heavy rain and I remember telling myself “ if I screw this up I’m a fool". Proposed later that year. –taylorink8

We had just finished a stint at the bar after a double shift at the restaurant where we were both cooks. We were walking home to our little apartment in the rain and he was talking about some far-in-the-future plan and referenced 'us' as he spoke about it. I coyly asked, "Oh, so you see me there, in that far-off plan?". And he turned to me and smiled and said, with complete confidence, "Oh yeah, this is it. You're it." –GeekyGeese

We put together a desk and didn't want to kill each other by the time we were finished. That's love, bitch. –phree612

My girlfriend was rushed to hospital a few years ago with appendicitis. It was pretty bad, and by the time she had her operation it had started to go gangrenous and black, and her recovery was longer than normal so she was in hospital for over a week. During the whole time I came to realise how frightened I was to potentially lose her, and during the early stages when she was in pain she kept calling my name and needing and wanting me to be there. All of that made me realise that if I was scared to lose her then, and how much she wanted me there and needed me, that she must be the one. Few weeks later I went to get a ring and proposed a few weeks after that. Been married nearly 2 years now, and it's been, is, and will continue to be wonderful :) –lodius

I asked her out for ice cream done night in college and we ended up staying up all night sitting on my car talking about everything. Then we went and got donuts in the morning after I dropped her off at her place I realized this was by far the happiest night of my life and I didn’t want it to end. I asked her out a week after and asked her to marry me a year and a half later. 7 years have gone by since then and we have a beautiful baby girl and I couldn’t imagine my life without the two of them. –almostworldfamous

We walked around downtown in Minneapolis for hours playing a game. If the stoplight was red, we turned left or right. If it was green, we went forward. We wound up at Candyland and got caramel corn and s’mores. That’s the moment I knew. During our wedding planning, we agreed to not read each other’s vows beforehand. During the ceremony, he read his first. The officiant said “And I swear, they did not read each other’s vows." I thought that was weird. He included a line about falling in love with me when we walked around Minneapolis. So did I. There was a lot of crying. –PandaProphetess

She was driving us back from a great camping trip with friends. My mind was wandering and I thought, "You know, I wish I could do rad shit like this with her forever." Then I thought, "That sounds like a marriage... HEY!" I looked over at her, she glanced at me and smiled back. I then put together a plan; I ask her to live with me in 6 months when her lease is up, after a year if s**t is still good I'll ask her to marry me. I did exactly that. We've been married 4 years and have a 1-year-old. –Ganglebot

She farted under the covers and forcibly buried me under it and said "I'm helping you keep warm! Appreciate my products!". That's when I knew. –Caress-a-Llama Share this with "The One" in your life and tell them your moment!