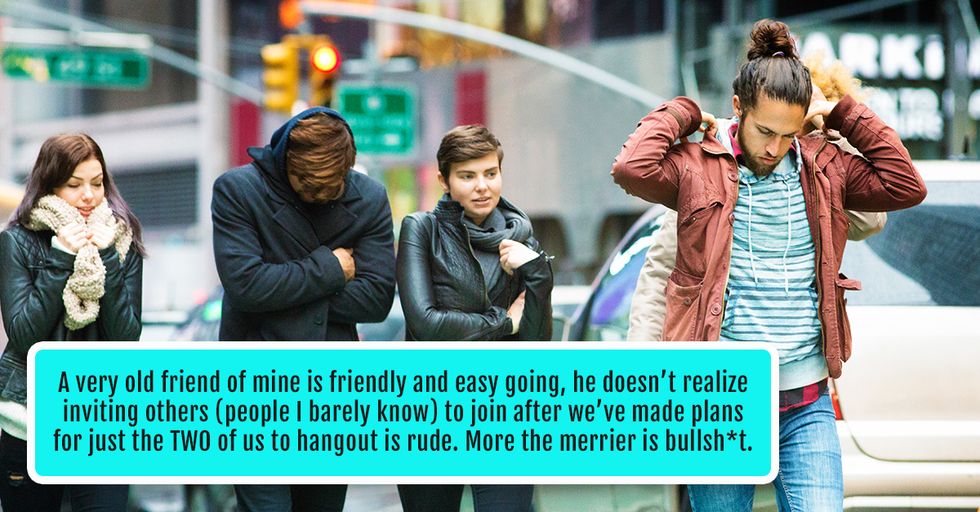 Everyone has certain habits that drive others bonkers.

But conversely, we also have our good traits – the parts of our personality we're super proud of.

Turns out these so-called "good" traits can actually be annoying too – at least, according to others.

Here are the "good" personality traits that get on people's nerves.

Reddit user Action_Heroine explains, "that specific kind of extroversion that's really high energy -- the kind that makes people really good at fundraising, recruiting, or sales," drives people mad.
"Regardless of someone's other personality traits, I find it overwhelming and exhausting, especially when I don't know the person," she says. Ditto.

2. Being way too easygoing

Have you ever been around a person who goes with the flow so much that they literally can't make a decision? They can be super annoying.
Reddit user ImpoverishedYorick explains this phenomenon best:

[...] Sometimes you get stuck in a situation where there's a standstill in the group because everyone's being too nice and waiting for cues from somebody else. You just want someone to stop being nice, make up their mind, and be assertive. "What do you want for dinner?" "I dunno, what do you want for dinner?" "I don't care. I'm fine with whatever you want to have." "I mean, I could go either way." "Do you like food? I'm impartial."' "I don't even know what I want. What was the last thing you had?" "WE'RE HAVING CHINESE. EVERYBODY SHUT THE FUCK UP."

3. People who always have to lead

Leaders – particularly the good ones – are always nice to have around. They organize people, help teams focus on a goal – they're super useful.
The problem comes when they literally can't stop leading. Here's the thing – people tend to be super good in certain situations but not others. Learn to step away when it's not your wheelhouse.

4. People who love their jobs waaay too much

Listen, we get it. You love your job, and want everyone to share in your enthusiasm. Problem is, not everybody does. Especially when you insist on extending meetings and such.
An example of this, as Reddit user tictac1 explains, is:

[...] People in management who (with the best of intentions) work 60 hours a week. The whole, "I expect the best from myself, and my team", kind of bullshit. I'm glad you have the drive, dedication and satisfaction from your job to ignore every aspect of your personal life. But that is not a lifestyle decision you can make for other people. If the workload is that bad, you are either managing poorly or need to hire more people. And not having adequate staffing is the same as poor management. Or indicates a much deeper issue with the company itself.

Bubbliness is a lovely trait. It's also a trait that's expected of certain people (read: young women, people in service and sales, etc), which means that certain people sometimes have to fake it.
Here's the thing – if being hubby and cheerful is not your default, then don't force it. Too much cheerfulness can be grating – especially if its faked.

We've all experienced this at some point or another. We're talking to somebody, and they just keep complimenting us – our hair is amazing, or our clothes are stylish, or we've lost SO MUCH weight, etc.
While all this is amazing, it can begin to seem forced. Just give one or two compliments and then move on. Otherwise, it'll seem way too much.

Have you ever been around someone who always likes to look on the bright side, even in the most dire situations? Those people are literally the worst.
A Reddit user with an unprintable user name (read: explicit) explains:

That reminds me of someone who low key criticized a friend who was dying from cancer for being depressed. Really annoyed me because I'd be pissed to if I died young. You don't have to be positive when you're dying.

Imagine having one of these horrible creatures show up at your wedding. There they are, all gleaming teeth and amusing anecdotes, drawing attention from you on your special day.
It's not that they're narcissistic, exactly, it's just that they just sparkle so much that all eyes are on them – constantly, and at the expense of others.

As Poprortop explains, "[...] there's a big difference between, 'Hey dude, how are you feeling?' and 'I feel bad for you, dude.'"
There's a thin line between empathy and pity. While both look very similar, pity is problematic and can make you feel worse than when you started off.

10. People who invite others to hangout when you've already made plans

A very old friend of mine is so friendly and easy going, he doesn't realize inviting others (sometimes people I barely know) to join after we've made plans for just the TWO of us to hangout is rude. More the merrier is bullshit.

Precisely. This is the definition of rudeness.