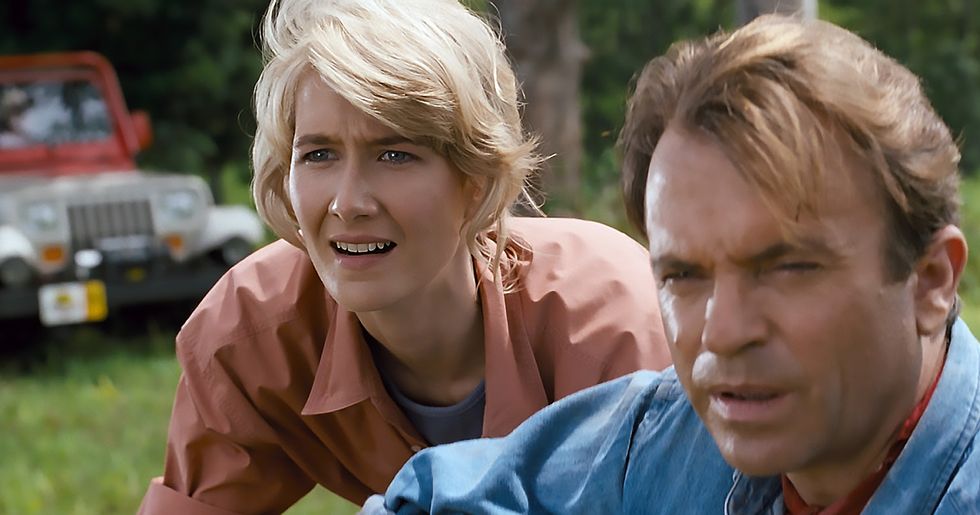 Movie Scenes That Have Given People Goosebumps Time and Time Again

Has a movie scene ever given you chills?

For me, it's the scene in The Lion King when Simba finally takes his place on Pride Rock and roars and all the lions roar back at him. Or the scene in A Little Princess after Sara's father was killed in the war and she's been banished to the attic and wakes up to snow blowing into her room and bows to her Indian neighbor. Oh! Or the scene in Dead Poet's Society when they all stand on their desks. Or the scene in The Goonies where they decide not to go up the bucket and keep moving forward. And maybe slightly embarrassingly, the scene in The Parent Trap when Hallie and Annie figure out they're twins?

There are probably a million more that I'm forgetting. I love movies that make me go all tingly. Sometimes movies just really hit whatever neuron it is that controls goosebumps in your brain.

Here are some other peoples' favorite goosebump moments from movies they love.

Yes, this times one million.

The Brachiosaurus scene in Jurassic Park. The way you see the actors react to seeing a dinosaur for the first time gets me every time. John Williams beautiful score is just a cherry on top and really just adds to that moment of awe. -i_say_uuhhh

Tom Hanks is amazing in this scene.

There are a lot in Harry Potter.

When Professor McGonagall calls for the statues to protect Hogwarts in the Deathly Hallows. It's a combination of the sound effects her voice and the moment of bringing everyone together to fight. I get goosebumps, every single time. -joyousjoy23

My name is Inigo Montoya...

The Princess Bride. Inigo Montoya's vengeance. That entire scene is brilliant but the last line at the end. Every. Single. Time.

Characters realizing their own potential always gets me, too.

When I went to see this in the cinema I thought he genuinely wasn't 'the one' and I'm sitting there thinking of all the possibilities of how they were going to continue. When he stopped those bullets I got a feeling that has only been equaled a couple of times since. -ChiefMedicalOfficer

I apologize in advance that this may not be the last Now and Then scene in this list.

This scene is so nerve-wracking.

Michael Corleone in the bathroom before going back out to the restaurant. -stars154

Absolute chills from this one.

When Moana walks up to Te Ka and says, “you know who you are, who you truly are" and then Te Ka closes her eyes and they touch foreheads. -ihearbuzzing

Basically all of Hook, but especially this scene.

In Hook, where the kid touches Robin Williams' face and says “there you are Peter". -JazinAdamz

There are also a lot in the Lord of the Rings, but this one especially.

This Guardians of the Galaxy scene makes people feel it.

I love the scene in guardians where they all hold the power stone. Chills every time. -Ryan_McGod

This one is so good.

When Miles gets his powers in Spiderverse. -UnknownCat13

This is a weird choice because it's not as emotional as the rest of these, but I do love this movie.

If you only remember Babe as "that talking pig movie", you're forgetting that Babe is actually a masterpiece.

Which reminds me of another one of my personal favorites.

Basically the entire movie of Fly Away Home.

Cool Runnings is a gem.

Cool runnings when they break the bobsleigh and walk to the end. -klimtom

This is a children's' movie?!

The Passover sequence in Prince of Egypt. -ephemeralcitrus

The sweaty drum solo from Whiplash.

The final performance in “Whiplash". -ST2BME

These are scary chills.

When the alien walks across the screen in the birthday party scene in signs. -Crypto_Psyrin
Also, Joaquin Phoenix saying, "Move children! Vamonos!" makes me laugh every time.

Really any montage gets me.

Every time Mulan climbs to the top of that post at the end of "I'll Make a Man Out of You." Every single time. -DakRev

Did you think we'd get all the way through this list without a Star Wars one?

"Let me look on you with my own eyes." -Dulycious

Ok, another Harry Potter one.

In Harry Potter and the Goblet of Fire when he comes back with Cedric's dead body and everyone starts cheering before they realize... -touca-nlover

Always gives me chills, too.

When Red gets released in Shawshank Redemption. -Clumbo94

This is a good one.

How To Train Your Dragon, the scene when Hiccup first rides Toothless. After he loses his cheat sheet and they both plummet towards the earth and you think it's all well when Hiccup gets his way back in the saddle only to have them still plummeting along the mountain edge and having the rock formations coming at them out of the fog. That moment where Hiccup instinctively controls the tail is the part that gets me every time. -Dezbar

Ok confession time: I've never seen any of the Avengers movies, but a lot of other people love this scene!

And we haven't even entered into Christmas movie territory yet!

So many good ones.

Like when Kevin's family comes home in Home Alone.

The last scene in It's a Wonderful Life when everyone pitches in their money.

And finally, I leave you with the scene that gives anyone with a heart the most goosebumps of all time.

And, let's be honest: many tears. Are you ready? Do you have some tissues? Can you devote the rest of your afternoon to sobbing? Ok, here we go...

The last scene from Homeward Bound!

Have fun crying all day!