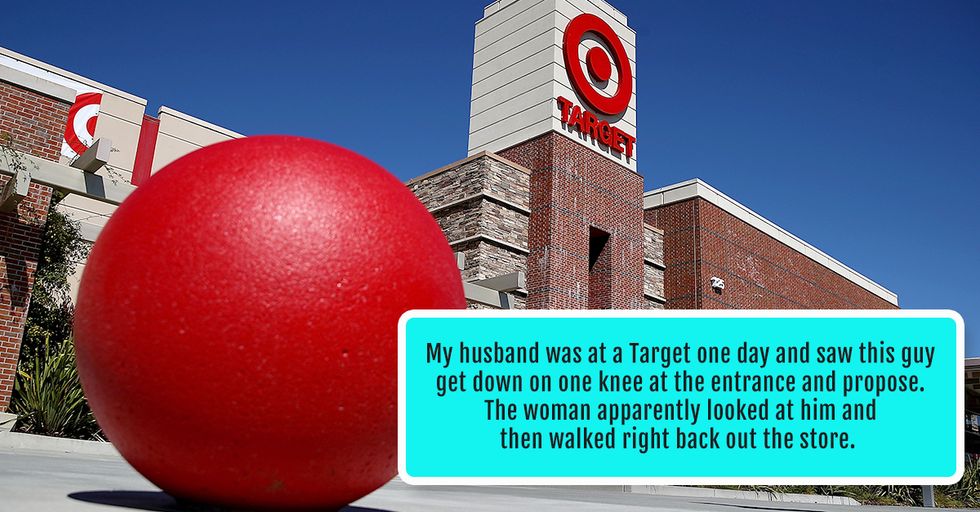 These stories are sad, cringe-worthy, and totally rough in the best slash worst ways possible.

Here's a piece of advice: Maybe talk to your partner and make sure you're on the same page before you ruin everything with a public proposal gone totally wrong.


And men! Hot tip: Marriage is not going to fix relationship problems! Public proposals when women don't want or expect them, or when you propose to try and trick or guilt the woman into saying yes, is a form of abuse! There's a pattern to many of these stories, and, well... it's not flattering, guys.

I had left my ex due to the fact that he cheated on me with both men and women. And every time he would get too drunk, he would confess to me that he was gay. He was distraught for weeks and asked me to meet him in person to talk so I agreed. He proposed to me in the McDonald’s parking lot and I said f**k no. –blairsmash

Not me but my husband was at a target one day and saw this guy get down on one knee at the entrance and proposed. The woman apparently looked at him and then walked right back out the store. –CatPatronus

He invited his family from Italy, my family from Delaware and had an event on my birthday. Where he was SO SURE I'd say yes... I'm not gonna lie I felt bad for a few minutes. –scorpiolafuega

I wanted to propose to my wife at our favorite pub on New Year's Eve, right as the ball hit zero, with her sister and her sister's boyfriend in attendance. She somehow got wind and put an absolute stop to it. She did not want to be proposed to in public and made it very clear she would say No in as public a manner as possible if I still did it. So I delayed the proposal two months until the end of February on our Valentine's Day date (I had been out of town for two weeks starting on the 13th). Took her out for dinner, then took her to our favorite spot on the mountain that overlooked the entire city and the lake and the cruise ship and did it there at midnight. Public proposals can be really tacky if not done right or if you don't know your partner. –Broken_Polls

A friend and I once climbed to the top of the O2 / Millenium Dome in London. It's a whole thing where you have a guide, and you put on safety equipment and you climb up the dome with about 30 others in single file. Once at the top the guide told us about a previous climb where a guy proposed to his girlfriend, she said no, and they had to climb down separately with him crying all the way. –nurseclank

Not me but a friend. She went to London for her college exchange program and had a beautiful love story with an English guy, then came back and they were talking on Skype almost every day for a year. She started having second thoughts and he asked what he could do to fix it. She told him to come to Brazil so they could see if the magic was still there. He booked a flight the next day. After two great weeks together, he was even more in love and she decided she should move on. She took him to the airport and he proposed right at the gate. She said no and left. Brutal. –Dehast

My girlfriend's boyfriend before me proposed to her. It was at her favorite park. So really, it was a nice proposal. The problem was it hadn't even been a year since they started dating and they were having problems at the time. She clearly saw that they weren't working and wanted to break up. He pretty much just wanted someone to raise his daughter for him. She broke up with him and had to drove him home while he cried. He then threatened to kill himself. He's now married to someone else who he proposed to after only a few months. –AsinineBinkie

Not my story, but my friend’s. A guy she had known from work for about one year invited her to lunch, she assumed as friends because he had a girlfriend for the entire time my friend knew him. Anyway, they went to O’Charley’s, and he started telling her about how he had found Jesus. Apparently, Jesus came to him in a dream and told him that he and my friend were destined to be together, so he got down on one knee in O’Charley’s and proposed. She declined and GTFO’ed. –Stevioso

Because I was in an actual relationship with someone else. And I was also 16 years old. And the proposer was my 30-year-old coworker. A restraining order was eventually filed. –kevinsorboisagod

We'd been friends for about 3 years and I finally agreed to give him a chance and go out with him. He showed up at my work, after 2 dates, when I'd told him the night before I thought we were better off as "just friends". He spent $8000 on a ring, made a spectacle of himself, and refused to leave my workplace parking lot after I said: "Sorry, no". The police had to be called to escort him away. Edit: We are no longer friends. –sweetalkersweetalker

Because when you're recovering from crippling social anxiety and your boyfriend proposes to you at the Trevi Fountain surrounded by applauding people, it makes you question how well he knows you. –NotYourEverydayHero

I once saw a guy propose in a restaurant where he had a fancy violin player come into a not-so-fancy restaurant (Perkins). He made a big scene, and she said: "absolutely not". They both left soon after. It was super uncomfortable. However, my friend told me his co-worker saw the same thing that same weekend at a different restaurant, so either two guys had very poorly thought out ideas, or someone was making a prank video. I search YouTube for it every now and again, but never found it. –chuck_cascio

We had gone on 3 dates. I was Mormon at the time, so that wasn’t entirely unusual. He was really shocked and hurt because I guess he thought 3 dates was plenty of time to know we should be together. Dodged a f**king bullet. –cohen14722

We had been dating roughly four months. I had the suspicion she was also cheating on me with my brother. We went out to a fancy restaurant one evening, like a family get-together thing so my brother was there. Just before dessert was served, she stood up and made this whole speech about how I'm the love of her life... Blah blah. She got down on one knee and popped the question. I was so embarrassed, and I told her no. 'that's okay' she shrugged and went right over to my brother and began sort of sloppy making out with him in front of our entire family. My parents were appalled. I'm still in shock. They've been together ever since. –Blair_Bubbles

It was in front of both sets of parents, and it was the only time in my life, before or since, that I literally heard a voice in my head. The voice said N O O O O. –frankbrutally

I went on a first date with a guy. He wanted to go to a baseball game. I don't really like baseball, but I said ok. Next thing I know, boom! in the second inning the cameras come down to our seat, he gets on his knees and proposes. I freaked out and basically ran away. Turns out he does this all the time so he can sit there for the rest of the game getting consolation beers from people around him. –trjones1

Because she proposed the night of our first date. When I asked her what the hell she was thinking, she tried to explain that she thought we really hit off. I just want to mention, we did not hit it off. She ate most of her steak with her hands and when I was telling stories (to start up a conversation) she looked at me like I was a holy prophet, enlightening her. –Qwerter_Mash

My (now ex) boyfriend and I had been on the rocks, and the relationship was clearly coming to an end. But, for him, that was unacceptable. So, one weekend when we were out grabbing ice cream, he got down on his knee and proposed. I just stood up, told him no, and walked away. I texted him to never contact me again, and that was the end of it. He tracked me down online about a year later and asked if I wanted to join him for a movie, and I just blocked him. –NihilisticHobbit There's someone in your life who needs this thread right now. Share this with them!