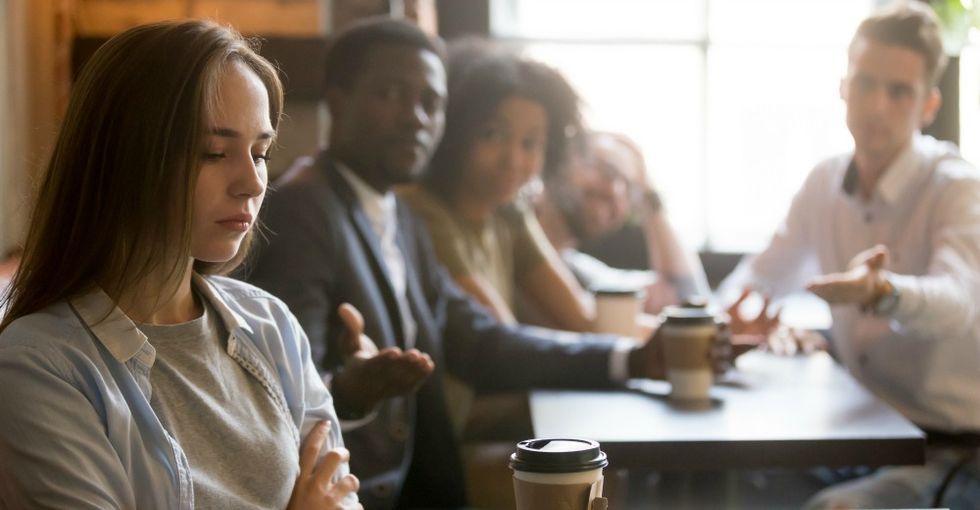 People Reveal The Rudest Questions They've Ever Been Asked

Social interactions can be tough sometimes. We've all had an experience where we've said or done something stupid and ended up putting our foot in our mouth (like these incredibly awkward social interactions that are, quite frankly, tough to read and cause major secondhand embarrassment), and while it can be humiliating, it's usually not something that most people remember for the rest of their lives. There are, however, times when you have such an unfortunate interaction with someone that you never forget it, and still cringe every time it pops into your brain. Rude questions from friends, family members, or, most especially, strangers definitely fall into this category.

The following 30 people reveal the rudest questions they've ever been asked, and how they wish they could have responded. Prepare to be completely appalled and shocked at the audacity of some people.

Although the last one does at least include some delicious karma.

"Are you self conscious about your teeth?"

"I am now."-mmichaeljjjfoxxx Either the person asking this was totally clueless to how insulting this question was, or they knew exactly how insulting it was and were trying to give this poor person a complex.

"How many times have you broken your nose?"

"The answer is none."-BubbaGumm ...but thanks for asking this totally insulting question!

"The most common question asked by complete strangers because of my wheelchair is 'Can you do the deed in it?' but another classic is 'How do you pee?'"

"For all of these questions, I, of course, perform a live demonstration."-jmkep

If you're thinking of asking a disabled person a question that might be insulting, remember this handy advice: don't.

"How does it feel to be cheated on?"

"...by the friend of a girl I once dated. I didn't even know she was cheating..."-Silent_Killah What a great way to find out that your entire relationship was a lie! Did she kick dirt in his eye while she was at it?

"I've been asked if the government gives me compensation for 'being legally a midget.'"

"I do not have Dwarfism, I am just really short."-Haxicab Firstly, "midget" is an offensive term, dude. Secondly, what does "legally a midget" even mean?

"Our first day there, a local that we were talking to put his hand on my little round potbelly and said, 'You'll be a mother soon! How wonderful!'

I was just kinda chubby and was wearing an oddly fitting dress.

I cannot stress this enough: NEVER. ASK. A. WOMAN. IF. SHE. IS. PREGNANT. UNLESS. SHE. IS.GIVING. BIRTH.

"I'm a Freshman in high school and I'm a ridiculously lonely guy."

"These two girls came up to me a few months back and asked, 'Hey, you're not gonna shoot up a school because you don't fit in are you?'"-TheGreatUsernameToo Even if she was kidding, this is just not a question you should ever ask someone.

"I work in a pharmacy, and a not-too-smart woman stared at my face and asked, 'Do you have pox?!'"

"Uhm, no, I do not have this (mostly) eradicated disease, I have some zits. Thanks for pointing that out."-Snusmumrikken Some people just shouldn't be allowed to speak.

"'Were you abused as a child? Do you still have contact with your dad?' after saying I'm lesbian."

"I've been asked similar questions many times. The fact so many bigots think this is the reason for gay women pisses me off."-alyseischeeky How is it possible that so many people think the same incredibly offensive thing?

"What kind of Asian are you? I have never been with an Asian girl before, want to be my first?"

Just treat people with respect. It's really not that difficult.

"So which of you is the girl in the relationship?"

"Neither. Neither of us is the girl. We are both men."-Vertraggg

There is no girl. THAT'S THE POINT.

"'Are you his nanny?', asked an old lady while I was out walking with my son in his stroller."

"I am mixed black and white and look brown, but my son is white, blonde-haired and blue-eyed."-hardly_ever Not cool, old lady. Not cool.

"Why are you depressed? Your life is awesome!"

"I thought it would be fun to try out being depressed. I'll quit next week if it isn't fun enough."-apefeet25

This may surprise you, but depression doesn't care if your life is awesome. And telling someone to just "be happy!" does literally nothing.

"Have you noticed how much weight you gained?"

"My friend's stepmother while she was giving me a haircut. Ironically I had lost 20 pounds from the last time I saw her."-DaArbiter225 She should have replied, "Have you noticed how you're a terrible person?"

"There have been some pretty awful ones regarding our decision to have an only child."

"The one that makes me want to react violently is, 'What will you do if something happens to him?' I thought we were past the heir-and-a-spare days, but apparently not."-tipsycup This one is just downright disturbing. Why on earth would you ask someone this?!

"My dad died in a horrific accident over spring break, and I had to witness the whole thing. It was a boating accident in Florida."

"So I get back to school, and this kid, knowing full well what happened, said 'Hey man...So how was Florida?'"-[deleted]

I don't condone violence, but seriously, this kid is just asking to get punched in the face.

"When I announced to the people at my local church that I was engaged..."

"...a women came up and politely asked if my fiance was overweight too."-Kokopolo Why would she ask this? And why would she care? Also, just....why?!

"While working the front desk at a hotel. To note, I'm female."

Guy: Is there a male on duty?

Guy: Oh...well I was looking to ask for some verbal directions, but if you're the only one here.......do you know how to use google? They have this thing that's called Maps (he actually spells out the word maps), I can direct you how to use it?"-Catona

Google? What is this thing you call Google?

I have vitiligo on my face. Most frequently asked question I get: "What's wrong with your face?'"

"Walking through Costco with my wife, who is average height, and 2-month-old twin daughters.

An older lady walks up and asks, 'So are they going to be normal?'"-mitnamdor

"Normal"? What does "normal" even mean?

"I'm not with her anymore, but I got that all the time when people saw pictures of her on my desk. I'm not classically handsome, but it's kind of surprising how people could be so shocked that a beautiful woman would date me."-chili_con_carne Wait, this guy isn't "classically handsome"? Who cares if he's a kind person and a blast to hang out with! Noone will EVER want to date such a ghoul!

"Upon people finding out I'm adopted: 'Do you ever want to meet your REAL parents?'"

"I've met them. They raised me. Please go away now."-TheBlueWombat Yes, please take your insulting questions and go away forever.

"Are you anorexic or something?"

"Yes....and still working on being healthy."-chelseybug You never know what types of struggles people are going through. Maybe try offering help instead of judgment.

He should have responded with, 'Well, you look ancient. I'd rather like 15 than old and decrepit like you.'

"'How will you treat mentally ill people if you're mentally ill yourself?' Thanks, mom."-sbreland5 Oh, Mom. You always know what to say to make your kids feel truly awful.

"Are you pregnant? Wait you're too ugly to have anyone have sex with you."

"Granted, this was a resident with Alzheimer's, but it still made me sad."-tseadog

"You ain't gone steal nothing are ya?"

"I, a 6'1" black man with long dreadlocks, was asked this as I walked into a gas station by the clerk."-kidaku This is the definition of racial profiling. I would have walked immediately out and never shopped there again.

A 13-year-old girl asked me and my siblings, "Do you all have the same father? You don't look the same," and then pointed at me, "especially you. You look way different from them."

"It is true that I have a different father than them, but that's a family secret that not even my siblings know."-Japazillion So this little girl was definitely a witch, right? We can all agree on that?

"How can you be studying a scientific degree if you are religious?"

"Well, pardon me for being open-minded. I'm sorry that so many people think the two are mutually exclusive."-Hatguy115 I would have referred this person to that famous piece of scripture where Jesus said: 'Mind yo business'.

"A newly hired manager at an old job decided to ask me these questions, seeing as how I'm a Muslim:"

"'Why do you blow people up?' and 'Do you also beat your wife?' Then one day armed SWAT officers showed up looking for him, and he never showed up at work again. We never did find out what was going on, but I took it as karma."-uniquecannon Sweet, sweet karma. Is there anything better in life? Well, that's not all the rude people in the world... sometimes people are rude by their actions, not just their words.