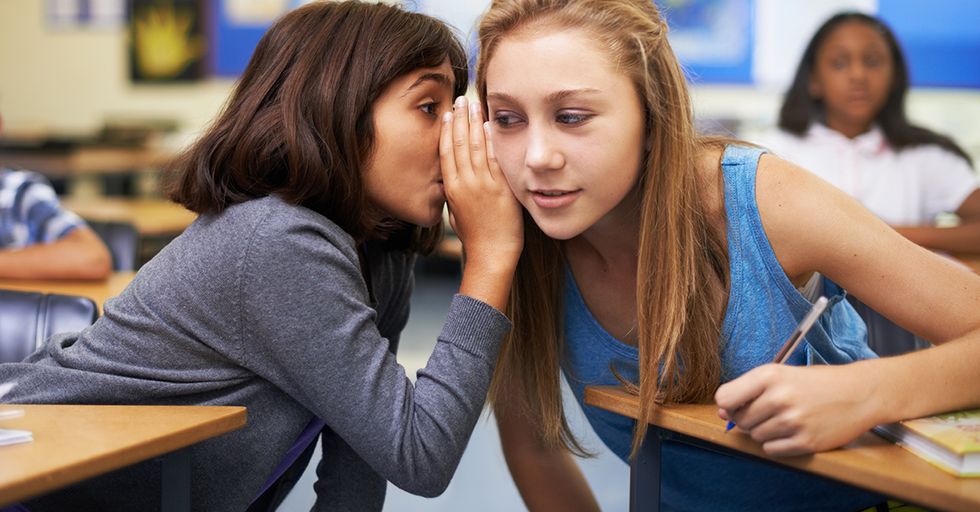 19 People Reveal the Weirdest Rumor They've Ever Heard About Themselves

Have you ever found out that people were spreading rumors about you?

It's a very strange feeling.

Nobody knows exactly how they get started, but rumors often run rampant through groups of people of all ages.

Even in elementary school, kids start spreading rumors about other kids, and it continues well through adulthood. (Although, if you ever find yourself being told a rumor, it's probably best to keep it to yourself). A recent AskReddit thread gave people the chance to share the weirdest rumors they ever found out about themselves. There are some real doozies on the list.

Every school has rumors about the teachers who work there.

Teachers always get the best rumors about themselves. I have been the "father" of about ten students over the years. I have been brother, husband, son to a female teacher on campus. Once I was covered from head to toe in tattoos, but only where my clothes didn't cover. I once killed a guy in self-defense. I was a secret millionaire. You name it, the students have thought I was it and shared the story. –Spodson

Talk about an exaggeration.

In high school, I had to call 911 for my mother, who was having a medical emergency. The school bus that runs through my neighborhood got stuck behind the ambulance, which was blocking the street. The next day of school, I found out a rumor had spread that I'd snapped and killed my family. –Miki_Kristiansen

I was 18 when I had my first relationship, so I went through a couple of years in high school without one. Someone started a rumour that I was gay, and that this was the reason for me never dating a girl. (In truth, I was just outright horrible with girls at the time.) My best friends found this hilarious and they confirmed the rumour everywhere they went, making it even harder for me to find a girl to date. All worked out in the end though. –ehamo

That I wore bicycle helmets when I drove my car. –EthanEuan This one is great because it's more ridiculous than harmful. This next one? Not so much...

Way to jump to conclusions, guys.

I recently discovered that people at my high school thought I was dead. The truth is that I was rushed to the hospital (appendix) during my final exam week. Since that was the end of school, and I moved to a different town immediately after I'd recovered, it became "common knowledge" that I was dead. –moon_monkey

Here's how to find out who your true friends are.

When I was a senior in high school I didn’t make the dance team after being on it since 7th grade. It was all very political. That night I cut up my uniform into little pieces while sobbing. I put all the pieces in a bag in my closet and I told one close friend. She proceeded to tell most of the dance team and somehow the story became I cut up the uniform and threw it in my coach’s face. Things got even more dramatic because the story got back to the coach. A team mom called me and pretended not to know the story and just happened to mention that I needed to return my uniform or I would be charged $150. The thing was, they didn’t track the uniforms at all so there was no way they knew I had it. Luckily, another (better) friend had her old uniform in the same size. Nobody knew due to the lack of tracking so she gave it to me. When I handed it in it was the most satisfying feeling. Those b*tches were so surprised to see the uniform in one piece. –emoknapsack

I'm guessing they weren't invited to any parties after this.

In high school, I got a rep as a snitch for calling the cops on a party I didn't even know was happening. I have called the police exactly once in my life and it was six years after I supposedly did this, and it was to report a hit-and-run when a dude drifted his car into a building. –TheLemurian

That word doesn't mean what you think it means.

"He mows the lawn naked." Um, gym shorts and a tank top is not naked. –FredericHerbert

In high school, people believed that I had six toes. I don't even know who thought that up and why they were thinking about my toes. –mikkeldaman This next one is hilarious...

That's not my name!

That my real name is Barry and I changed it because I hated it. It emerged after someone overheard me mentioning that my dad never remembered my name (he would call me his brother's name all the time), and my friends and I joked he would eventually just start calling me random names, like Barry. Well, someone overheard, misunderstood, and off the rumor went. Suddenly people I barely knew came up to me asking "Your real name is Barry?!" –StoolToad9

Their hearts were in the right place.

I had shingles when I was a kid and missed a couple of weeks of school. One of my friends told everyone that the shingles had made me go blind, everyone believed him, even the teacher. The entire class made me condolence cards and get well soon cards expressing how sad they were that I couldn't see anymore... This confused me and my parents a great deal. –uncle_monty

That I died and got replaced by a clone... Yes. My friends were on drugs. –densi64

High school logic at its finest.

I skipped my last 2 years of high school and didn't bother telling anyone in my class. A few months later, my old friend tells me that the two working rumors were that I had joined a cult or killed myself. Nobody bothered to think, "Hey, maybe he moved." High school logic. –Duounderscore

Just go with it, I guess.

"She has a ton of boyfriends." All the girls asked me for advice. I thought they were legit joking until one ridiculed me for not sharing anything. –toffeecoolers This next one started out rough but resulted in a lifelong friendship...

That's one way to make friends.

When I was in HS there was a rumor going around that some kid wanted to beat me up. I had honestly never even talked to this dude, much less started sh*t with him. I finally "confronted" him about it and he said he had heard the rumor too, but that it was bullsh*t. We're still good friends to this day, and to this day neither of us know who started the rumor or why. –meltedlaundry

This makes me glad I wasn't one of the cool kids.

Once at high school (UK) I was jumped from behind, took a single punch to the back of the head (how brave) before defending myself and the fight was broken up after a very short scuffle. The rumor I heard walking out of the school gate that day was that I was beaten so badly I left school in a wheelchair and would never walk again. Apparently, when one of the "cool kids" jumps you from behind and still doesn't win the fight, the rumor mill makes damn well sure people think they won the fight. –xXPMMEXx

I love this person's reaction to the rumors!

That I was making money by "financing abortions" for my classmates (this was in my senior year of high school in a relatively conservative area).

When I was in school there was a rumor that I was a vampire. Some kids genuinely believed it. We were like 15 and it was the beginning of the Twilight craze. In fairness, I'm extremely pale and never showed up before lunchtime, so I was never around at the warmest parts of the day and nobody ever really saw me eat. I can see where it came from. –paragayde

That I would need my hand removed... A staple went through my finger in fourth grade and apparently, people thought my whole hand would get removed. –TraderGabe Share this with someone who gossips too much!