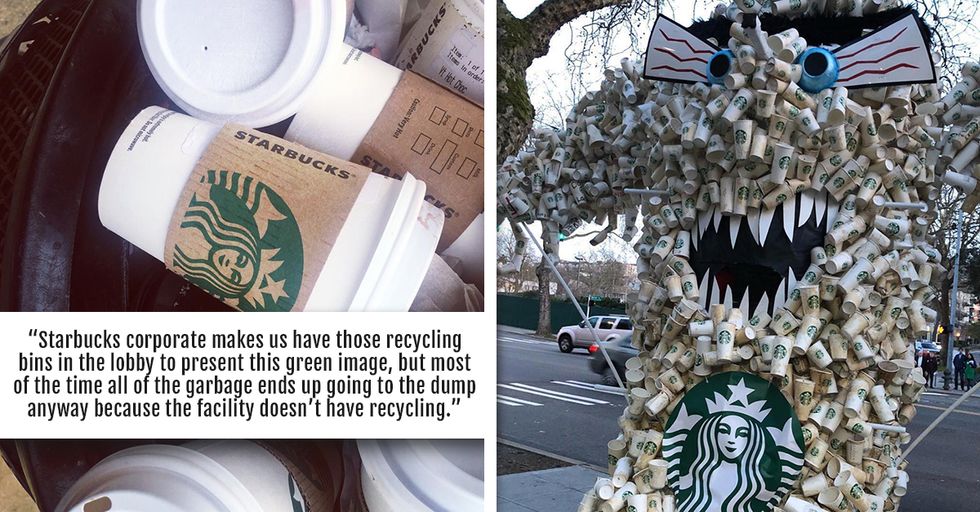 No matter where you work, there's a chance that there are plenty of secrets about the industry that the general public would not even be able to guess. As someone who has had a lot of jobs, you'd be surprised how many companies that seem totally legit are actually hiding seedy or even downright illegal secrets.

A recent AskReddit thread gave people the opportunity to air their own industry's dirty little (or not-so-little) secrets, and the responses ran the gamut from slightly surprising to pretty shocking to OMG HOW IS THAT EVEN HAPPENING?! As you read through these, remember that these things are actually happening in real life. It might make you start to question what industries aren't hiding something unsavory. Honestly, I'm not sure such an industry exists. If you want to join the conversation, feel free to share your own industry secrets in the comment section!

This one isn't really that surprising.

Starbucks corporate makes us have those recycling bins in the lobby to present this green image, but most of the time all of the garbage ends up going to the dump anyway because the facility doesn’t have recycling. –princesscupcakes6

"Can you go check in the back?"

At stores, that magical "back room" where you can just go and pick up anything is actually a huge mess where things go missing all the time.  –Nameless_Soldier

Almost everyone in the TV and film industry is winging it. –WiggleSparks

This makes sense but is still super annoying.

Have you tried turning it off and on again?

Half of technical support going on in the background of major platforms is convincing the developers to care about the issue enough to fix it. Also, every platform that interacts in any way with Facebook, hates Facebook. It's so broken. –omg_really

This is just very sweet:

I work with kids at a daycare. We see babies take their first steps sometimes but we never tell the parents because we don't want them to feel bad about missing it. –theraccoonrobot

The official policy for customer dissatisfaction at a particular Canadian coffee franchise I worked at was: "offer them free stuff until they stop complaining." –aronenark

The amount of toilet paper, random items, and bills used as bookmarks that are left in returned library books. –RelicBookends

I worked at a car wash for three years. When you're on the phone with somebody over speaker inside your car, everybody for a mile can hear what they're saying. Just wait until you're out or don't put it on speaker. –SpacebornKiller

Terrible and illegal things going on in every strip club. Owners only hire people for upper management who they have trusted for years because they all know this. –ImportantArtist6

Animator here. It's coming more and more to light lately, but big animation studios and game companies treat their employees like crap and pay them barely anything and expect them to work hard "because of the love for the job." And they can get away with that because there are hundreds of thousands of other creatives who would be more than happy to deal with all of the BS just for a chance to work at a AAA studio.  –TheArtofDoingScience

I really wish I had known this sooner.

When renting a storage unit you do not need to get the insurance they offer. Even if they say it's "mandatory," it's illegal to force you to get insurance. Also, the rent will increase yearly, forever. –LoweredBap

Funeral homes are businesses, and funeral directors will absolutely take advantage of grieving people. The most offensive to me are the cremation boxes. They're literally just big cardboard boxes and should cost less than a hundred dollars. But they also make really expensive boxes, and directors will say things like "grandma would be more comfortable in this." No, she won't, because she's dead. Some of these boxes reach 1000 dollars, and of course, are all just burned. –Loktharion

Note to self: Avoid mobile homes if possible.

Mobile Homes are cheaply made and mass produced by people making 9 bucks an hour and don't care if it's up to code or safe. Hundreds of people in a factory with little supervision and the main goal is to get as many made as possible, with little care to protocol, codes, and fire stopping. I got hired as a HUD admin, ended up doing inspections so we could stop getting fined by the fire marshal and the amount of crap that is overlooked and not cared about is infuriating. –TheMudbloodSlytherin

Other academics will steal your work for themselves and publish it under their name. –dudenamedfella

Anyone who has worked in food service already knew this one.

The cooks do all the drugs and always have the best drugs too. –theticofthetac

Everyone cheats on fuel economy and/or emission tests. Volkswagen is just the latest to get caught. –The_Real_otus

Daycare workers say rude things about your family. Usually just the parents and not the kids. –HotTakeBabe

At least they have experience!

People always joke that most psychologists become psychologists because they are crazy. I've worked in close proximity to a bunch of forensic psychs for the last few years. It is true. –silver_fawn

Always assume they can hear you.

In a Call Center, there are lines where Management can listen to the customer while he/she is navigating the phone tree or waiting on hold. It’s used for Quality Control. We hear every line of profanity, racist/sexist remark, and muttered an expletive. Also, many Live Chat sessions allow the Associate to see you typing in live time. A lot of horrible things get typed out, then redacted before pressing Send. Engaging with Customer Service brings out the worst in people, especially when they think it’s in private. –BariatricPressure

This seems so skeevy!

Credit companies will raise your interest rate for no reason and wait for you to call and complain to get it lowered. Check your statements and review ALL notices that come with your bill. –fishead62

I'm going to think about this every time I'm at the doctor.

Almost every registered nurse has what is called a blacklist of doctors she or he would not want even remotely near them should they need emergency services. People need to take better care and precaution of who they choose to accept as their doctor. –heftyhotsauce

Something to keep in mind.

Hotels are held together by more superglue and duct tape than you know. Doesn't matter how nice they are. –Dougdahead

This is actually pretty concerning.

I am a Romanian who has worked for a US military contractor. The DOD doesn’t care about the price of the things the military is buying. I once sold a bag of 240 hex nuts for 9000 dollars ( it’s not a typo) which I got for 25 dollars. The spending the DOD does is really as bad as you might have heard of. The more they spend the better. It is actually scary how much money they throw away. –irdumitru

In an auto shop, what your mechanic tells you may not be in your best interest, but instead what is most convenient, and what is the least amount of work to do. –TheAbominableBanana

I don't know that this is a secret but flight attendants and pilots don't get paid while boarding, deplaning, and delays. So when you're delayed and angry, so are we. We're not making money and still have to be there. –boozeandarrows

A lot of restaurants have rats. Maybe not in large quantities and visible all the time, but they are there. When it closes down, their tiny little rat feet are running all over the tables, counters and kitchen equipment. Especially in old, historic buildings and buildings near waterfronts. –TheActualDev

The clothes you find at an outlet (more often than not) are not "cast-offs" or overages from the regular store. There's a whole separate entity that designs and produces clothes at a lesser quality for outlet prices. –CheeseWarden

Is this still considered a secret?

I work in the wedding industry. Every single service you purchase for your wedding has a marked up price because we know you’re going to spend it. –Yung_cho6

When businesses like taco bell, PetSmart or others ask you to round up to donate to a cause it is 100% for the tax write off they receive. They are allowed to donate money and pay less in taxes. Instead of paying from their overall sales and profits they con customers to pay extra to do it for them. This leaves their overall sales intact while increasing their yearly profit by paying less in taxes. If you want to donate just do it yourself and give more then a buck. –infinitealchemics Share this with someone who has their own industry secrets! And don't forget to share your own in the comments!