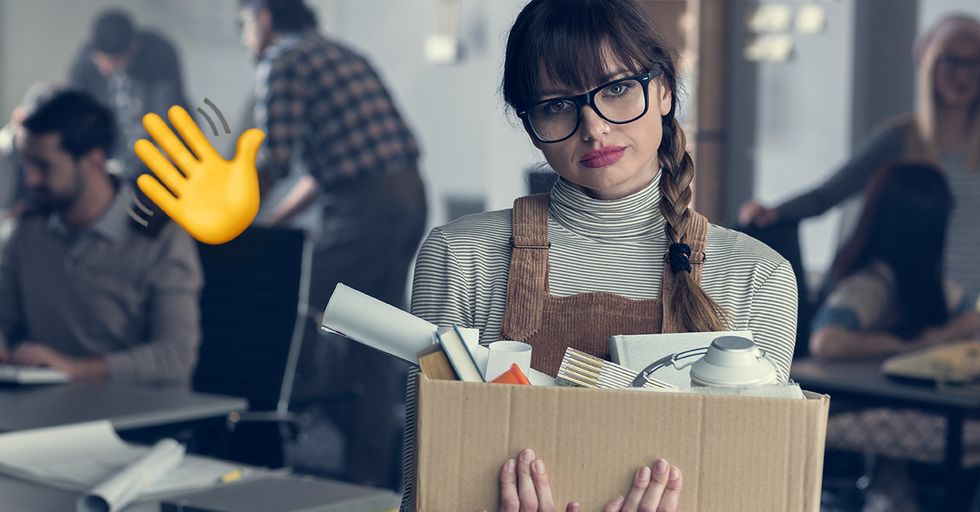 It simply is one of the most important things about being gainfully employed.

When you're happy and secure at your job, everything seems to be sunshine and roses.

When it's not – oh, that's when it's time to beat a strategic retreat and call it a day.

Here are the most outrageous reasons people just straight up walked out of work one day.

User libra00 explains, "paycheck bounced when I went to deposit it on my lunch break."
That'll definitely do it. Most people quit at the very first sign of financial shenanigans – as they should. Poverty is no laughing matter. The reason you work is to get paid. If you didn't want to get paid, you'd volunteer.

I was working at a beer warehouse that did it's own recycling. Meaning I had to dump a bunch of empties into a giant can crusher. It was wet, it was dirty, it smelt awful, but the worst part was that people would often throw out used needles with their empties. We had 'protective gloves' to protect us but they were crap and only used to cover the companies ass in case something happened. I had a couple of near misses with needles but never actually got pricked. Until one day when inevitable happened and I pricked myself pretty bad on a needle. It went straight through the gloves like it was nothing and was literally hanging in me. I told my manager and he said to get back to work and it wasn't a big deal. He even denied me taking the rest of the day off so I could get it checked out. So I told him to shove it and just left.

This is the definition of a safety violation, and we're pretty sure there are multiple laws against this sort of behavior. Thankfully, goblin_goblin didn't contract anything from the needle. As he explains:

Yeah I got myself checked out and I'm fine. That being said, I don't regret walking out. It was my boss's complete lack of empathy that really ticked me off. Thanks for asking!

Boss at the time was a screamer. Couldn't do anything right, and I was a ground man for earthmovers (excavators and the like). I was busy working away smashing concrete, he comes cruising by in an excavator (tink, tink, tink, tink) and for some reason shouts to me 'if you don't want to be here you can LEAVE!' ... Maybe I had a salty look on my face, maybe he's just a twat... but I thought about what he said for 10 minutes or so, dropped my tools on the ground walked to my truck and drove away, never looked back and never heard from them besides my final cheque... fuck you CLAC.

We're not sure what CLAC means, but we do know that a huge part of being a good employee is following directions. Okay, this is a deeply flippant remark – when your boss yells at you to leave, do so with a quickness and never come back.

4. Too good to be promoted

My first job was as a cart pusher at WalMart. I was a teenager and believed that if I worked hard, theyd promote me and move me to a job inside. I showed up everyday and worked my ass off. After about 3 months they promoted a guy who had started after me who was known to be a slacker. When I asked the manager why I didnt get moved inside first, he said ''youre the only one who's dependable out there". It took awhile to let that sink in, but once it did, I went back and told him I quit and handed in my badge. He said "if you just walk out with no notice, theyll never hire you back!". I just laughed and told him that was fine by me.

Honestly, Walmart deserved what they got. How do they literally promote the slackers over the conscientious worker? How does that make sense?

It was my shift manager. I liked the job but good god that manager was something else. Incredibly nitpicky, controlling, and very prone to panic. It just got to be more than I could handle and so I called the store manager on the phone, told her I couldn't take working with this woman anymore, and asked if she would like me to stay until someone else came in to take over for me. She declined my offer and told me to just go. This shift manager was there for about 6 years and upwards of 20 people quit because of her for the same reasons I had.

There's a lesson here – don't be a micromanaging manager. Also, don't put up with one. A very simple premise.

Was working as a butcher at a "high end" shop. Specialty sausages, all natural meats, exotic deli section, stuff like that. On top of the usual shitty parts of working as a butcher (hard work, low pay, bitchy customers, weird hours) the place never had their equipment serviced, never had their knives sharpened, sold frozen hormone fed crap meat as "all natural" complete with "all natural price", recycled expired, and by expired I mean green meat into their hot bar food, forced the butcher staff to work in the deli which led to customer complaints from the blood all over our arms and aprons. This job paid just .50c over minimum wage. One Sunday the owner came back into the cutting room and started berating me for cutting new steaks to replace some old ones in the case that were obviously not going to sell as they were starting to get kinda crusty. He screamed in Polish until he was red in the face, threw his hat on the (bloody) ground and stormed out. I waited until it got really busy, told him to go fuck himself, and left.

Good for this person! But honestly, he should've walked away the minute he realized the meat was bad and the manager was an asshat...

A friend and I both worked for a man who was selling precious gemstones on eBay. We worked from his home and our job was to weigh the stones, measure their dimensions, grade their quality, fill out a description form, match them with photos he had taken, and post them on eBay. We also were given a list every day of stones that needed to be shipped, and we had to find the correct stone, package it, and get it mailed. This guy was selling 25-50 gemstones a day, which meant we were handling a ton of stones. This guy was also super unorganized and scatter-brained, which meant that he would often misplace things, confuse stones, or lose them altogether...and he would somehow always believe that it was my fault. He was constantly telling me to make sure I did things in a very specific way, and then a few weeks later he would ask me why the hell I was doing them the way I was doing them, and he never believed me when I said I was doing it how he told me to do it. My (male) friend learned through chatting with the guy that because he had been through a nasty divorce, he was extremely mistrusting of women. I was left wondering why he had kept me around for so long if he thought I was screwing things up so badly, but I loved learning about different types of gemstones and working with them was fascinating to me. The final straw came while he was out of the country on a mining expedition and had left my friend and me to run things. While he was gone, we were in constant contact with his gemstone cutter via e-mail, as the cutter was also the one who was compiling the lists of addresses where stones need to be shipped. While he was away, the owner had an e-mail chain going with the cutter, and at one point the thread contained information that I needed, so the cutter forwarded the chain to me. Earlier in the e-mail chain, the owner had ranted to the cutter that he was positive that I was stealing gemstones from him. That was it for me. I immediately saw red. I am extremely honest when it comes to things that don't belong to me, and I will not put up with being called a thief. I composed an e-mail that said as much, sent it to both the owner and the cutter, apologized to my friend for bailing, and bailed. Walked right out and never looked back. The owner never apologized to me, but if we run into each other in town now, he is friendly towards me. It was a unique experience, that's for sure.

General rule of thumb –  the moment they start accusing you of theft, it's time to go. Rather than become a part of the problem, make yourself part of the solution and leave before things get awful.

I was working in a tire shop at the time. A guy that I had trained got promoted above me because reasons. So one day I'm changing tires and he starts screaming at me telling me I'm doing this and that the wrong way. I'm like first of all, no. Second, I taught you how to do this, so don't go trying to tell me how to do it. He grabbed me by the shoulder and spun me around so he could yell in my face. He's nose to nose with me, poking me in the chest, telling me I'm fucking lazy, I'm a piece of shit, I'm this, I'm that, ect. I still had the tire bar in my hand and I started seeing red. I had the sense to know that either I walk out of here right now and I'm out of a job, or I brain this douchenozzle with the tire bar, and then I'm out of a job AND I go to jail. I pushed him off of me and dropped the tire bar, walked up front and handed my manager my fob for the time clock and my tool pouch. Gave old dude a "go fuck yourself" on my way out the door, iirc.

Violence in the workplace is no bueno. This user was supremely smart to walk away before things go physical. Also, that guy he'd trained – what an ungrateful douche!

This user with an obscene and therefore unprintable name writes,

Boss got his finger up in my face lecturing me in front of customers. He thought he was being funny, but I slammed the stack of plates down on the table and just walked out the front door. His mom, the boss of the cafe, started to cry cause this was in the middle of lunch rush and she'd be on her own. Should have raised a better man and she wouldn't have had that problem.

He's certainly not wrong. There's a common saying – when you lie down with douchebags, you wake up to find all your employees gone... Have you ever left a job suddenly? Tell us about it on Facebook and share this story with your friends!