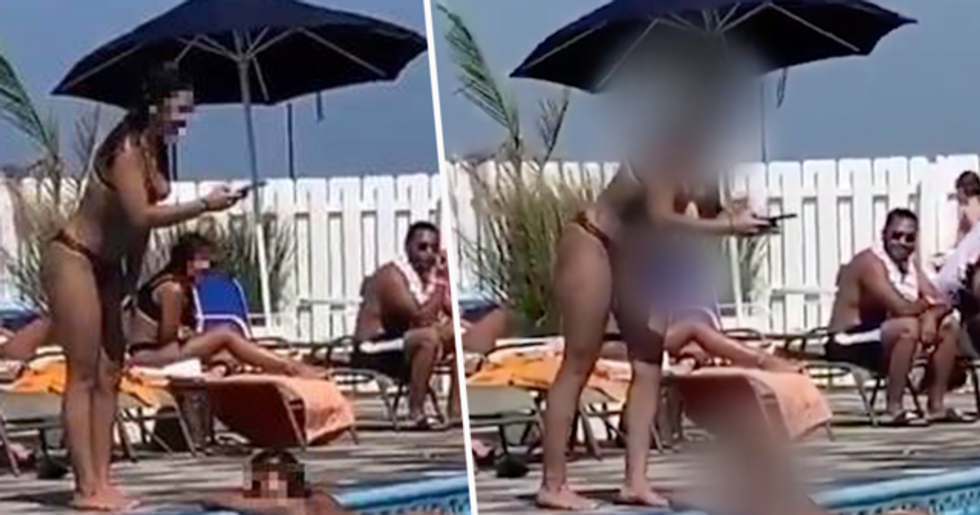 One influencer posing in a swimming pool has absolutely divided the internet with her controversial poses...

When the weather is hot...

It just feels impossible to have your body constrained.

But it's safe to say, swimsuits can get pretty teeny...

Which has been the source of a lot of drama.

Some just can't help being offended by other peoples' bodies!

We were all born naked people!

But one influencer might have taken things too far.

After her controversial poses in a public pool went viral this week.

Some people just can't seem to get on board with others being comfortable!

It seems as though a lot of people are offended by some women's bodies.

And sometimes, it's even to the point where they actually tell women how to cover up. Annoying!

But one in particular has got the internet talking...

A woman was posing for Instagram pictures in a public pool.

But a bystander noticed and thought she was... leaving too little to the imagination.

"This is totally appropriate right?" wrote one.

"It's never appropriate for adults to expose themselves to children in a highly sexual manner. This woman should face charges," another offered.

Another made this point.

"If she were a man she would be arrested and tried for indecent exposure with minors present and then forced to be listed as a sex offender."

But take a closer look.

Although she certainly looks it, the woman is actually not naked.

"She is wearing a bikini top and bottom," explained a viewer.

"It looks like something else because of the angle and the pose for half a second in this edited video."

"If the video was longer 2 seconds before and after, perception would be totally fine."

"This is not an influencer in the wild video."

"Nothing wrong with what she's doing as long as she's wearing something."

What do you make of these controversial pics?

Want to read about another bikini that caused a huge online stir? Read on...