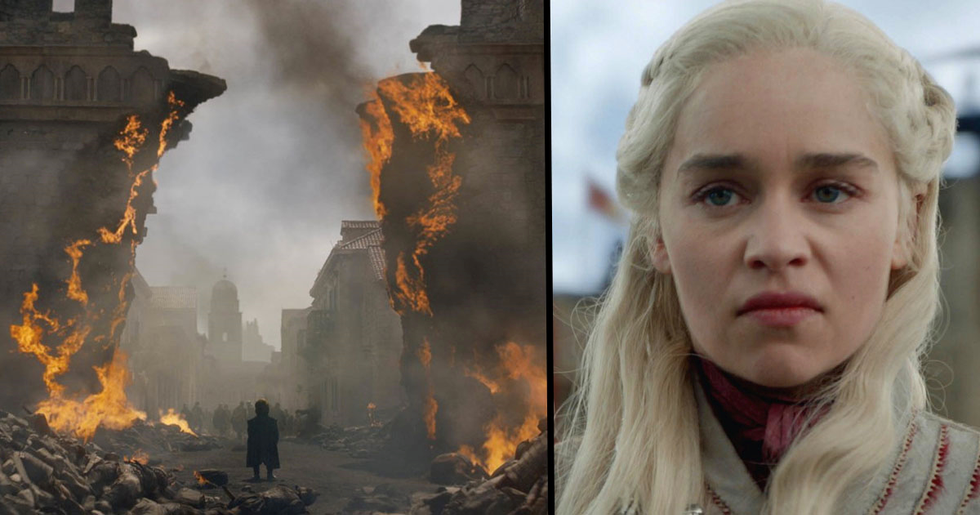 After eight years of twists and turns, battles and bonks, and more bloody deaths than we care to remember, we are finally nearing the end.

With massive plot holes, the demolition of any character development and basically crappy writing, the GoT writers have managed to ruin our favorite show in a mere seventy-nine minutes.

And fans have not kept quiet about their discontent. Far from it.

Twitter is ablaze (not literally, we're not in King's Landing) with bad reviews and feelings of disappointment.

And just wait until you read about the moment that the writers actually forgot their own show's history...

Since Game of Thrones first hit our screen way back in 2011, it has had us on the edge of our seats.

Ahh, look how young they all look! We've watched them grow up on our screens, evolve as characters and now it is all coming to an end. How will we cope? And more importantly, will the writers do them all justice?

There have been so many unforgettable episodes over the years.

One of our favorites is "The Rains of Castamere" aka The Red Wedding - probably the most violent wedding to ever take place on television. And a stark reminder to fans of the show, that no character is safe.

"The Bear and the Maiden Fair" was pretty thrilling to watch, too.

We saw Brienne have to square up against a live bear with little more than a stick as protection. And don't forget, it was during this episode that Theon was gruesomely castrated by Ramsay Bolton. Ouch. We remember that scene like it was just yesterday.

"The Climb" in season three was another winner.

We were literally on the edge of our seats (well, better than being on the edge of a mountain) as Jon Snow, Ygritte and Tormund had to scale The Wall.

And, of course, we have to mention the penultimate episode of season one.

Which saw one of our favorite characters, Ned Stark, be beheaded. It was then that we knew that this was a show that was not afraid to push boundaries.

But as this much-loved show draws to an end, fans have been quick to express their disappointment with how the series has panned out.

Some have even suggested that it has been going downhill since season six. To be fair, we thought that "Beyond the Wall" was pretty annoying. Yeah, the special effects were good but the plot holes were ridiculous. And then it just got worse...

The penultimate episode of season eight has been the worst-reviewed in the show's entire history.

And if you haven't seen it yet, yes, it was that bad. In fact, Rotten Tomatoes has revealed that "The Bells" is the lowest-rated episode ever with a 50% score so far.

Many have referred to it as nothing more than bad fan fiction.

Don't the writers know what is expected of them? Don't they know that they can't pull the wool over the eyes of the diehard GoT fans? Or is it simply that they no longer care?

They seem to think that stunning special effects can make up for glaringly obvious plot holes.

Where to begin with "The Bells," an absolute disaster of an episode that exhibited every bad habit the series' writ… https://t.co/XeC4XXPd5H
— mantouhoo (@mantouhoo)1557741443.0

We mean, we like a fire breathing dragon unleashing its full fury as much as the next person, but why is the dragon suddenly undefeatable?

Not to mention the fact that the writers seem to have forgotten the history of their own show.

But the fans main bugbears seem to be surrounded around Daenerys.

Boo fucking hoo 'I wost my widdle Dwagon and my bestest fwend so I'm going to burn some widdle children' fuck you D… https://t.co/LPeBLywdS2
— littlemopeep (@littlemopeep)1557741422.0

She's a character that we have spent years growing to love and respect and she's suddenly gone full-on mental. True, she has always been ambitious and a tad arrogant (to say the least), but are we seriously expected to believe that she has gone so far over to the dark side that she would just set fire to as many people as possible?

And the way she just snapped when the surrender bells rang.

Yes, we get that she's had a bit of a sh*t time of late - her friend was decapitated by an undead giant and she lost, not one, but two, of her beloved dragons and, genetically, she is prone to being a psychopath... oh, and she was just dumped -  but still!

And even for GoT fans, who are used to a lot of violence and gore, this was a bit much.

Danerys, who has previously fought to stop the raping and slaughtering of innocent people, has suddenly done a massive u-turn and decided to kill a load of them herself. WTF? Are we actually to believe this could happen?

And we are not the only one who thinks that it's a bit (or a lot) farfetched.

We know that she has used her dragons previously to kill others, but it has always been for the greater good. Or at least for her greater good. This mass murder spree achieved absolutely nothing; she had already won. The only possible reason for this outcome was pure and simple shock factor.

And this wasn't the only element of the episode that fans have got their knickers in a twist about.

Honestly what was the point of Arya being in King’s Landing again? Just to say goodbye to The Hound? She could have… https://t.co/4K0rPWZmjZ
— Valencia (@Valencia)1557741152.0

Why on earth was Arya in King's Landing? It just didn't make sense. Like so many other parts of this episode. #Frustrating

Was it just for the sake of putting her in danger?

We get that Arya is the show's star,  the hero amongst a load of villains, but at least give her a decent storyline if she is going to appear in an episode. Very disappointing.

But this wasn't nearly as disappointing as the way that the writers have completely demolished all character development that has been built up in just one episode.

It just felt so rushed and hastily put together. And lazy. Definitely lazy. Let's just throw in a lot of fire and CGI and, hopefully, no-one will notice that we have literally given up on the show's main characters. Why not just kill everyone now?

All the main characters have become either pointless, boring as hell or clinically insane. Come on, your fans deserve more than that!

And we've somehow ended up hating the one character that we have been rooting for all along.

And even worse, feeling sorry for the villain of the piece. It's confusing. And not in a good way.

What have they done to wise Tyrion?

He's one of our favorite characters! He seems to have completely lost his marbles. Literally overnight. Are we expected to believe this?

There is no way he would be so stupid as to not see what Daenerys is capable of. And setting Jamie free is just asking for trouble. Will he make it out alive in the final episode? We are not so sure he will. A woman scorned and all...

And although many fans were pleased that Lord Varys finally died, some were disappointed at how it came to be.

Did everyone have to die at the hands (or mouth) of the dragon in this episode? Again, it's a bit lazy.

And don't even get us started on Jamie's redemption arc.

Or the fact that it's gone completely out the window (much like Bran in season one). Seriously, what was the point of it all if he was just going to end his days back with that b*tch. Another major disappointment.

And, seriously, what was the point of Euron stabbing Jamie in a cave?

We know that those two were hardly bosom buddies, but was a fight until death really needed? The whole scene just felt unnecessary and a waste of precious minutes of an episode that was already trying to cram in too much.

And then yet another death caused by the dragon (or at least as a result of the dragon's actions).

How many characters despised Cersei? How many people wanted her dead (or at least should have wanted her dead - we're talking about you, Jamie)? But in the end, she was killed by rocks. Seriously, writers. Rocks?

Surely having her killed by a Stark would have been more fitting?

She should have been slowly tortured or had her body parts cut off one by someone. At least being killed by Arya would have some f*cking meaning? Even the actual dragon would have been better than rocks!

Even Cleganebowl was a letdown for some fans.

Yes, it was pretty damn epic to see Sandor leap to his death with his undead brother but it somehow felt a bit... well, flat - like it was written in just to appease fans after a truly sh*tty episode.

Some are even going as far as to say that the whole of the last season has been poor.

Think it's time we just admit that this season of #gameofthrones has been shockingly bad. Character developments de… https://t.co/m43YWloKRt
— Paul Doc (@Paul Doc)1557742846.0

And we have to agree that some of the action, which, despite being good, has overshadowed the importance of actually sorting sh*t out in the final season. Tying up loose ends. Fulfilling prophecies. Giving fans closure. You know, all that super important stuff.

The general consensus is that it has been unnecessarily rushed.

It's not the fact that our favorite characters are dying, but more that their deaths have been pointless and just not good enough. Like, we understand that Danerys is p*ssed off; a lot of bad sh*t has happened to her. But are we really expected to believe that she would go off the rails so quickly? She's had some pretty bad experiences in the past, too, but she's always chosen to be a good person.

There are some fans, though, that honestly enjoyed the episode despite its problems.

@AnnieBecky Tbh i wanted this level of emotional trauma from every single episode this season. I can honestly say t… https://t.co/lcUtsiKPko
— Spooky🎃Spar✘🇦🇬 (@Spooky🎃Spar✘🇦🇬)1557741432.0

We guess some people just like to watch a lot of death and destruction regardless of plot holes. And fair play to them. Us, on the other hand, we need things to make complete sense.

And now all that is left to find out is who will finally take the throne?

And who will actually be left alive... This penultimate episode may have been a letdown, but that sure as hell won't stop us, and millions of others, from tuning into the finale.