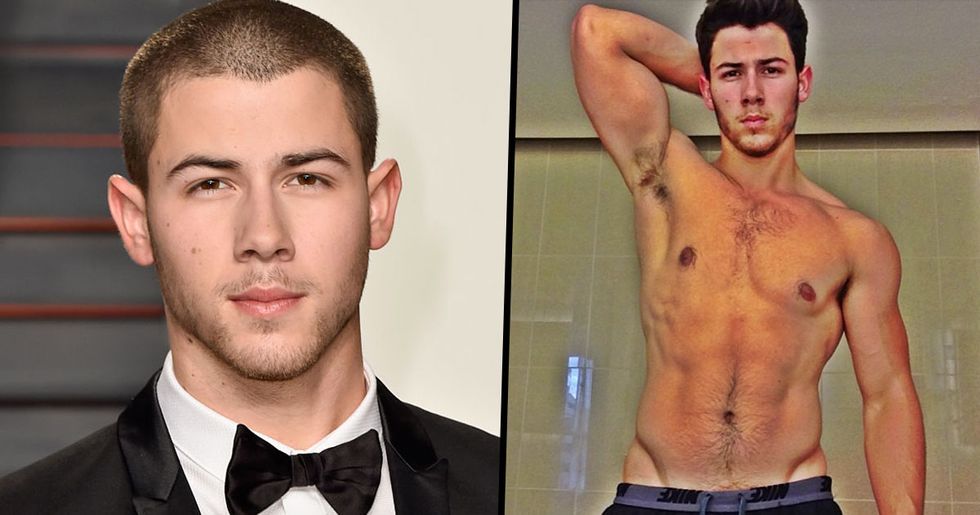 Nick Jonas, who has been in the public eye since he was a wide-eyed thirteen-year-old, has the potential to hit all of the major milestones of a male celeb.

He's been the teen bedroom poster boy, he's been on the cover of GQ, and now? Well, now, Nick Jonas has reached new heights. That's right people, Nick Jonas, showing off his dad bod this week, has entered DILF territory.

Never forget where you came from...

Young Nick Jonas sure did like to pull off a neck scarf. Now, I don't know about you. but in this TBT of Nick posing with a Madame Tussauds waxwork of himself, it's hard to figure out which one is the real Nick... his teenage skin sure was as smooth as a porcelain doll's.

Nick has always been in good shape.

I guess it's important to do a little weight lifting and.. rope pulling(?) if you're to garner the hearts of teen girls everywhere.

He was an expert at stripping for the camera.

Rain? Check. Puppy dog eyes? No problem. Slowly removing tee with tensed muscles? You got it.

Nick sure likes to strip.

Taking off his shirt wasn't a privilege that Nick exclusively withheld for photoshoots, he would happily tease audiences with his rippling muscles at concerts, too.

There's nothing that says "I'm not a kid anymore" quite like...

Showing off your impressive "man" muscles while leaning against a builder's yard fence thing.

Nick was the youngest in the Jo Bro trio.

The sibling boyband also has an even younger brother, Frankie, but he's not part of the band. In the band, Nick was always the baby.

Watch out for Frankie Jonas...

Now eighteen, the youngest of the Jonas brood, Frankie, who is also a musician, may definitely be making teen hearts flutter. He could safely be in the teen-bedroom-wall-tier.

Nick Jonas sure worked hard on getting ripped.

Big muscles like that sure don't appear overnight. Nick put in long hours at the gym to keep his muscles... muscley. That boy sure has a protein shake or two.

If I stripped off as much as Nick Jonas does, I'd sure try to do a pull up every now and again, too.

While still a bit of a heartthrob, younger Nick certainly had more scrawny, sort of dorky, boy-next-door vibes.

Then, as if overnight...

Wonder who his personal trainer is...

Frankly, Nick Jonas is proof that you really can get the body that you dream of with a little training.

Kingdom, which aired 2014-17, featured a rather beefy Nick Jonas playing Nate Kulina, a gay boxer. I guess he must have had to stay pretty ripped for that role.

Did Nick let himself go after Kingdom ended?

Surely, it's fair enough that Nick may have cut back on the weight lifting, gym-going, and protein shake drinking after the boxing role was done with, right?

When you fall in love, science says that you put on weight...

It happens to everyone. I'd go as far as to say that it's biological. When we're happy, in love, and in that honeymoon phase with someone, you won't find us counting calories or saying no to days spent in bed feeding each other pizza. It's only natural, right?

Nick and Priyanka got together mid-2017.

The couple have been loved up ever since and tied the knot December 1st, 2018.

Priyanka has kept in great shape.

Despite the inevitable indulgences that come with being in a comfortable relationship, Priyanka has maintained her great figure since marrying Nick.

They might not have kids yet, but Nick is rocking the dad bod...

Who in their right mind would be in the gym, when they could be chilling on the couch with Priyanka Chopra?

People on Twitter are swooning over Nick's new look...

It would seem like the world is so ready for Nick Jonas' dad bod stage...

For some, Nick's new bod is definitely a level up. I guess now we'll have to wait for him to transition into the silver fox stage... he's got a while yet, but we're certainly looking forward to it.