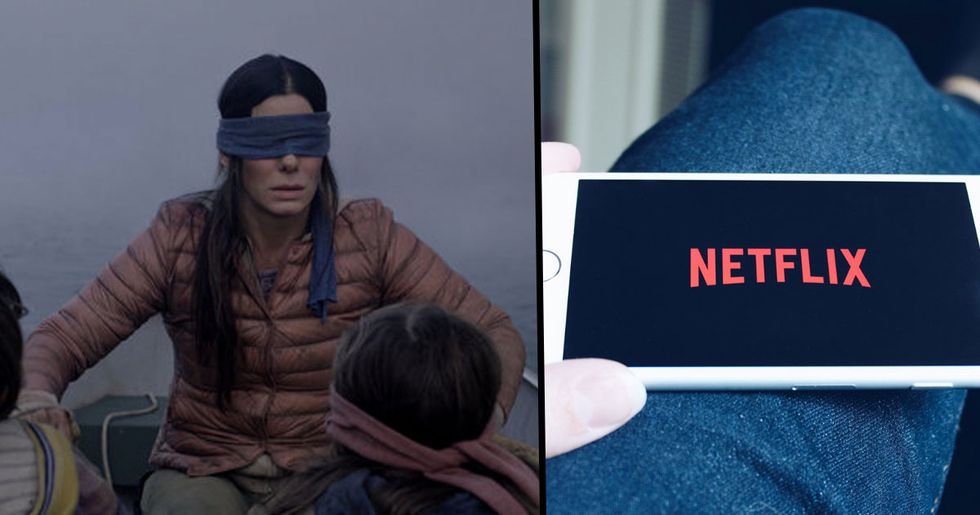 Once upon a time, there lived a greedy giant called Netflix.

Seriously, though, is 137 million paying users worldwide not enough? That's at least 1.1 billion dollars a month, 13.2 billion a year.

Since the news broke out on Thursday morning, thousands of people have gone online to express their outrage. What about users who share their password with others because they have no time to watch TV but have already paid for the month? What about college students who have barely enough money to buy food?

Eight dollars might not seem like a lot to people with full-time jobs. But it is so to students already paying their tuition fees with no jobs. Not only is Netflix promising to track down users who share their passwords, but it also wants to involve the police. That's right. Instead of going after school shooters and politicians who hide their taxes, police will have to go after TV watchers. And there are millions of them.

Behind this is British firm Synamedia, which uses artificial intelligence to find shared passwords on streaming services.

According to Fox News, it was created last year out of "Permira Funds’ acquisition of Cisco’s Service Provider Video Software Solutions business." Streaming services will have to pay to access Synamedia.

The new technology was first presented at the Consumer Electronics Show (CES) 2019 conference in Las Vegas.

Fox News has quoted the company, saying that the new technology "combats the rapid rise in account sharing between friends and families, turning it instead into a new revenue-generating opportunity for operators." In other words, this is all about making more money for the operators and no benefits to users, only costs. That's literally what they said.

"The technology can also be used to detect and shut down large-scale, for-profit credentials sharing accounts run by fraudsters."

This is someone who "has illegally sold their password online to multiple people." So most likely not you.

Once the offenders are identified, it will be up to each streaming service how to deal with them.

"For instance by sending them an email asking them to upgrade to a premium service or even shutting down their account," The Sun reports.

In their testimony at the conference, Synamedia based their assumptions on statistics provided by Magid media research firm. Magid said that, at the moment, "26 percent of millennials share passwords for video streaming services."

"Our new solution gives operators the ability to take action. Many casual users will be happy to pay an additional fee for a premium, shared service." I really couldn't name one...

He also said that the software is "a great way to keep honest people honest while benefiting from an incremental revenue stream."

What does that even mean? Synamedia further predicted that "by 2021, credentials sharing will account for $9.9 billion of losses in pay-TV revenues," Evening Standard says.

Is it actually losses? Or is it just money they won’t earn, because of shared accounts, on top of what they usually make?

Synapedia's AI software analyses where users are logged in and then flags accounts that use shared passwords.

"It uses behavioural analytics and machine learning to track how many people are logged into a single account, as well as where they log in from," The Sun reports.

According to Evening Standard, it will also identify "what time it is used, what content is being watched and by what device."

One user noted in the comments that this sounds like a serious privacy violation. Ken Moline said, "This software is a infringement of personal privacy laws. No company has the right to tell me how to use my purchased product. And what if these people share payments by using their gift cards available for purchase so no credit card is used?"

This information is then passed "onto the provider through a probability score that the software has found an infringer."

The Sun says, "if an account is signed in and watching shows in both Edinburgh and London, then Synamedia flags the user."

"A typical pattern would be you have a subscriber that is simultaneously watching content on the East Coast and West Coast of the US," Jean-Marc Racine said, as reported by Evening Standard. "That’s unlikely to be the same person."

The software can, supposedly, tell if you're watching from your house or if you're on holiday.

How? Is it going to track everything else you do on your computer? Or your every move? That’s textbook infringement of privacy rights.

"It can also distinguish users who are sharing passwords with friends or kids who no longer live at home."

In other words, it will make maintaining close relationships between family members and friends separated by distance even harder.

Evening Standard says, "If the sharing pattern is extreme, for example the credentials have been sold online to multiple users, they can shut down accounts."

Synamedia is already trying out their AI system. However, its official release date is unknown.

People, and especially loyal Netflix users, are pissed off by the news.

Hue Jaynus: "I pay for the service and, having bought the service, its up to me whether I choose to share the password with the kids - Netflix don't like it, then I will go elsewhere."

Shell Keeyyo: "Police need to control and STOP this knife crime, rather than chasing honest people who pay for a subscription and chose to share this with family and friends....#fools."

Elaine Kettle: "WHAT!!!! how many murders since New Year and the police are going to be involved in this. Utter nonsense."

Chelle Louise Acott: "My partner, myself and my children use Netflix, and if u think I'm paying for 6 accounts u can jog on! My password, I'll do what I like with it."

Cayrun Maharjan: "I think Netflix wants to loose its customers."

Dawn Teasdale: "Weird as don't Netflix themselves say it can be shared with friends?? I'm sure I've seen them say that via advertising."

Donna Halton: "Get a grip, load of shit. I’ll go on sharing mine and if a stop is put to it, then there’s a stop to my subscription. That simple."

Darren Francey: "If they try to track and log your information they are in breach of the data protection act and also they don't know all appliances you own so if you log in from different media they would have to invade your privacy to say it is or isn't you which, yet again, is a breach of the privacy act."

Lisa Remnant Donovan: "My account my money and if I want to go to my mates house and use my own account. Good luck proving I wasn’t there."

Kenny Smithy Pickering: "Will track your Netflix but not your stolen cars. What a joke."

Joanna Bendikas: "I guess least if we're all sent to prison for sharing our Netflix passwords, we will get free rent and board, not to mention 'pocket money.' Oh and if we choose to we could even study... we can save our money up so when we r released we can use that money to resubscribe to Netflix..."

Jordan Burns: "I thought you was allowed to share your passwords that’s why they made the 'who’s watching' when you sign in."

Carl Hayhoe: "What next? No one's allowed to look at the screen in your house in case Netflix wants to charge you for viewing it?"

Mande Lawrence: "The police should have better things to worry about. Plus, they don’t have enough man power to do the job they’re meant to be doing as it is. I’m sure the police will be thankful for the extra work load, not."

Another user said, "Companies are getting to big for their boots and want more money to fund their luxury lifestyle. My partner has Netflix. Well, technically, we both do as it comes out the joint account. He’s given me the password. As it’s on the app on the TV we have and as it's a joint account bill, it's my right to have it. So, basically, what your saying is, when he’s away working, I can’t watch Netflix if he’s watching it. Tuff!!"

Tim Stone: "If someone is selling their password on line for profit, then I can understand it, but if someone is just sharing with family and a few friends, then what is the problem? Just sounds like yet another company that thinks it is an authority over others and getting greedy, people pay for Netflix, Netflix is not doing people a favor."

GarySingh601: "I don't see how if I am paying for a multiple profile account they can try and control any aspect of whom I share it with family or friend... I PAY for the use of those multiple profiles... Their control legally should end there... I could see it if I was jailbreaking it and making 100's of profiles..."

The user continued, "They even tell you to erase profiles and make new ones to reset your 'suggested movies' categories that effectively resets your history so you can reach MORE content.. Its THEM that are at fault, not typical user.. They keep playing around trying to find ways to have you pay even more after being responsible customers.. I'll just stream the stuff free through other platforms.. You're doing this to yourself Netflix.."

Countrygirl1362: "When I was thinking of sharing an account with someone I called Netflix and asked if that was okay to do. I was told it was fine, that she shared her account with her mother in another state."

Kayzzz: "Netflix is only trying to get more revenues, knowing once Disney pulls out of Netflix for their own streaming, they'll lose many subscriptions."

GarySingh601: "In short.. Netflix is about to casually take one feature from you.. repackage it.. and resell it to you as a 'added feature'... with a slightly new monthly cost..."

He continued, "It's pretty clear what they are up to.. They no longer want to live up on they're end to letting you have those 4 profiles without charging even more for them... and you're right on the money about Disney.. Netflix plans on producing 90 new films/shows this year..and they certainly don't want to be the ones feeling the brunt of the cost.."

In the end, I think, it’s basic supply and demand. Only it’s demand and supply. If Netflix really forces someone with 6 people in the family to pay for each person separately, like in Chelle’s case, people will just walk away.

Either way, it seems unlikely that Netflix will actually bother with you if you share your password with only a couple of friends. They’re much more likely to go after large scale fraudsters who steal passwords and sell them to hundreds of people.