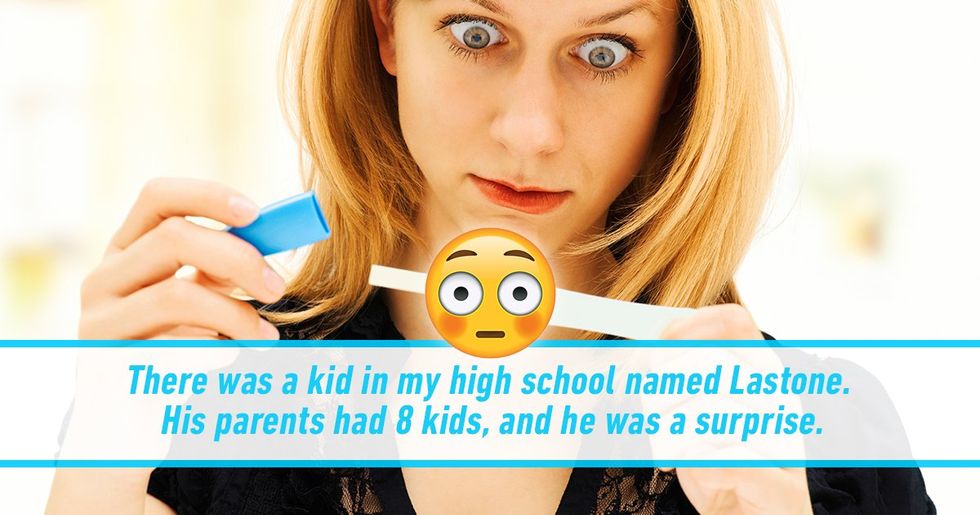 First of all, we aren't here to judge. Everyone is allowed to name their baby whatever they want, as long as it isn't something offensive. And hey, sometimes in the high of an epidural naming your baby something like Sarah or Benjamin just doesn't seem snazzy enough.

That being said, sometimes you meet a child with a name that makes you wonder what exactly the parents were thinking when they picked it out. Here are some of the strangest baby names people have ever encountered.

"My coworker named her baby "Strawberry Rain." Which would be a great baby name, if she had given birth to a bottle of shampoo." -captainmagictrousers

Adding letters to common names is definitely a trend, but this may not be the best way to do it.

"Met a girl named Jennifert in college. Jennifer with a T. Why? Because her parents wanted her to be different." -NippleBuddy

"Taqueria, and for those who don't speak Spanish. A "Taqueria" is a place that sells tacos." -marcusmf To be fair, people name their babies after beautiful flowers all the time, why not a beautiful food establishment?

This was either a mistake or this couple just really loves whiskey.

This kind of has a ring to it.

"Keithen. Keith is one thing before combining it with Ethan. We figured it was one of those situations where the parents couldn't agree on a name, so they just smushed them together. Keithen." -BurberryCustardbath There are many, many more strange baby names! Keep reading!

"Had relatives that couldn't decide between Mike or Ross. So his name is pronounced Mike-or-ross. I don't know how to spell it though." -Stitch82

This works well if your other kid is named "Thefastandthe."

Was her dad Garfield?

"A girl in my class was called "Sonja" pronounced like Sonya. I didn't think it was that bad of a name until I saw her full name was "Lasonja." Her parents named her freaking lasagne." -Merio1220

Heroes walk among us.

"I tried to give my son the middle name "Danger." Turns out if your wife is pissed off enough they will give you a new birth certificate to start over." -maninblack458

"I actually know a guy who is about 20-21 now who has the very legally given to him by his parent's name of Twizzler. His brother's name is very much skittles, and they very much have a dog named Snickers." -gnards Oh, there are definitely more weird names on the next page.

One cool thing about naming a kid is apparently you can do literally whatever you want.

"Jageorgeson...Pronounced Jason. The entire George is silent. The parent actually got upset because it was mispronounced." -uglypelican

This kid was probably lying. Hopefully.

"Satan. Literally named Satan. We didn't believe it so grilled him about it and he either an excellent liar or his parents named him Satan." -Avinan

At least they tried.

"My mother works at an elementary school and has met at least three different girls called Iamunique pronounced like the sentence "I am unique." The irony justs adds to the pain." -miss_kneedles

Ok, hear me out: this is a cool name.

Why do so many people name their kids after snack foods?!

"My uncle's middle name is Soda-pop." -El_Grosso To be honest, that sounds like exactly the kind of thing an uncle would lie about to their nieces and nephews. Keep reading for more strange names!

It is kind of a pretty word.

"Areola. Her mother didn't know it was an actual word, she just thought is sounded pretty." -ShaolinDave

This is some hipster nonsense but I sort of like it.

"Guy I met at a buddy's house said he named his daughter Rabbit... sigh." -schexy01

I have a lot of questions about these names.

"Pleeko, Polo, and Velour. They were all friends, and it seemed like something out of a kid's story." -Sky_Thief

If you want your kid to have a bubbly personality, name them this.

"I'm teaching in an elementary classroom and had a boy named Jacuzzi. That was a fun one." -Pm_me_fluffy_stuff Are you ready for more? Keep reading.

Maybe do a quick Google search before you settle on a name.

"I met someone who was named Nephritis, as in kidney infection. Granted she was an adult when I met her, but I can assume she was once a baby." -Now deleted Reddit user.

"Mom was a teacher, one day she came home and said she had two students, Superbowl Giants and his brother, Stomin Norman. For. Real." -lervein

Well, I guess we know what that family does on weekends.

"I know of a family of 3 boys named Hunter, Fisher, and Trapper." -racheltt

When your baby name sounds unfortunately like a political controversy.

"Brexylnn. Coworker though it was cute, but the only thing I can think of is Brexit." -mbarker42

This is a self-fulfilling prophecy waiting to happen.

"Twins, named Rowdy and Ruckus." -tbast The names only get more odd on the next page.

Good luck to all her teachers trying to pronounce that on the first day of school.

"I know a little girl name Leighnkon. (Pronounced Lincoln) If you are worried people will mistake your little girl for a boy, don't butcher the spelling, just ditch the name!" -capriciousette

It's better than AT&T.

"Pennis. Pronounced like Dennis but with a P. Why would anyone do this to their child?" -GodofWitsandWine

If your last name is Jones and you don't do this, honestly, it's a missed opportunity.

"Interning in the counseling department at a high school. It's early Monday morning, and I'm chugging coffee to perk up. They finish up mornings announcements and read off a list of students needing to go to the office for various reasons. The last name read was "Indiana Jones." I immediately check the school student roster and there he is, Jones, Indiana. The kid was actually fairly well adjusted and well liked." -TheMadTherapist

This girl has clever friends.

"I know this girl named Feline; most people just call her Kat." -joniejoon

Hopefully there weren't any more surprises because Actuallythelastone isn't a great name.

"There was a kid in my high school named Lastone. His parents had like 8 kids, and he was a surprise." -fingawkward

When you find a name you like, stick to it.

"I've got a buddy named Paul, whose older sister is named Paulina and younger sister is Paulette. His parents liked the name. He might even see this, so hey Paul!" -Good_Guy_James

When you want a baby name but also you just love random words.

"He was called Temperature, no kidding." -Kronyon

Coming this fall: Jacolm in the Middle.

"I knew a little boy called Jacolm. Malcolm is a bad enough name for a child but Jalcolm!" -purplekay

"When I was out shopping I heard a woman shouting 'bluebell primrose'" -irisT_ You haven't even read the wackiest name yet, keep reading!

I don't know why this one made me laugh so much.

"One of my best friends in elementary school was named Kactiss. Pronounced just like cactus." -erikasabin

This sounds like someone just looked around a room and named their kid whatever the first thing they saw was.

"I knew a family with 4 sisters. Their names were Faith, Hope, Charity and...Laura. Laura was the youngest. She was unexpected." -lunaburning

This is a cute story, but not a great name.

"I have a cousin who, after several years of trying, conceived her 3rd child last year. She and her husband named the baby (girl) Puzzle. They keep telling people that they chose to name her Puzzle because 'she was the last missing piece.'" -Chey21890

If you have a lot of kids, eventually you run out of names.

"My grandma had 10 brothers. I guess her parents started running out of names because 2 of them were named Sam. They were called Big Sam & Little Sam." -Brotox123 You aren't done yet, there are more names on the next page!

Well, that is embarrassing.

Her parents just loved the store.

"I used to teach a little girl named Staples." -Ashleysmashley42

Well, I guess we know what this kid will be when he grows up.

Technology has truly taken over our lives.

"Tablet. I was in an airport and thought they were talking to him about his Kindle or iPad. Nope. It was his name." -onlyzuul

And the gold medal goes to...

"I'm gonna go with the poor girl who made the news for suing her parents to change her name. Her name was Talula Does The Hula From Hawaii. That was her first name. The whole thing." -RhynoD