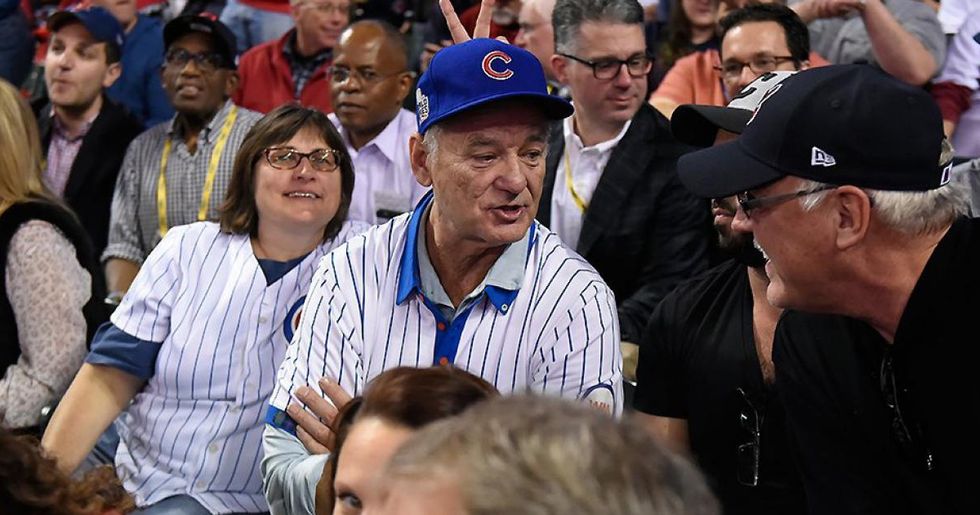 Probably my best celebrity encounter was the time I met Paul Rudd. I was in college, and we went to a free screening of I Love You, Man in Boston. After the movie, Jason Segel, the movie's director John Hamburg, and Paul Rudd would be there to sign autographs and take photos. Now, you have to understand. I was in love with Paul Rudd. He was definitely my #1 celebrity crush at the time, and he probably still holds that place today.

The man is adorable. And you know what? He's even more adorable in person. He was wearing the softest sweater ever, was so gracious about taking a picture, and even acted shocked and appreciative when I stammered that I loved all his movies but especially his performance in The Chateau, which was a teeny-tiny indie movie I was sure he'd be impressed I'd seen. And he was! Or at least he pretended to be, and I was so grateful.

Sometimes, celebrity encounters do indeed live up to your expectations.

Podcast host Doug Tilley asked that people share stories of the times they met their heroes and their heroes lived up to all their expectations. The answers will not disappoint.

I mean, we all know how amazing Carrie Fisher was, so a quirky, hilarious encounter like this isn't all that surprising, but it's extremely heartwarming.

@Doug_Tilley I was once in a disastrous late-night rewrite where the big star of the project was pissed at everyone… https://t.co/pGxlpI5Vtw
— Tim Carvell (@Tim Carvell)1548134230.0

Well, it sounds like Sarah Silverman isn't just a top-notch comedian but also a top-notch human being. Love it.

@Doug_Tilley When I was in film school, Guillermo Del Toro patted me on the shoulder, called me “my boy” and explai… https://t.co/9ynwx6KN8k
— Daniel Kibblesmith (@Daniel Kibblesmith)1548134013.0

Well, this is incredible. You literally could not make up a celebrity story better than this one. And this one's real.

@Doug_Tilley @pattonoswalt at a book signing w/my daughters. Youngest was painfully shy, but brought along her DVD… https://t.co/5iwimfWBNp
— sublimelight312 (@sublimelight312)1548127471.0

This is so cute. You can tell a lot about a person by the way they treat little kids. Patton Oswalt is one of the good ones.

I mean, I guess whatever floats your boat! If you want to get strangled by Bryan Cranston, I'm glad he did that.

@Doug_Tilley When I was six years old, my asthma prevented me from seeing the Ghostbusters stage show at Universal.… https://t.co/F6uW0u67li
— Gordon Jackson (@Gordon Jackson)1548120488.0

There's nothing like learning a big, badass Ghostbuster also has asthma. I want to know what they said about ghosts!

I love this! Robert Pattinson comes off as a little quiet and brooding, but I guess that's just his character in Twilight.

Um, can I make this my phone background? It's awesome! Patrick Stewart's Instagram stories about his pit bulls are the best. He's a keeper.

This is literally the best response ever. Dolly Parton is a comedic genius, in addition to being an amazing singer and actress.

@Doug_Tilley Went to Anthony Bourdain book signing + dinner. He hadn’t eaten, so I asked if he wanted to share my p… https://t.co/plZdOsSlLW
— Marie Bouvier (@Marie Bouvier)1548146968.0

Man, he really was a celebrity that treated people like people. This is an awesome story. He will be sorely missed.

Imagine talking to Tom Hanks...at any point in his career, really...about anything! I bet that would be a top 10 memory, for sure.

An email from Gandalf the Gray himself?! Shut up! This is amazing. What a mensch.

@Doug_Tilley Days after interviewing Pierce Brosnan, he recognized our camera crew and stopped at the airport to ma… https://t.co/b66Qnyolou
— Rachel West (@Rachel West)1548100658.0

007 really does seem like one of the good ones. He's like, super in love with his wife too, which is how you know that he's the best.

I can imagine this was probably life-changing. How did he meet Mr. Rogers as a freshman in college? I feel like that would have had a profound impact on my life.

This is my personal favorite because Carole King is the best, Tapestry is one of my favorite albums ever in the world, and it's so nice to hear she's an actual hero.

I love this, mostly because I like the idea that John Goodman is partying his face off at Mardi Gras every year. He deserves it.

the first time i met @taylorswift13 she called me beautiful and i am acutely aware that my life peaked in that mome… https://t.co/CjYnOw3Vhf
— Will Ganss (@Will Ganss)1548119028.0

If Taylor Swift calls you beautiful, you know that it is true. I honestly don't know how anyone could recover from this moment.

Alan Rickman just seemed like the nicest, coolest dude, and lo and behold, it turns out he was. Thank goodness for that.

No biggie, just a filmmaker chatting away with probably the greatest movie critic of our time! I don't know how he kept his cool.

Wow, what a gracious and perfect response. It takes a special kind of person to recognize exactly the kind of impact they've had and to continue to appreciate it that many years later.

@Doug_Tilley Conan O'Brien treated me like I was a friend when I interviewed him on a red carpet years ago, laughed… https://t.co/jSVVLMVAA9
— Tanner Thomason (@Tanner Thomason)1548140162.0

You always want to see famous comedians enjoy their profession and be the person they are on screen. This is so great.

Maya Angelou walked in while I was on a shift. I sent a friend to the bookstore as I kept serving her plenty of bee… https://t.co/f5oAWYCNsP
— Mona Holmes (@Mona Holmes)1548176361.0

Um, what. This is a legendary story. What do you even do with yourself after a night like this?

Got to love a celebrity who can hang with the grandmas and make them laugh. That's a special skill.

@Doug_Tilley When I interviewed @HamillHimself, he was charming, funny and full of wisdom. I even got a photo featu… https://t.co/40vNYIZObH
— Philly Byrne (@Philly Byrne)1548137514.0

Mark Hamill seems like such a genuine guy who's always having the most fun he could possibly have. Glad to hear that's really the case.

I mean, Stephanopoulos has to be one of the busiest men on the planet. Taking this kind of time is something he didn't have to do.

Confession: I also met Paul Feig one year when I attended the Austin Film Festival, and he was so nice and friendly and talked to us like real people even though we were dumb, wide-eyed college students.

@Doug_Tilley A friend of mine saw his hero walking down the street and in his awe stammered "You're Bruce Campbell!… https://t.co/baAmPs2ELz
— Cynical Optimist (@Cynical Optimist)1548175754.0

This is legendary. Out of this world. Literally the most perfect celebrity encounter I could conceive of.

This is pretty well known, but it's worth mentioning because he's literally the best. Once he tweeted back at me because I told him we went to the same college. He's that kind of guy.

Gosh, David Sedaris is just one of my favorite people. Share this with someone who might have a fun celebrity story of their own!