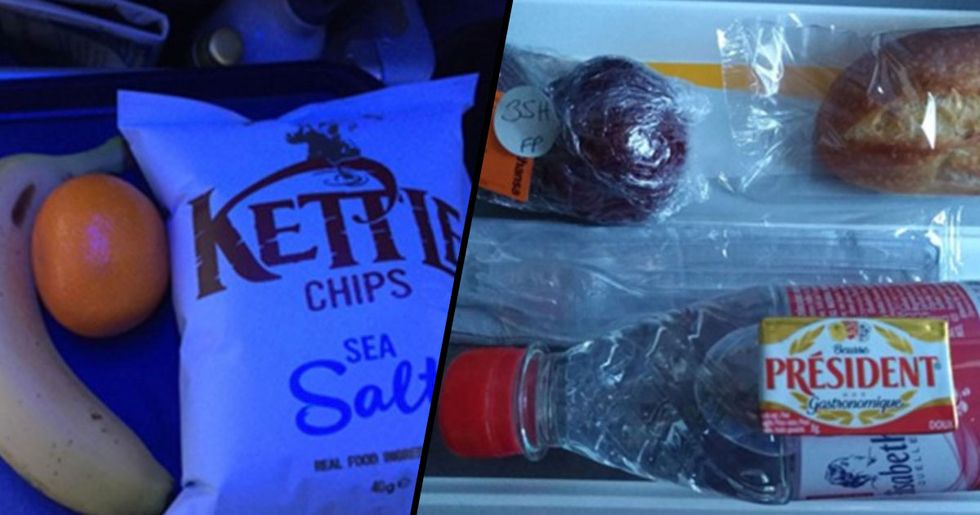 People Share the Disappointing Vegan Meals They Were Served on Flights

Life for vegans is rarely easy. Along with the constant berating they receive online, it can be super difficult to actually find things to eat. As the vegan lifestyle becomes more and more accepted, grocery stores are finally (and slowly) catching up, offering better plant-based alternatives than ever before. But one area in which it seems that there are still some serious leaps and bounds to be made? In-flight catering.

Fly Ve is an organization hoping to change that. The website allows vegans to share their experiences eating onboard various flights - and some of the results are pretty horrifying. Here are some of the best (or should we say "worst") reviews.

"They provided a vegetarian option on request for my partner but no vegan for me. Also it was a very unhealthy pastry. Not a big issue when we were only on a 1 hour flight - perhaps their provision is different for a longer flight."

"Disappointed by my 'vegan' breakfast that wasn’t actually vegan (honey oat bar). Also, would love Norwegian to realise vegans can eat more than just fruit! There are plenty of vegan options these days and I was disappointed by their reliance on fruit to cater for vegan meals."

"My daughter flew Manchester-San Francisco on 28.5.19 - an 11hour flight. She had pre-booked her vegan meal and confirmed it in a telephone conversation with the airline. The air steward argued with her that no meal had been booked, until she produced a confirmation email to him. An hour after every one else had been served, the steward produced an apple for her. At that point she hadn’t eaten since breakfast at 7am, the flight left Manchester at 11:55am. You shouldn’t have to expect to take precautionary extra food on a flight with you when you have pre-ordered food. Non vegan passengers wouldn’t be expected to do this. She didn’t have room in her hand luggage as space was limited due to her travelling to work in the USA for 3 months. By the time she got off the plane and through customs she hadn’t eaten in almost 20hours."

"The vegan food was absolutely tasteless and I do not know how it held together because it had no texture at all. So on my way back I decided to have a fruit meal instead and this was even worse! It consisted of two unripe plums, bun, butter and bottle of water! Since when are bun and butter considered to be fruits? And this was supposed to cover half of the 10-hours flight…"

"Flew round-trip from Philadelphia, PA to Atlanta, GA, then back so flight was not long enough for full-meals to be served. However, snacks were provided but only of the junk-food variety, i.e chips, pretzels, cookies, together with Coke, Sprite, or Iced Tea, none of which are vegan. No vegan options were listed in the menu's provided as well."

"Just a couple of weeks ago I flew with Eurowings again and as always there was nothing vegan offered to eat apart from a bag of crisps. For years this company has been offering cheese sandwiches to vegetarians, failing to understand that cheese is not even vegetarian, because it has been curdled with calf rennet."

"We booked vegan meals at the time of booking but on the flight to be told they weren’t there (in fact they said we weren’t even on the passenger list, despite the fact that we obviously had boarding cards – not terribly confidence inspiring). Attached is a picture of what they came up with, for our evening meal – banana, apple, orange and a packet of crisps."

"I bought a small tub of pringles as I was hungry and that was all that was available that was suitable. AND this small tub cost over twice as much as a large one in the supermarket. No plant based milk available, would have loved a cup of tea!"

"Plain rice, steamed carrots, string beans and some grilled tomatoes. White (stale) bread roll with margarine. Dessert was fruit slices if I remember correctly. Bring your own food. On the plus side at least it didn’t cost anything, but they did charge for all alcohol."

"I was told there was a vegetarian option only. I asked for a coffee with plant milk and the flight attendant said , 'we do have semi-skimmed milk.' I really wanted a hot drink so I asked for hot water, they filled up a cup and asked me for £1.50!! I refused to buy it. I was so disgusted that I had no food, no coffee or tea with plant milk and was charged £1.50 for hot water, I said the airline was offering a very poor service for Vegans. There was no apology at all nor acknowledgment to my comment."

"The meal was a gruel-like yellow rice mush (maybe supposed to be risotto?) mixed with sweetcorn, tomato and some chewy bits of asparagus. The salad was provided with dressing which was nice and the fruit seemed fresh but the bread roll was hard on the inside and stale. I’m sure it wouldn’t be hard to do better than this! Later when we were given breakfast I was only offered a non-vegan muffin with no explanation as to why a vegan option wasn’t provided."

"Can’t fault the crew or the actual flight...just the food. Unfortunately, the only vegan food on the menu was chips. The only hot drink option was black tea or coffee."

"The main lunch provided on my flight was barely edible – undercooked (15 pieces of) pasta, with a smattering of tomato sauce and a couple of limp vegetables. Later when the other passengers got an afternoon tea snack, I was offered the same dry onion-y salad and under-ripe fruit bowl that I had been given alongside my lunch previously."

"No actual meals were available, however the steward did point out a small Graze box of bbq nuts in the menu which were vegan, and the water. Very poor."

"Main meal was plain rice, peppers and onions with a side salad… disappointing. Got served BUTTER twice. Had a poor vegan snack of a cucumber and tomato sandwich, no spread or anything. Breakfast was a banana, bagel, jam and juice, no vegan margarine and no soya milk or milk alternative which was especially disappointing especially with the fact Starbucks are partnered with Delta." For more vegan fails, scroll on for a time when Pizza Hut seriously dropped the ball.