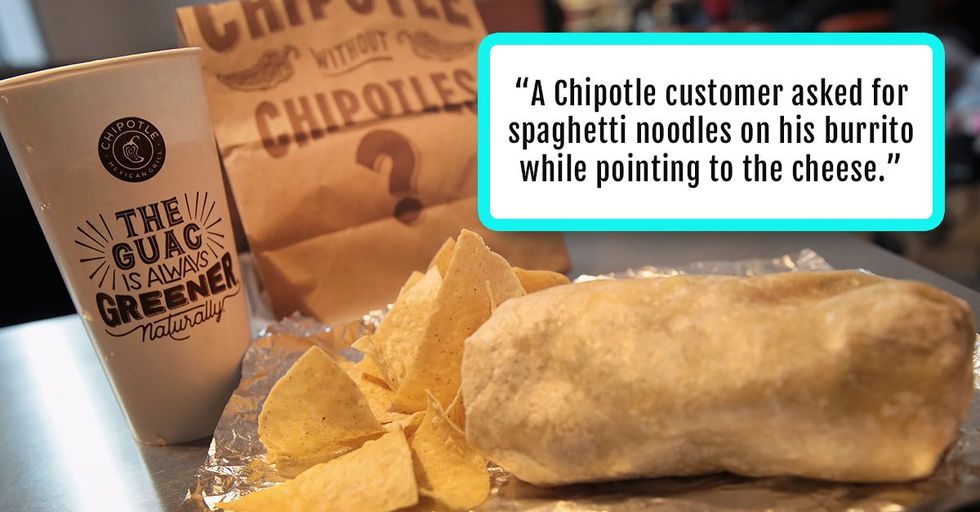 If you've ever worked a retail or food service job, you've undoubtedly heard these words which quickly became the bane of your existence: The Customer Is Always Right.

Well, I'm here to tell you that that is simply not true. In fact, the customer is often wrong.

A recent AskReddit thread gave people the opportunity to share their tales of customers being extra dumb. And, of course, people came out of the woodwork to provide their stories.

Her: Hi. I’d like to order an HP printer. Me: OK. Would you also like to add the printer cable as it’s not included. Her: Why would I need a cable? Me: To connect to your computer. Her: Oh honey, I don’t have a computer I just want to print some stuff. Me: Umm. You need a computer in order to print stuff. Her: No. My son knows a lot about computers and you are wrong. – xorant

Customer: I'm allergic to anchovies, so no anchovies on my Caesar salad. Me: There are anchovies in our Caesar dressing, what would you like instead? Customer: No there's not, I had it last week and I didn't taste them. – WesbroBaptsBarNGril

A pleasant lady walked into the bike store I work at and asked us to help take her daughter's bike out of the car to find out why it wasn't riding as well as it had been when she got it. I stride over to her minivan and lug out a beautiful, spotless blue Bianchi. Looked like it had been ridden maybe twice. Brakes were snappy, shifting was crisp, chain had zero rust and zero stretch. The bike was basically good as new. Except the tires were empty. I asked her when her daughter filled them last. "You have to fill them?" – cr4m62

Worked at a gas station. I watched a customer pull up, whip her door open and slam it against the large, shiny silver pole that protects cars from running into gas pumps. She then proceeds to furiously get out, scream with her head facing the heavens, and run into the gas station telling me I need to be more careful where I place those. The thing has been cemented into the f**king ground for more than 20 years. – Freakawn

"Man, y'all don't know how to treat customers. It's why you all losing money. I'm going to Lowe's." From a customer yelling at customer service. In a Lowe's. – ohitsmark

Customer: $11.50?!? The deal says any two footlong sandwiches for $12! Me: Yes, but one of the sandwiches you got had a regular price of $5.50 so it was cheaper any– Customer: That's ridiculous!! I want to see a manager. Actually forget it. I'm never coming back! – greywolf248

When I worked at a bank I had a customer come into the branch angry because his account was overdrawn. I looked at the account and noticed several checks had gone through so I told the customer who got even madder because how could his account be overdrawn when he still has blank checks in his checkbook? Dude truly believed that checks were like cash. – dusbunnee

A Chipotle customer asked for spaghetti noodles on his burrito while pointing to the cheese. – HimynameisFak

Worked in a scooter repair shop. This customer had lost her keys. She had us pick up the scooter and cut her a new key, then she came in to pick it up. Walks in, pays, goes outside to drive home. Walks back inside. Customer: Um, when I dropped my bike off, there were like..a lot more keys on here... *Holds up key ring* Coworker: You had us pick up you scooter... because you lost. Your. Keys. Customer: *Eyes go wide after several seconds of confusion* Oooohhhhhh thaaatsriiiigghht......!! We all stare at each other as she leaves, wondering how she functions in society. – Ninja_rooster

I made lentil soup for the kitchen I worked in as a teen, but I put the carrots in later than I should have, so they still had a slight crunch when the first customer bought a cup. He stormed back in after a few minutes and demanded his money back because he was going to get food poisoning from eating an uncooked carrot. – RepresentativeBelt

I Had an argument with a customer that there is no such thing as an uppercase "5." So when he was typing in his email password, he was typing a "%" in his password instead of a "5." – devildunkard

When the Nintendo DS was released with the Brain Training games we had several middle-aged and older customers come in to buy the game who didn't own the Nintendo DS. They'd say "No I don't want the Nintendo thing I just want the game." After confirming she didn't own a DS, one lady told me "I used to work in sales, I know you're trying to upsell me and it's not going to work." Most of the time they thought they could put it in their computer somewhere or ask their children for help. – phattoes

The ice dispenser broke at the fast food joint I used to work at. As a temporary fix while we waited for the repair guy to come take a look at it, we set out a giant serving bowl full of ice with tongs, so people could still ice their drinks. About 10 minutes after putting out the ice bowl, a customer comes up to me to complain that the machine isn't dispensing ice. I tell him, "We know. A repair guy was called, but he's not here yet. In the meantime, there's a bowl next to the soda fountain, so you can still get ice." The guy immediately gets an attitude about it. "How do I know that ice hasn't been sitting out there all day?" I stare at him for a good few seconds before saying, "Because it's still solid." – CentSG2

I worked in call centers and you get connected with some very weird people. Me: OK are there any lights on the modem? Customer: No, its unplugged. I unplugged it because I didn't like the lights. Me: Oh... Well the modem needs to be plugged in to work Customer: I don't want to get out of bed, can't you send the signal from your end? Me: ...No, it's physically disconnected, you need to plug it in. I'm just on the phone with you. Customer: I don't get why you're giving me the run-around!