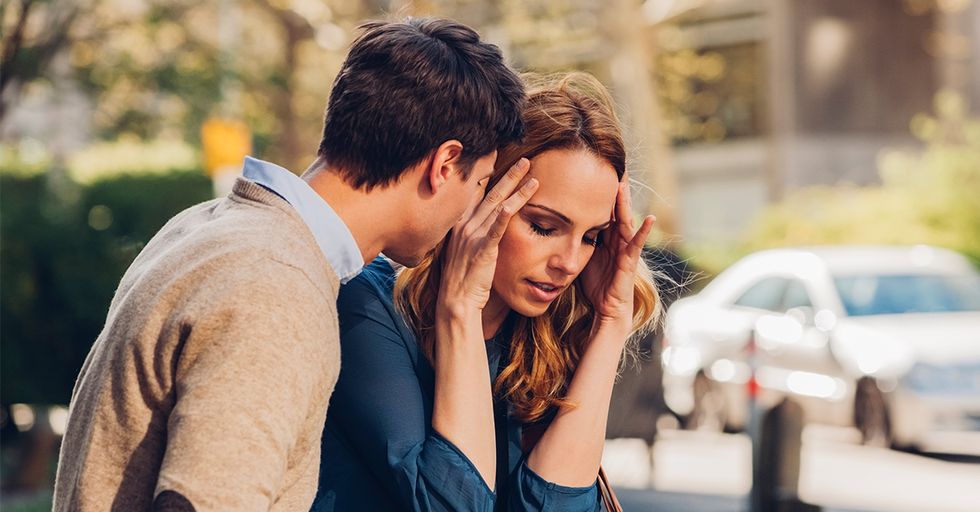 Relationships are always hard, but they can be especially difficult once you realize that the person your dating lacks a certain...intelligence that is usually required to function in this world.

Here are 20 times people realized that the person they had given their heart to was actually a complete idiot. It happens more than you think.

Every time I went to her house, there was small brown/melted "V" shapes in the carpet. I always wondered what they were... Then one day, I went over one time and saw her hair straightener lying on the carpet. She left it on ALL THE F*CKING TIME, and would just go to work. Like.. how have you not burned your apartment complex down yet? –Doebino
We were having dinner when I mentioned I couldn't eat cheese because I'm lactose intolerant. He asked how I could eat eggs. I told him that lactose was found in dairy, which comes from cows. He vehemently rejected my explanation that eggs did not come from cows and were not dairy, and wouldn't believe me until he googled it for himself. –mimepanda
He called in "sick" to work and left a message on their answering machine saying he couldn't come in because he wasn't feeling well. Half an hour later he thought up a "better" excuse and then proceeded to call back and tell the woman that answered that he couldn't come in because his car had broken down. She (perhaps unsurprisingly to the rest of us) responded with "I thought you were sick?" Hearing him try to come up with a story in which he was sick AND also had a broken down car was simply hilarious. –Mrs_Enid_Kapelsen
She thought the movie "The Martian" was not only a true story but that Matt f*cking Damon was actually on Mars. –ymyryld
I dated a girl that did not know the names or values of any coins. She was in her mid 20's. –otters9
She thought Al-Qaeda is a country. She actually expressed interest in visiting it someday. –regalternative
He tried to tell me that an oxymoron was a cleaning solution. –Lyd_Euh
He was surprised/in disbelief that I knew how to make a grilled cheese (we were 25/26 at the time). –morning-bird
I was riding the bus to school with my then-girlfriend in 12th grade, I made some reference about us living on the west coast. She then began to correct me and say we live on the east coast. This argument continued for 15 min on the bus and people looked at her like she was crazy. It wasn't till later she found out we live on the west coast. Btw we lived in a California at the time. –DBJawakened
There are so many, but two of my favorites: 1) He was adamant that 'night owl' meant whore and that I should NEVER again refer to myself as one because that was equivalent with claiming that I was a prostitute. I could not convince him that he misunderstood and that 'lady of the night' was the term he was searching for. 2) He was 100% sure that German was a romance language and argued this point vehemently in spite of the presentation of vast evidence to the contrary. –AfterElysium
My ex-boyfriend saw a very large lady wearing double denim, then turned to me and said "wow, how many cows died for her outfit?!" At first, I laughed then realised he wasn't really joking and after probing, genuinely believed that denim came from cows. It was the beginning of the end really... –braithgwirod
When he thought the romantic moonlight, shining down on the water through a hole in the clouds, was the sun coming up through the ocean. ? –Kevdog1800
Not dating so much as f*cking but... we ended up in a huge argument about whether or not the stars were real. He hit me with lines like "I don't think space is real I think it's a conspiracy." Man was he hot, but so dumb. –Veruca_Saltcid
I was a vegetarian when we were dating. Pretty early on he asked if I ate fish. I said no, I don't eat any animals. To which he replied, "a fish isn't an animal, it's a mammal". I didn't even know what to say, I just walked out of the room. –livercookies
When she expressed how spooky it was going to be when Halloween fell on Friday the 13th. –LetsPlaySpaceRicky
My father found out he married an idiot when my mom casually talked about the moon changing shapes every night. –Cott44
When my girlfriend legitimately thought that Benjamin Franklin invented cheese... –RoyaleWithCheese777
Not me but a friend of mine was dating this girl and one day when they were just hanging out, she turns to him and asks "so were dinosaurs real or were they just made up for the kids?" –Nate_K789
My girlfriend thought Alaska was an island because on maps of the United States it's always sitting in its own boxed off section in the corner (because it is connected to Canada, not the US) and she thought it was like Hawaii. –PimparooDan
He took me out to my favorite restaurant, a chic little upscale cafe, for dinner on Valentine's Day and made fun of the way I pronounced filet. He tried to get the waiter on his side. "Can you believe this? Hahaha! She wants the 'fill-ayyyy!" Then he leans upwards conspiratorially, "she means the fillit, obviously. Hahaha!" Then he wouldn't shut up about it. I was like, "it's French, the -et sound is pronounced 'ay'" but he wasn't having it. Kept going on and on about how stupid I must be until he dropped me off at home. I told him we were done the next day. –sweetrhymepurereason