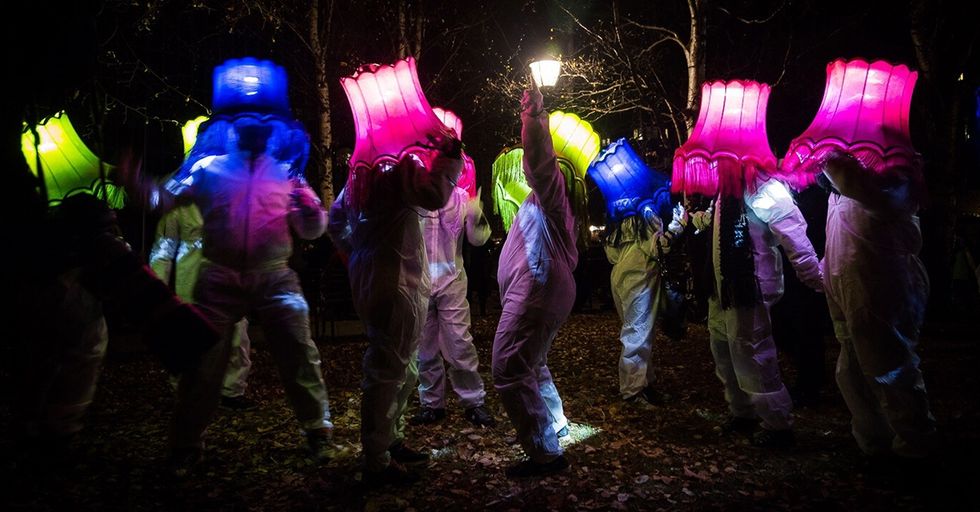 Most people have been to a few parties in their lifetime — usually during high school or college.

Usually, the parties are pretty standard: Red solo cups, copious amounts of alcohol, and a huge line for the bathroom.

But every once in a while, something special happens.

It could be something good or something pretty terrible. Regardless, you're guaranteed to remember it for the rest of your life. People shared their own stories of the most ridiculous thing they've ever seen at a party in a recent AskReddit thread. Their stories are...well, you'll just have to read them for yourself.

A friend of mine did a Scooby-Doo-themed party where he DM’d people the costumes that they should wear. I got Shaggy. Simple enough, just a green shirt and brown pants. I walk in the door to the party and am welcomed by the sight of 40 people, all dressed as Shaggy. It was glorious. –Nonstopbaseball826

Some jackass did 14 jello shots in the span of an hour thinking they weren't all that strong. Then that jackass decided to puke in the kitchen sink and all over the front porch. The vomit was this nasty, congealed mix of vodka, jello, and beer. He left the party and walked home with only one shoe, no phone, and missing his driver's license. That jackass was me. –FitzyTitzy2

I've seen someone uninstall the sink of a bathroom at a house party back in high school. They brought their own tools and took the time doing so. –STEALSOMEBREAD

A drunk guy in a gorilla costume sitting on a couch outside sees a drunk guy in a banana costume on rollerblades. They both immediately stop and turn towards each other, and without a single word spoken, charge full speed at each other and begin wrestling. About a minute later, both get up, winded, and the banana guy rolls off into the sunset, never to be seen again. –kmoneyrecords This next story is a cautionary tale to all guitar players.

Shortly after arriving at a party, the "guy with the acoustic guitar" shows up. 15 minutes later someone took the guitar and smashed him over the head with it, creating a large gash that bled profusely. The attacker then proceeded to run off into the night with the guitar and was never apprehended. It wasn't a good night for the musician. –mc_squared_03

Maybe he was just thirsty?

Big house party many years ago and we notice a guy going through the fridge. As we're watching him from across the room, he grabbed a full bottle of Italian dressing and chugged the whole thing. He walked out like it was completely normal behavior. Drugs are bad. –Cuzimjesus

That could have gone a little better.

Saw a guy in a Chippendales outfit attempt a backflip into a keg stand. Ended up cracking his back on the side of the keg and getting his thong stuck on the tap. All the ice water then started pouring into his exposed crotch. –XDarkSoraX

Someone I know spent 2 hours trying to put a pumpkin in someone's mailbox. He wasn't just pushing it in; he started punching it. Couldn't believe the stamina on that person. Of course, everyone spent the first 25 minutes trying to get him to stop, but after we gave up and just watched it became hilarious. –nocontroll

I was sitting on the roof, and a guy said he wanted to dive through the window to get back into the house so he would look like James Bond. He ran to the window and dove...right into a closed window. Cut his arm pretty bad and said "oh sh*t, I thought it was open. I should stop doing cocaine." –SpectrumOfDeeznuts This next party is one I definitely would have wanted to go to.

This was ridiculous but honestly ridiculously cool. This dude showed up to a big house party of like 125 of us with his service dog. Not just any service dog though. A giant Great Dane with a makeshift army pack thrown over him that carried beers around for people at the party. He brought me a beer or two. What a good dog. Definitely watched my friend feed the dog at least 5 hamburger patties at the end of the night in our drunken haze. –Patriotsandpokemon

Saw a guy snorting coke on a dorm room floor. Someone said something funny, and he laughed, spraying a cloud of coke. He started licking the carpet. –ThroatPredator

Congrats! You have a dog now!

We threw a party that got way out of hand, and too many people showed up. I go into my living room, and a girl is on the couch petting a dog. I ask, "Who's dog is this?" She says, "The people who live here." I reply, "I live here, this isn't our dog." A stray dog had been walking by and noticed a party happening and just walked inside, got on the couch and was pet all night by drunk people. –tonyjefferson

Beer for the unicorn?

We were throwing a house party in college, and some guy showed up in a unicorn onesie (before they were so widely available) and started saying "BEER? BEER FOR THE UNICORN? BEER?" in that sort of hear ye hear ye voice. Hell yeah, we gave that unicorn a beer plus several more throughout the night. Every now and then when our group of friends is out drinking you'll hear someone repeat those hallowed lines. –FlakyParsley

You won a golden ticket!

Went to a tailgate party at a large house my freshman year of college. Not many people were there as it was still early in the day before the game. Out of nowhere comes about 6 frat bros dressed as Oompa Loompas, orange skin, green hair and the whole outfit. Just walked into the backyard, singing their songs and doing as bad a cartwheel as they could. –sloth_sloth666 The next story takes a well-known proverb to the next level.

When life hands you lemons...

A guy who had "life" on his forehead giving out lemons. The lemons had horrible diseases written on them. –Futaba_HeartGold

I have a friend who, on two separate occasions, tried to put out gingers with fire extinguishers. –Eagle110

Saved a trip to the dump!

The host set up a video trivia game with a trunk full of prizes. The prizes were old smelly crap from his basement that belonged in the garbage. –prettydirtmurder

House party for someone's 21st, some guy finds the host's bag of raw potatoes. Another guy dared him to take a bite out of one, but he protested. More people heard of the situation and gathered around him, eventually started the chant "eat the potato." Succumbing to peer pressure, he took a bite and in a brilliant move passed it to the guy who dared him, who then took a bite, and passed it to someone else. It turned into communal raw potato eating with everyone chanting "EAT the WHOLE poTAto" and passing it eventually to everyone at the party. –HauteGarbage Share this with your favorite party animal!