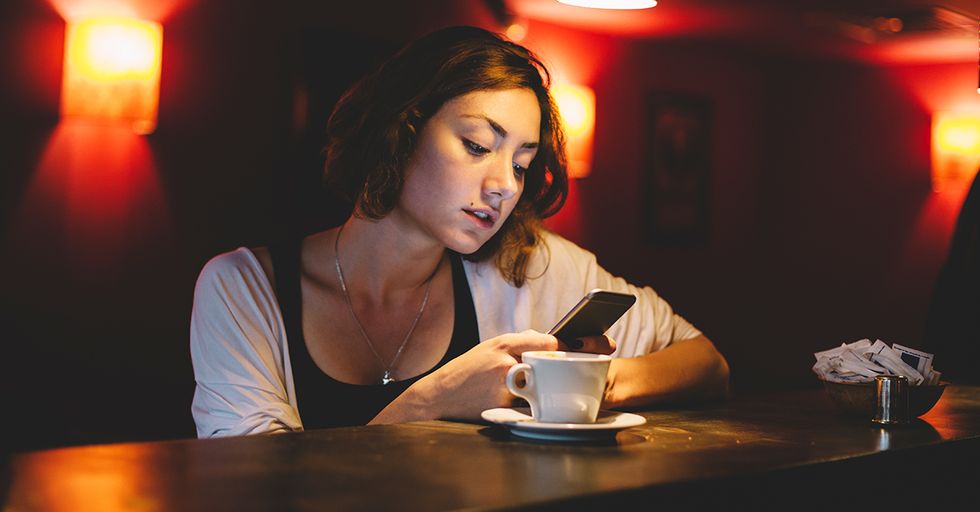 Being single comes with pros and cons.

Pros: You save money, you have plenty of free time, and you can do pretty much whatever you want without having to clear it with anyone else.

For some people, it's the ideal arrangement.

Of course, there are some cons, too. Aside from the occasional bouts of loneliness, people sometimes tend to act a little erratically when there isn't another person around. A recent AskReddit thread asked people to share the "most single" thing they've ever done. Their answers were pretty darn amazing.

Went to a crowded IHOP for breakfast alone and was asked if I minded sharing a table with another single guest. I was hungry, so f**k it. She was 20 years my senior, and we chatted until the food arrived. No more words as we both shoveled the food into our mouths and escaped the situation ASAP. –Minister_Of_Da_D*ck

Accidentally scheduled my annual gynecologist visit for Valentine's Day. I forgot the date 2/14 had any significance. –palindrome4lyfe

I flew to Vegas for my birthday alone. Stayed in a cheap hotel and partied on The Strip spending money on Blackjack, ate at some restaurants, and buffets. Went to some of the funniest clubs out there, and met some fun people. Partied with them at my room. Then the next day I flew back home. One of the best birthday weekends. –guyhabit

I guess if it tastes good...

Heated up plain black beans in a pot, dumped siracha on them, and ate them with the big wooden cooking spoon. –Mf136202 This next one is way too relatable.
As a single person, I love ordering Chinese food because they always guess how many people are eating based on how many fortune cookies they give you with your food. So far, my single ass has gotten four in an order all for myself. No regrets. –anchovie_macncheese

I hope you feel betta soon.

I told my betta fish how my day was for a couple months straight until he died. No roommates and no girlfriend led to a lot of lonely nights. I also cried all night when he died. –Fishing_for_Pandas

My bed has warped into a taco from sleeping in the center for so long. –onishi87

I realized my dog ate better than I did so I started cooking meals for two. We had boiled chicken, rice, and veggies almost every night for a few months. Life was so simple back then. –Scorpionwins23

It's still a good goal.

Ordered a couple large pizzas, both for me, got a couple bags of chips and some soda. Ate all of it in bed over the course of 12 hours while watching Netflix. If I had been with someone else you could call it relationship goals but nope. –RestroomRavager This next story really paints a picture.

At least you had some light in your life.

I sat on the floor of my studio apartment eating leftovers straight from the pot at 5 am completely naked, the light in the fridge being my only light source. –Stugehh

There's only one thing to do with salad.

The lengths we go to to keep the dishes clean.

I didn’t want to dirty a knife to fry an egg so I bit a chunk of butter off the stick and spit it in the pan. –Outlawe

At least your pillow won't steal the covers!

Bought a boyfriend pillow. Oh god. I was so proud, so proud and lonely. –maryeuh

Whenever I order food for me that could feed a family of 18, I answer the door, then turn and shout "Food's here!" to my empty apartment. –FuzzyGreg This next one is a great game to play if you're single next Valentine's Day.

Last Valentine's Day, I played a game called "How much can I eat?" I ate five Hot Pockets, a cup of Instant Ramen, a cup of instant Macaroni and cheese, a personal Totino's pizza and a pint of ice cream. –crk14341

Instead of going to prom I bought a bunch of snack cakes, chips, frozen pizza, and doughnuts. I stayed up all night and played Forza Motorsport 2... I regret nothing. –C0RNDOG

I ordered something large off Amazon. The box was the perfect size for an end table next to my couch. I used it for a couple years until I got married and my wife forced me to buy a real end table. –nalkor54

Is that my voice?!

I was off work for about five days in a row and didn’t do anything but game. When I went to work the first day, I spoke into the mic and 1) my voice cracked from not speaking for five days 2) I startled myself when I spoke. –Taylor555212

This one is my favorite:

When I was studying abroad in Scotland as a 20-year-old, no one wanted to go to the taping of an episode of Antiques Roadshow. I loved the show lol. So I caught the bus from Glasgow to St. Andrews (over two hours) and proceeded to pop up in the background of as many of the interviews/appraisals as possible, wearing my rainbow-colored beanie and trousers, to be more noticeable. I nodded and pretended to be knowledgeable and SHOCKED when they announced the value! The episode is randomly repeated on Aussie television, and I still get bewildered messages from my friends asking if they saw me with a bunch of old people in the background of multiple shots of an Antiques Roadshow episode. For a souvenir of my trip, I added to my tea towel collection with an AR tea towel. –derawin07 Share this with someone who could use a reminder that even though they're single, they're not alone.