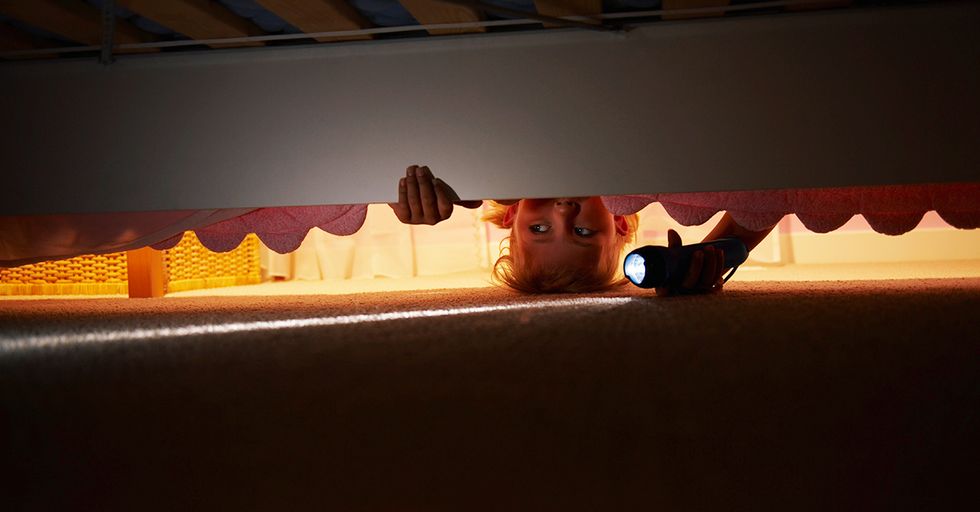 Going to sleep is one of the best things ever. Being woken up by something terrifying? Not so much.

Everything is scarier at night. That's just a fact.

A recent AskReddit thread asked people to share stories of the scariest things they've woken up to in the middle of the night. You might want to read these in broad daylight, just FYI.

Went to bed at midnight. Woke up in searing pain at 2 AM, such grave pain that I thought my appendix had burst. Flipped on the lights to take a Tylenol only to find I had rolled over on a black widow spider that had bitten me. –freeyourtea

Nope! Not a nightmare!

In college, I woke up to my glass closet doors violently shaking in my apartment. I 100 percent thought someone was IN the closet. My roommate was working a night shift on campus and wasn’t there, so I was alone. I basically sat in silent terror for an hour until I got enough courage to get up and go check. Nothing was there, and I convinced myself that I had a weird nightmare. That morning, I got up and was reading the news and saw that there was an earthquake. I realized that is what I heard and it made much more sense. I went to college on the east coast of the US, so it was really strange to have an earthquake. –arcant12

I'm sure there were worse things. But one time when I was a kid, my parents placed a full-body shaped Elmo balloon in my room while I was sleeping. Ever woken up to a floating body? –lightknight7777

My dingus neighbor was drunk and thought my apartment was his. He broke the lock on my door. He then opened up the door to my bedroom and scared the crap out of me at 1 am. I screamed, and he apologized profusely and asked if I wanted to drink Modelo with him and his wife at their house. There had been a baptism, so everyone was partying it up across the way. I went because they're nice, and they had tamales. –IFudgedTheMath This next story is seriously terrifying.

I think I would have buried it.

Daughter had this Minnie Mouse baby doll that crawled on all fours when you touched a button on its back. Wife and I woke up at 2 am to the sound of the dolls creepy laugh. Went out to the living room and the doll was walking straight into the corner. Each time it stopped, it would just start right over again. The button wasn't broken or anything, so I'm not sure what happened. Donated it. –DaaaaamnCJ

What a way to wake up!

I used to live a few minutes away from Buncefield oil storage facility; it was the fifth largest oil depot in the U.K. On the morning of 11th December 2005, it exploded! The explosion threw me out of my bed, and the doors of our house burst open. I looked outside my bedroom window, and the sky was engulfed by a giant fireball! 11-year-old me genuinely thought it was the end of the world. It still baffles me as to how no one died during that incident. –notJeffbutGeoff

Sleeping at home, alone, I woke up one night when I rolled over, and someone else's limp arm flopped across my chest. I freaked out, grabbed the arm, flung it away, and tried to scramble out of bed before realizing that it was my own arm. It had completely lost all feeling up to the shoulder. –95percentconfident

“OPEN UP! POLICE! WE HAVE A SEARCH WARRANT!" It was about 6 am, accompanied by banging that was loud as sh*t. Turns out it was for the apartment beneath my bedroom window but I sat straight up, and my first thought was, “Oh no, they got me!" despite being one of the least shady people alive. –elguapo51

My housemate came home drunk after midnight from a Halloween party dressed as Jason from Friday the 13th. He walked into my room by mistake in his full Voorhees costume and just stood in the middle of the room looking around trying to work out where he was. Woke me up as my door opened and I was frozen terrified for a good 30 seconds. Bought a lock for my door the following week. –newo_ikkin_ This next story is equal parts scary and adorable.

I lived with my oldest sister & her two daughters. Her youngest (3 years old) was a sleepwalker. She was tiny, white-blonde & liked to wear a white nightgown that was too big for her. Yeah, wake up to the sound of thumb-sucking right next to my head, roll over & see the world's shortest ghost. –janefromvegas

We had a rooster who was pretty aggressive, but he watched the rest of the chickens. He was so aggressive though that only certain people could go near him otherwise he'd attack and spur. One night we woke up to what sounded like a young girl screaming at the top of their lungs. We ran outside to see what it was, and old Bach Bach (his name) was walking around decapitated. He'd picked a fight with a raccoon and lost, but that sound he made that night still haunts my dreams sometimes. –WorkRelatedIllness

Of course it was the cats.

The loud sound of breaking glass from downstairs. Husband armed himself and crept downstairs. No intruder. One of the cats knocked over a centerpiece that exploded all over the floor. –flyerflew

I'll be on the couch.

The clear and obvious sounds of an animal in the bedroom. We had no pets. I'm in the U.K. so my sleepy brain at first thought it was a rat, or several rats fighting for their lives. After some minor panicking it turned out to be a pigeon trapped behind the boarded up fireplace. Slept on the sofa that night. –Georgeisthecoolest

Why did you even have that doll?!

My daughter had a Ring Around the Rosie doll when she was little. You put the doll's hands together, and it would sing the song. Anyway, she left it out outside one night apparently, and the dew in the grass shorted it out. I woke up in the middle of the night to this faint Ring Around the Rosie song playing over and over. It was creepy, and we didn't have an outdoor light in the backyard, so I had to go by myself with a flashlight and search the yard for this creepy doll. –stacybobacy This next one starts out scary but has a very happy ending!

I woke up to the sound of scampering raccoon-like creature inside my room zooming about the night before Christmass. It then bounced on my bed jumped off and ran out. I followed it, and it was laying on the couch and barked at me adorably. Apparently, my parents got my sister a puppy, and it had escaped during the night because it was lonely. They had it in an uncovered puppy kennel in the living room, and he climbed out. –Bertensgrad

Thank goodness that wasn't it!

We have a window AC unit basically right above our bed. One night, ice must have gotten built up inside, and it fell onto the fan that blows the air out. I remember hearing a loud bang and then being sprayed in the face by liquid. My first thought was that someone broke in and shot my wife and I got covered in blood. F--king terrifying. –RyFromTheChi

My ceiling fan pulling off my ceiling and hanging a few inches from my face. –24jamespersecond

He probably just wanted you to feed him.

Fell asleep on the couch. Woke up around 3 am to my cat clawing my face. Every time I tried to go back to sleep, he started again. Finally, I got pissed off and decided to put him in another room. As soon as I stood up, I smelled natural gas. The pilot light on my stove had gone out. Little guy saved my life. –Thesecondcomingof

This one's for the birds.

I have an electronic door lock. Late one night, I heard the beeps from the lock over and over and over. 4 beeps every time. I grabbed my phone and checked ring.com. No one there. I went out on my balcony, and the beeping continued. I finally pinpointed it. Effing mockingbird learned my lock tones and scared the crap out of me. –dtspmuggle Share this with someone who loves creepy stories!