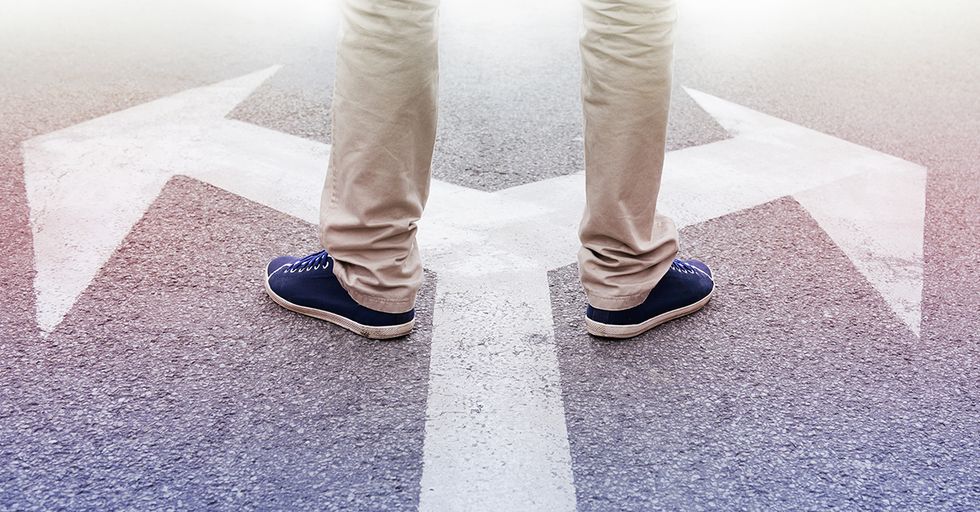 People Share the Decision They Made That They Definitely Don't Regret

Do you know what the best decision you ever made is? You might have to think about it for a while. What was the decision that directly changed your life for the better the most? Do you have one? It is a really hard thing to pick out that singular choice you made that transformed your life for the positive. But that is the question that the people of Twitter recently pondered together.

Nicole Cliffe is an amazing writer who also regularly gets people on Twitter to spill their guts. She asks the best, most nuanced and interesting questions about people because she is curious herself, and we all get to reap the benefits. Cliffe is the master of the human interest side of social media. Recently, the world has been on fire, so Cliffe decided she would ask people for a positive moment from their lives. She wanted to know the single best decision that people have made in their entire lives.

Here's Nicole Cliffe with the question that was heard around the world:

She got nearly 1,000 responses to this. People were eager to share the stories of the things they'd done right in their lives. Can you blame them? Here are some of our favorites.

It honestly takes so much courage to get yourself out of a bad relationship for so many reasons. But it's worth it when you do.

Getting a dog is always a good decision. Always.

Nicole Cliffe responded to this tweet with "raining on my face," and honestly, same. So many tears.

Sometimes, teachers have the power to either make a kid fall in or out of love with a subject. I love that this person spoke up for themselves.

@Nicole_Cliffe Giving dating my closest friend, A Woman, a go even though it was very uncharted territory (obv we are married now)
— Bailey (@Bailey)1538691729.0

Oh, I just got chills. This is so sweet and perfect and oh man, what a good story. Be true to yourselves, people! Allow yourself joy!

What a supremely selfless and generous act. This is true love, people.

Look, one of the very first things I had knocked into my head repeatedly when I first moved across the country was that no matter when and where you move, you aren't trapped. You can change your life. Do what feels right.

@Nicole_Cliffe about an hour ago i put some brownies in the oven, and now i have some still-cooling brownies just waiting to be eaten
— lord whistledown (@lord whistledown)1538691732.0

I mean, this may be a joke answer, but I do not think of it like that. First of all, we all deserve a plate of warm brownies. Second of all, self-care is important.

Sometimes you make decisions that you think you should make or that really do seem right at the time. There is no shame in realizing what you actually want and reversing those decisions. In fact, it's really brave to do that.

I mean, look at that face on that pup. How could you ever say no to that face? (You couldn't! It's impossible.)

This is like something out of a romantic comedy, starring Meg Ryan and Tom Hanks! This is adorable!

This is not a joke. What you sleep on makes a huge difference in your mood and the way you approach life. Get yourself a good mattress.

This is one of the hardest things to do. Bravo to this woman for being brave enough to leave.

I've said it before, and I'll say it again, You have to treat yourself right! Stand up for yourself and allow yourself to enjoy things. Paying for guac is one of the ways you can do that.

To leave a marriage

To admit a mistake of that magnitude is so hard. But it's better in the long run for everyone in the situation. Even if it doesn't feel like it at the time.

You should always trust your gut. Once I left a full-time job for a week-long "trial run" at a company, and that company ended up hiring me for my first full-time gig as a writer.

Hmmm, this is giving me ideas. I know a lot of people say they're going to leave the country when bad things start happening, but this person actually did it.

This is so powerful. To have the ability to forgive gives you all the power, not the opposite. It is a way to take control of yourself and your feelings.

@Nicole_Cliffe Staying with my girlfriend when I graduated high school. We had our 15th wedding anniversary this pa… https://t.co/wmBiXUP832
— Mike Sakasegawa (@Mike Sakasegawa)1538692537.0

Oh, holy cow this is adorable. Sometimes, you just know. And when you know, you gotta do everything in your power to make it so.

These are both very admirable decisions but I would argue that getting a dog is a form of therapy. It is the best thing one can do for oneself.

@Nicole_Cliffe Deciding to keep this weirdo cat that was abandoned on my neighborhood https://t.co/Z6Sw6vfsGu
— Rachel (@Rachel)1538691989.0

I think, judging by this picture, that the cat also thinks you made the right decision. Now you get to look at that face every day!

Sometimes the best decisions are the scariest (or the most expensive). But I would say this one paid off very well in the end.

@Nicole_Cliffe I had two choices for a first job, one was a local ad agency that would have been fine. The other wa… https://t.co/9HnvTIAMFH
— Katie Clifford (@Katie Clifford)1538692471.0

Go with your gut, especially when it comes to professional opportunities. Don't just lean toward stability or more money.

idk the breakfast sandwich I decided to get this morning was pretty killer https://t.co/zbSqbk7RDZ
— Mike Murphy (@Mike Murphy)1538748539.0

Heck yes, a breakfast sandwich is always a good idea! Sort of like the time last week when I melted some smoked gruyere on crusty bread and then plopped an oozing fried egg on top. That was also a good decision.

@Nicole_Cliffe going away to Chicago for college, and never moving back. hands down, number one with a bullet. I wo… https://t.co/dapSZDuHA7
— Rosamund Lannin (@Rosamund Lannin)1538694631.0

I've never been to Chicago, but I feel like that city has that effect on people. I must visit, even if their idea of pizza is totally wack.

A giant pay cut is totally worth it if you will be a thousand times more fulfilled and feel better about what you do when you wake up every single day.

Deciding to get help

This is a difficult decision to make, deciding that you should seek help. It's something to be very proud of.

@Nicole_Cliffe Husband. I was 22 which is Very Young to get married but it's been 20 years this year and what a blast we've been having.
— Allison Hantschel (@Allison Hantschel)1538691679.0

When you know, you know! I love this romantic story.

Heck yes! This one must be hard to admit, but this is incredibly admirable. Share this with someone who needs a burst of positive energy today!