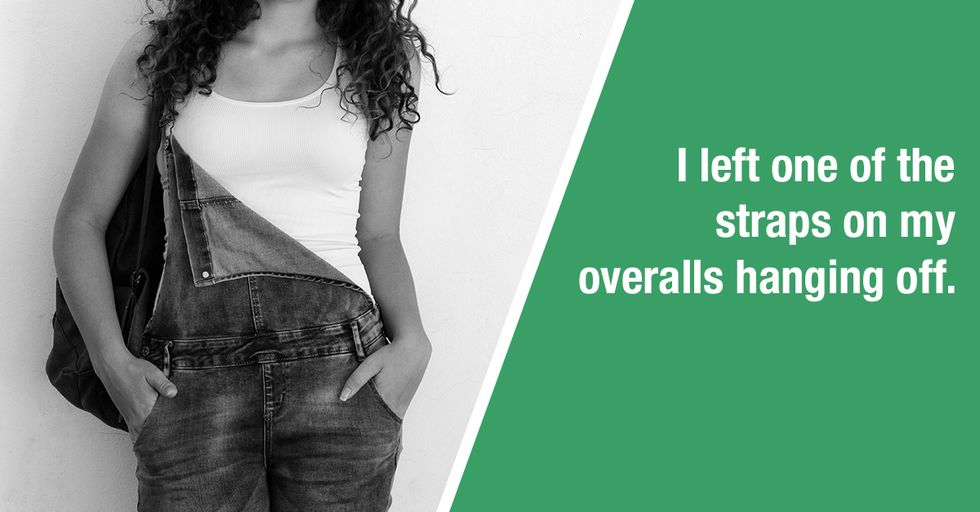 The thing about being a kid is that you think fitting in is the MOST important thing, which means you end up following some pretty weird trends in an effort to be cool.

Don't feel bad, because the good people of Reddit are here to make you feel better about what they did in an effort to look totally rad.

But be warned — you might have some epic flashbacks...looking at you, socks pulled up over your pant legs in an effort to look like Hammer.

And you couldn't switch from side to side because it just felt awkward on the other side, so just go ahead and make a chiropractor appointment now.

I suppose that would give you an alternative view of the world...

Maybe it's short for "Michelle?"

That's one way to keep the bears — and probably most other people — away.

True story: When I was little I wanted to impress my mom so I was swinging really high and jumped off like "Super Grover" from Sesame Street and landed on my tailbone. Oh, the memories. The very painful memories.

But you had it there just in case you suddenly decided to go for a ride. You know, what a skateboard is for.

You were just improvising, right? But they were probably a little too freaked out to bug you about it (pun totally intended.)

I can do you one better. I used to use plastic colored bracelets as a retainer. Then of course when I actually got one, it was the last thing that I wanted.

And he's rounding first, heading for second with a stand-up double! (And the crowd goes mild.)

I guess it's better than putting it on your forehead. After all, that would just be crazy (and we can't talk about that.)

You do know you could have just gotten frames with clear lenses, right?

Let's hope there was a pair of boxers under there, otherwise you know there's going to be a wardrobe malfunction...more than the fact that they're wearing freaking snap pants.

Yeah, the ladies love that. Douche.

The bonus is that it also doubled as a weapon. Who doesn't want to model their look after animated personalities?

So werewolves eat fire ants? They must, seeing as I just read it on the Internet which means it has to be true.

And not very practical if you have to try and outrun a fire ant-eating werewolf.

The first rule of Fight Club is you don't tell anyone that you only fight yourself.

Does the fact that it was 1989 make it worse or better? Your call.

I think that says a little more about the other people in the group that it says about you. Sure, you're a weirdo, but you would probably check on someone who (kind of) fainted.

Everyone looks super punk in a hoodie purchased from Kohl's at a Super Saturday sale.

Maybe if it was the fifth day of first grade and not the first day of fifth grade, this might be kind of impressive. As it is? Not so much there, Rainman.

Who? Me? Yeah, totally just resting a minute. Carry on.

Now I don't mean to judge here, but attempting to collect body parts is kind of getting into stalker territory.

"How are you?" "To the extreme I rock a mic like a vandal. Light up a stage and wax a chump like a candle..."

Do they make a bracelet for Hoarding Awareness? But at least your heart is in the right place — displayed their on your wrists.

I don't think this was ever even close to being a thing? Who in the world does this?

The fact that the teacher played it in class is actually kind of impressive. The idea in theory? Not so much.

A Pack of Lies

Who can argue with a howling tween? (Maybe throw in a hairball from time to time for dramatic effect.)

Sure. Drag mom into your web of lies. LIES!

On the one hand, being well-read is extremely impressive. However, one has to actually read the books, so there's that.

And that's the reason the teacher no longer tracks the teeth that students lose.

The really sad part is that he's still doing this at age 44. Make mine a double!

And was completely taken off sugar and any caffeinated beverages.

Don't even try. There was no replicating Hammer's pants. They. Were. Epic.

At least you kept them out of your pants. I'm thinking that wouldn't go over quite as well with the people at church.