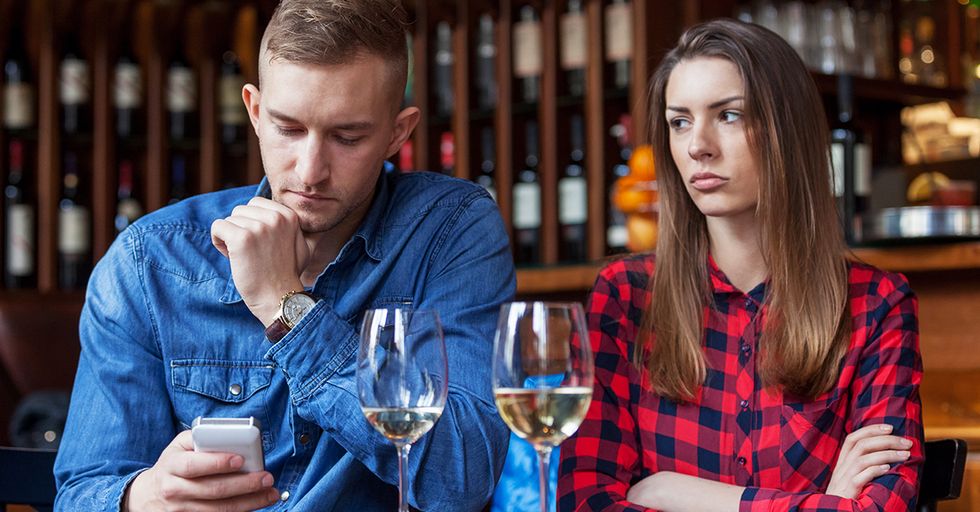 Dating is maybe one of the worst things in the world that we as a species have decided is an acceptable thing to do.

That being said, there are definitely people who don't know how to do it properly.

It shouldn't be that hard to act like you are a normal person on a date.

But it is for a surprising number of people. For those people, Twitter came out to share the things you should never do on a first date. Weirdos, take note.

Wings are definitely a tricky thing to eat on a first date. You want to stick to things that won't get all over your face or get stuck in your teeth.

While this is hilarious, it probably shouldn't happen on a first date. I don't know where you'd go that could provide you that many grapes, anyway.

Definitely try your best not to do this. I don't think that will end well for anyone involved.

This especially won't work because farts rarely sound like frog sounds. Just please, please do not do this.

This should be like number one on the list. Bold those letters, scream it from the rooftops. Do not mention your ex on a first date.

This is definitely a no-no for a first date. This is more like 200th date kind of stuff.

Hot tip: If your date shows up in a creepy white van and offers you candy, he's definitely a sexual predator.

Oh man, this seems like something that happened to this person, and I feel very sorry for them. This is crazy. The next one is actually a real, useful tip.

Sure, when you're on a date, you want to eat something that won't make you look like a monster. But don't eat a salad just because that's what you think your date will find acceptable. That's some bs.

Let's expand this one and just say that you should never put Crocs on your feet for any purpose whatsoever.

I don't really know who would do this, but this should be pretty self-explanatory. Please don't do this. That automatically lets your date know you are a crazy person.

This is a no-brainer. If you can't sign your own car loan, I don't want to date you, period.

Wait for your date! This is absurd! I understand if you're nervous, but this is too much. The next one again seems like a no-brainer.

There's a lot of emphasis placed on how you should eat on a date, and for good reason. If you slurp your noodles in public, you're a crazy person.

I think it's safe to say that any crazy talk about the future that implies you two having kids or a family is way too much for a first date.

If you are on house arrest, you probably can't make it on a date, but if you somehow do, hide that bracelet, baby!

Don't talk about how you want to name your eventual children when you are on a first date. There's very little chance that won't totally freak your date out.

Actually, please do this because that will let me know right away that we shouldn't have a second date. Share this with someone who might need to learn a thing or two about dating.