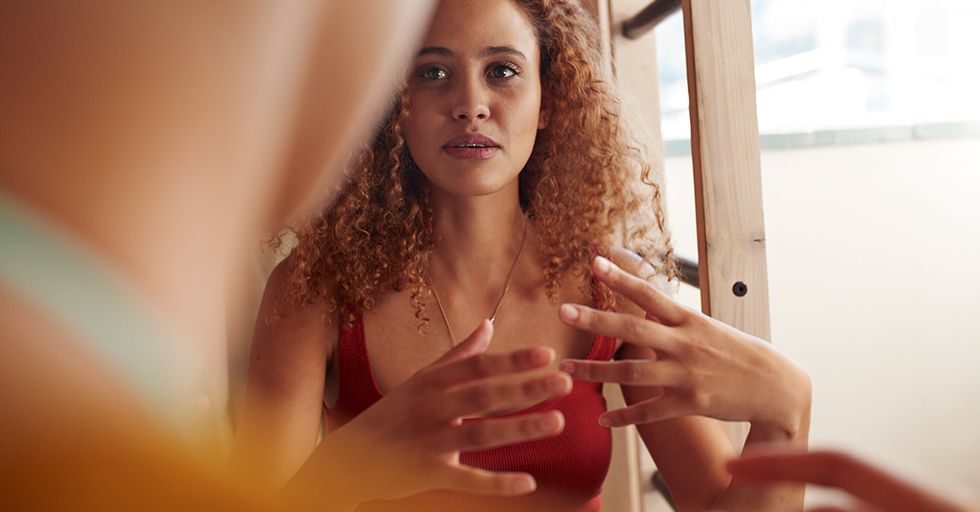 And sometimes, we find ourselves in such a place where we need to hear a specific message that will help lead us through those difficult times.

Often, these words of wisdom come to us unexpectedly.

Below, 19 people share the great advice or words of wisdom that they heard at exactly the right time in their lives. Maybe these messages will help you too.

When I was 38, I contemplated beginning a two year Associates Degree in Radiography. I was talking to a friend and had almost talked myself out of doing it. I said "I'm too old to start that. I'll be 40 when I get my degree." My friend said, "If you don't do it, you'll still be 40, but without the degree." I'm nearly 60 now, and that degree has been the difference between making a decent living and struggling to get by. –luckyhenry

My mom was dying. A friend told me "you have your whole life to freak out about this-- don't do it in front of her. "

It really helped me to understand that my feelings are not always what's important.

It IS possible to delay a freakout, and that skill has served me innumerable times. –DiffidentDissident

"It's only embarrassing if you're embarrassed." Changed my life forever. –eyecebrakr

I met a person who was in a wheelchair.

He related a story about how a person once asked if it was difficult to be confined to a wheelchair.

He responded, "I'm not confined to my wheelchair - I am liberated by it. If it weren't for my wheelchair, I would be bed-bound and never able to leave my room or house. "

The next one is so important for everyone to learn.

"The person that you will spend the most time within your life is yourself, so try to make yourself as interesting as possible." –PM_ME_WALLPAPERS

Paraphrasing what another Redditor told someone, but it was basically "don't be a dick to your dog. He's a few years of your life, but you are all of his" –kwyjiboe

"Think of a time you were embarrassed, easy right? Now think of a time someone else was embarrassed. It's a lot harder to do isn't it?" I don't really worry about being embarrassed anymore if no one but I will remember it! –Bmonroet

"Everyone you meet knows something you don't." My grandfather told me this, and it's been a good reminder that I am surrounded by teachers. –maelfey

Not sure who said this to me, but I heard this in my late teens, and it completely changed the way I think forever:

"If you think you know something, find someone who disagrees and listen to them."

It has taken years for that to fully sink in, but it's a never-ending process.

The last part, the part about actually listening, is the tricky part, and it took me many years to get it right.

But it's the best advice I've ever heard, and it changed my life more than any other single piece of advice.

I also think it's the advice that most people on Reddit need in their lives. –apopheniac1989

The next thing is important to tell yourself once in a while.

Close friend said: "I know you're sad, but don't let this ruin the things that are still good in your life."

Was a real eye-opener. Things can go bad, a lot can go bad, but there's always good in your life.

Be sure that the things that are still good in your life aren't ruined, just because something went wrong along the way. –tony_bologna

My dad once gave me and my brother each a dollar out of nowhere. I scoffed and said, "Dad it's just a dollar, you keep it." He got really mad and said, "Never try to give anything back that someone gives you. It could be all they have to give and a huge sacrifice to them." I felt like such a dick. And I could really use that dollar right now. –zucchiniboat

Do it to do it

Made me really think about my motivations for doing things as I moved forward. –corneliusthedog

Not said to me, but I read it.

Forced me to think critically about life situations and seek out the good in any situation. –mikenothing

The next one really got me.

Don't set yourself on fire

"You are not required to set yourself on fire to keep other people warm."

Really hit home for me, since I grew up trying to mediate my parents' issues and had multiple friends in and out of the ER for mental health crises during my teen years, among other things.

As someone who spent the majority of her life feeling like she had to take care of others at all costs, it was kinda a shock to the system to hear that I was allowed to have my limits even with people who truly needed help. –maeEast

I first heard this phrase when I was younger, and thankfully it knocked me back a few pegs. –TheYellowKingg

"Just because it doesn't get better today or tomorrow doesn't mean it'll never get better, so just hold out for the day when it does."

My SO said at the beginning of our relationship when I had a lot of pain to deal with and was ready to give up.

When I joined the army, I went to Germany and had to go to a new-person briefing by the Chaplin.

I'm not religious. I don't give a damn what the Chaplin has to say. Happily, the Chaplin didn't talk about Jesus or abstinence or any of that.

What he said has stuck with me ever since, through many moves and life changes:

"When you move to a new place where you have no friends, you're going to be lonely.

Don't kill yourself and don't get married." –DreadlockPirateSam

Enjoy what you get

A small thing, but vastly more important than it sounds:

I was on a bus once, and we came to the railroad tracks. There were some cars sitting in between us and the next red light, so if a train came, we'd be stuck until it had passed.

That was always a couple of annoying minutes.

Then the light turned green, and the bus went across the train tracks without having to wait for a train.

Pheew, crisis averted. Then, behind me, a mother said to her small child:

"That was too bad; we didn't get to see the train today."

That was the perfect way to frame that. Why not enjoy what you get? –AF79

Share this with someone who could use these words of wisdom!