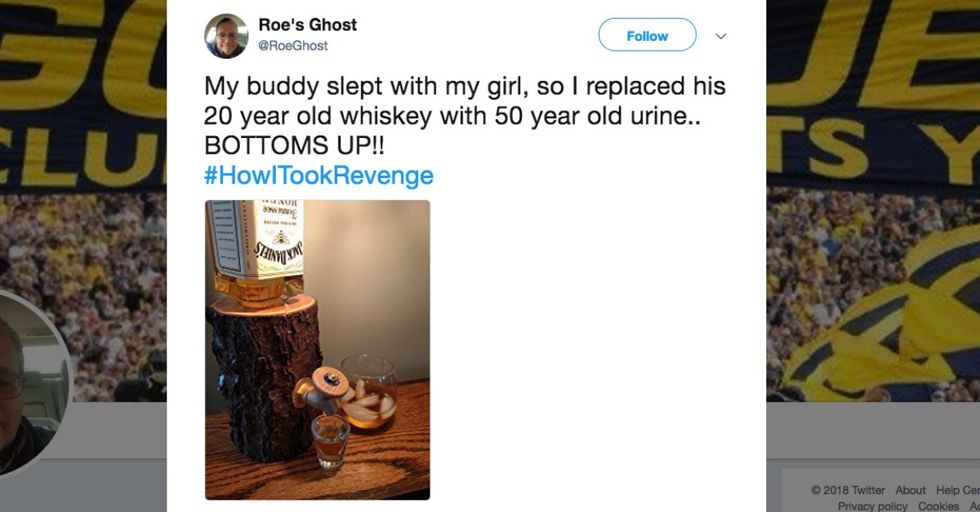 29 Evil Geniuses Share Their Stories of Getting Petty Revenge

When someone does something to betray you or your trust, how do you react? Do you decide to be the bigger person and ignore them to continue living your own life? If so, I applaud you!

...But I also think you're missing out on a great opportunity to get revenge.

Sure, revenge isn't exactly the healthiest option out there, but it's often very satisfying, and I think there's something to be said for that, right? Whether it's "accidentally" leaving your smelly shoe under their pillow or, as my older brother once did to me, putting a bunch of soap in your Dr. Pepper (yes, it was very gross). Getting revenge is something of a work of art. When it's done well, even your victim has to admit that you've impressed them.

Of course, the best revenge is that which is not gotten at your expense, but at someone else's.

That's what brings us here today.

People started tweeting with the #HowITookRevenge hashtag, sharing their pettiest revenge stories. They might shock you...or they might give you a great idea for the next time you need to get revenge!

Do you think he even noticed? I'm pretty sure he definitely noticed.

I think that if someone did this to me, I would immediately give them anything they want. It's the only reasonable response.

Wait a second. Nair isn't for washing your hair; it's for removing your hair. ...Oh. I see.

There's only one way for that to go: Badly.

Have you heard the good news?

This might be even worse than the telemarketer move. 7 am on a Saturday?! I would riot.

I really hope no one tries to get revenge on me someday. Goodness knows there are plenty of pics to choose from.

Next time you betray someone's trust, I hope you're completely caught up on all your TV shows. Otherwise, you're in for a world of hurt, my friend.

A simple technique, but undoubtedly effective. I like the cut of your jib.

Having worked in a coffee shop, I can attest that I definitely did this sometimes when customers were jerks. And I do not regret it even a little bit.

I'm trying to imagine the shocked look on her face. Although, it may have been hard to tell she was shocked without her eyebrows.

Hey, maybe he just used Twitter to share funny pictures of cats and not embarrassing things about himself! (I'm guessing that's probably not the case, though.)

This is a great example of "work smarter; not harder." You could have removed all of the keys, but you didn't. Just the vowels.

They say revenge is sweet. This person took that quite literally.

Hey, it's a classic for a reason! No need to reinvent the wheel, here.

This is truly the ultimate sacrifice. I hope that biscuit tasted just a *tiny* bit better with the hint of spite added.

You may never know.

Imagine living the rest of your life knowing that someone had done something to get revenge; you just didn't know what. Honestly, the thought is pretty horrifying.

An oldie but a goodie!

I call this one a Jo March Special (because Jo from Little Women sprinkles fruit with salt instead of sugar).

That's one way to get a dryer.

He got a motorcycle, you got a dryer. Everyone's happy! (Assuming that the dryer made you happy, that is.)

I can smell it from here.

Everyone loves Chipotle. No one wants it in their car, though. (Subway would be even worse!)

There's no coming back from that one. Not ever.

Do what ya gotta do.

Hey, subtweets are useful tools! My entire account probably wouldn't exist without them.

Why were those even in her closet in the first place? I don't even need to know what she did. I'm on your side.

Would you say that's How You Remind [him] about you? And let him know he's Never Gonna Be Alone?

You said you didn't have enough time for us. Well, guess what? Now you've got LOTS of thyme!

If you don't think this is enough to drive someone nuts, you've clearly surrounded yourself with the right kind of people. (And, you've never watched Office Space.)

It's the revenge kids can see!

The best revenge is living well. Go get 'em! Share this with your pettiest friend!