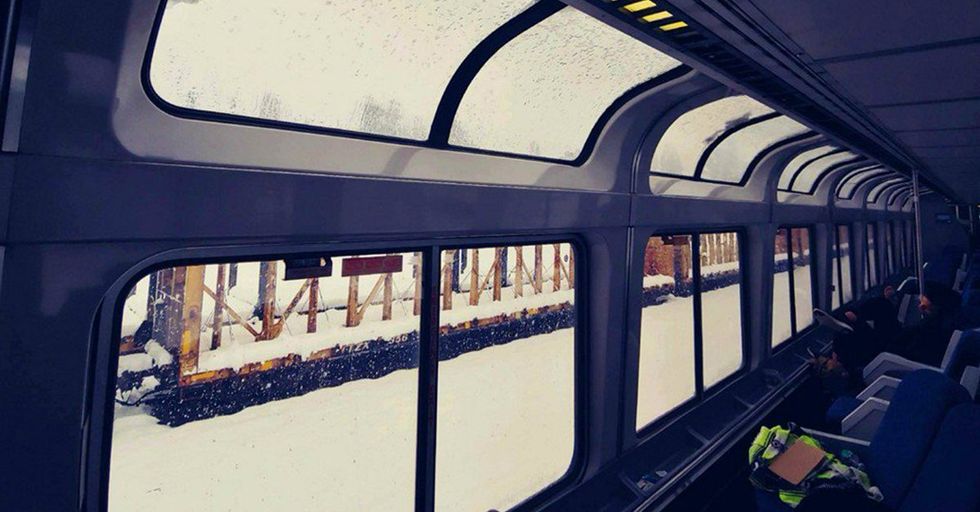 I love taking the train! It is just like an airplane but you don't have to spend the entire time worrying about falling out of the sky! I used to take Amtrak all the time home from college, from Boston to New York, and that three-and-a-half hour train ride was always a perfect time to relax, recharge, and get some reading, writing, or napping done.

But I have never taken the train during a giant snowstorm. Apparently, it sometimes does not go so well. This past weekend, a train left Seattle and headed toward LA, but long before it got too sunny California, it had to barrel through the wilds of Oregon. There was snow everywhere and trees too, and one of them fell across the tracks. Because of the conditions around the train, it had to stop literally in its tracks. No one was hurt, but it has been stuck there for days. It is a real situation.

Trains are a miracle of modern transportation.

They really are so fun. Especially if you are taking a long trip and there are snack cars and sleeper cars. I'm a huge proponent of train travel.

But of course, not all train trips go as smoothly as possible.

Extreme weather conditions have the power to derail train trips, both literally and figuratively.

A recent Amtrak trip from Seattle to LA got stuck on the tracks near Eugene, Oregon.

The train hit a tree, and though no one was hurt, all 183 passengers are now stuck on the train and have been since Sunday.

That's a really long time to be stuck on a train.

Not only can the train not move, but it's been snowing consistently since Monday. There's more than a foot of snow surrounding the stranded train.

I don't know about you, but if I was a passenger on this train, I would be freaking out. Rescue efforts started immediately, but it's still taken a few days!

Here is the statement from Amtrak about the accident:

The intense power outages and extreme weather in the surrounding area led Amtrak to make the decision to keep all the passengers on board.

Yeah, that's a big nope from me.

According to passenger Rebekah Dodson, the train hit low-hanging branches, and the damage disabled the train. The crew tried to repair the train until 1 a.m. on Monday, but the train wouldn't budge.

Over the first 24 hours, there were a few announcements, but no solid good news.

I'm surprised that everyone is remaining calm. Trains may be pretty big, but that's still a confined space to be stuck in with strangers for several days.

After 35 hours on the tracks, there was still no end in sight for the train's passengers.

Dodson told The Oregonian, "It's been difficult to keep people's panic down and morale up because we have no idea when we're getting off." Yeah. That's understandable.

Even if they wanted to get off the train, there's really nowhere to go.

That has got to be tougher to deal with than you can imagine. It did not take people long to start making Donner Party jokes...

Here's what it looks like from the stranded train:

This picture looks kind of cozy, and I'm sure it would be a lovely ride...if you weren't stuck in the middle-of-nowhere in Oregon.

This video shows how people are trying to pass the time.

They're playing card games and taking naps and trying to do anything to entertain themselves.

At one point, they announced that there would be a ukulele performance for the kids.

After two nights on the train, I bet these strangers know more about each other than they ever planned to!

It seems like people are in relatively good spirits considering.

This is definitely going to be a story every one of these 183 people will be able to tell at parties for the rest of their lives.

Of course, after so many hours on the train, Amtrak had to start feeding people.

Amtrak said it was working to help the passengers on the train and that they were not being charged for food or wat… https://t.co/s6xtf61WPZ
— USA TODAY (@USA TODAY)1551187144.0

According to passengers on board, they were fed breakfast and lunch, but other than that, they were sort of on their own. This is a good reminder to always bring snacks when you go on a trip!

One passenger claimed that the food hoarding has begun.

@StuckOnAmtrak The food hoarding has begun. I'm considering saving half my dinner steak and making jerky on the room heater. #stuckonamtrak
— Tracy27 (@Tracy27)1551145958.0

Pretty sure this is a joke, but it's still kind of believable. When you have been stuck on a train for more than 35 hours, you have to start rationing!

And think of the little kids on board!

Parents probably only had a small stash of diapers and supplies for their small kids with them! They never anticipated being on the train for days on end.

This is a real Snowpiercer situation in the making.

Chris Evans may have had to up-end the whole train system in Snowpiercer...

...but we are hoping that the Amtrak situation is resolved a little more peacefully. We're sure it will be.

OK, who else has the song "Drops of Jupiter" stuck in their head now? Train (the band) should do a free show for the passengers of the train (the train) when they're rescued.

We're all thinking of the poor passengers in this situation.

But we can't forget about the Amtrak employees who have been doing their best to keep everyone comfortable and happy.

Finally, early on Tuesday morning, some progress toward rescuing these people had been made.

The railroad decided to send a train that would tow the stranded train into Eugene, Oregon's station.

Of course, because Amtrak can't catch a break, there were a few delays along the way.

Even though the rescue mission is now underway, it will probably be a good long while before the train makes it back.

Needless to say, passengers and Amtrak employees alike were ecstatic when they started moving again.

These people are heroes. I mean, I think I would have been a little crazy at this point.

Dodson herself tweeted her relief:

Hallelujah! The hashtags really say it all. "#hurryup" and "#wearehungry" pretty much nail it.

Even though the train is on its way to Eugene, Oregon, it is really slow going.

Update 2: A passenger on the stuck Amtrak train says Union Pacific reached them about an hour ago and are towing th… https://t.co/ssY7TPaYUa
— Everton Bailey Jr. (@Everton Bailey Jr.)1551196584.0

Two miles in an hour! That's got to be a little bit infuriating. You think that you're rescued, that you'll speed toward your destination, and then it's more like a crawl.

Here is Amtrak's latest statement about the situation:

Although they made a tough decision, it does seem to have been the right one. Keeping the passengers on the train was the best way to ensure everyone's safety.

I'm so glad that no one was hurt. Even though this was a major ordeal for 200 people, they will all be OK, and that's what really matters.

As soon as the train arrives in Eugene, they will be greeted with supplies and care from the Red Cross.

The Red Cross is setting up at the Eugene train depot to help @Amtrak passengers who should be arriving here hopefu… https://t.co/HW2essr2rU
— Tim Gordon (@Tim Gordon)1551204116.0

I can't imagine the relief that will come to these passengers when they are back on solid ground.

If I was one of those passengers, I probably wouldn't ride a train again for some time. Share this with someone to spread the news.