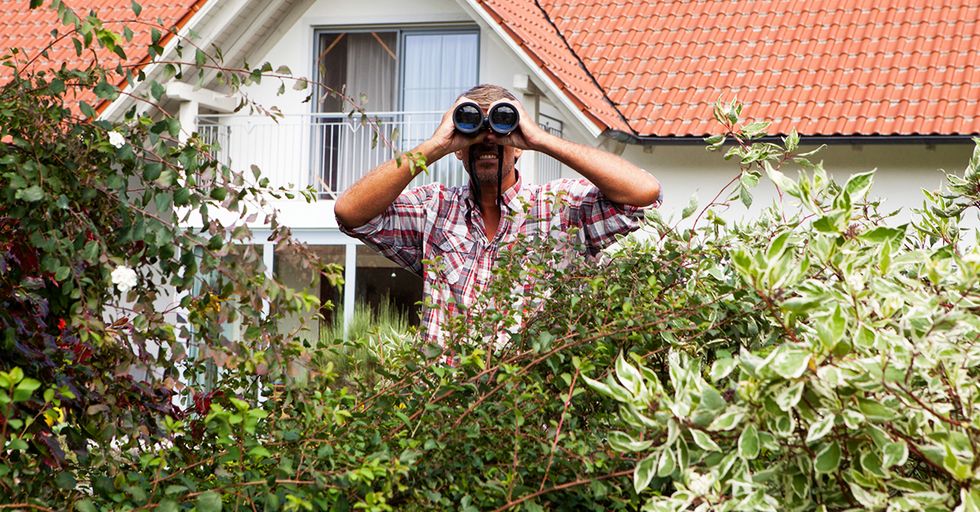 19 People Tell Us About Their Most Awful Neighbors and Boy, They're a Doozy

We're long past the time of Mr. Rogers-like friendly neighbors.

If you have a good relationship with your neighbors these days, man, you are lucky.

But more often than not, our neighbors are....weird.

And if they're not weird, they're straight up mean. The people of Reddit are sharing the stories of their worst neighbors, and boy, these are crazy...

I moved onto a dirt road with several houses on it. My friend has lived down the road his whole life. The people next to my house only come up for the summer and are never there in the winter. When summer comes, however, there's multiple potholes on the road. Curious, I asked my friend. He said the neighbors come up in the summer and dig the holes themselves in order to 'slow down' traffic. So, that. –emf3rd31495

Neglected their daughter to the point that she'd sneak into our house and steal food from our kitchen. CPS was called. –Bedlambiker

Ripped up and threw away my mum's sweet pea plant that she got from her friend who died of cancer. When she complained he started ranting about how our garden is a disgrace and an embarrassment to the neighborhood and we need to replace all the grass and plants with concrete. Prick. –annoyednerd2

It started by letting her kids and animals run wild in my backyard. So, I dropped $5k on a 6' privacy fence that my father-in-law and I built. Then she had her water turned off for lack of payment and began pooping in plastic bags and throwing them over my fence. When confronted about it, she kindly denied and then took to social media. I called the landlord and had an eviction notice served the next day. –Durania The next one is actually really creepy...

He used to stand on the footpath drunk every afternoon and yell to my husband about what a bitch I was. Once my husband told him to go home and he shaped up to try and punch my husband, who was around 50 years younger than the neighbour. My infraction? He rang one day to  check why my husband's car was home on a workday. I politely thanked him for his call and let him know my husband was sleeping and had a cold, nothing to worry about. Apparently, I was meant to praise him profusely for being such a caring neighbour, and my husband was meant to follow up with a call once he was awake and also lavish him with praise for caring. Because we didn't, we got to hear about it loudly every afternoon until we moved several months later. –macadamiaicecream

I'm pretty sure Sundays are for my upstairs neighbors to suplex their children and push over bookcases. –BIG_PY

Yelled at me for entering a shared garage to get some of our stuff. He later claimed I was after his gun, which was stored in a gun locker with a lock, that only he had the key for. He was in his 60's or 70's at the time. He died last year, though. –Sharkey_B

Screamed obscenities through the wall at my children because they were “talking too loudly" in the middle of the day. Screamed at us through the walls in the middle of the night so we could “see how it felt to be disturbed." Regularly dumped his old food out of his bathroom window into our shared backyard. Rodent infestation took place shortly thereafter. Stopped paying rent to our landlord because he felt that the landlord should have warned him that he might be able to hear his neighbors. Dumped his trash on our shared front porch. Landlord did not renew his lease. Took him to court, got his unpaid rent money back plus additional payment for damages to the apartment. It was a glorious vindication. –Zamboniqueen

Late last year mine said he'll bash me because I got his driveway wet while I had the sprinkler going to water my yard. Not even joking - he flipped his sh*t over his driveway getting water on it! He's a drug addict so... yeah. –Chromattix The next one will make you shake your head in disbelief...

Called the cops on our then 6 yr old son because he was playing outdoors on public property. It wasn't a road or anything. There was no danger whatsoever. He wasn't screaming or anything, she just didn't like kids. She also told our 3 yr old daughter that she was ugly. –azerty1976

His dog went through our trash and got sick. Dog ended up needing to go to the vet and told me when he bumped into me at my old job. "Yeah, it was like 5 grand to get her back to health. You're lucky I don't bill you guys" Mind you this guy let his dog go through everyone's yard and shit wherever it wanted, it's not like the dog escaped, he just willingly didn't care. Last time I saw him the cops were in his driveway with an apparent domestic incident. –The_Axem_Ranger

Rang my doorbell at 4 am over and over and asked me to go with him because there was an emergency and it was important. Went with him and he took me over to his car and started asking what I thought of it and looked very proud. In other words, this dude rang every apartment in the building at 4 am to get people to look at his new car. –Aqueluna

Moved in with 2 cats. Decided she would rather have a dog. Took the 2 cats, set them on her porch and made them "outdoor cats". Stopped feeding them. Didn't spay either. Now our neighborhood is overrun with 10 or so male cats and these 2 have a new litter each every few months. Assholes. Animals aren't a decoration you can just throw out when you're bored with them. They are living creatures, dammit. –Jack_is_a_Potato

They use our trash bin and ram it full of bags of their gross nappies. I so badly want to take the bags out and leave them on their doorstep. –Clairdassian The next one is upsetting...but at least it has a happy ending.

Picked a fight with our 70-year-old Indian neighbour. Like, an actual physical fight. F*ckstick is in his 30's. Indian neighbour has seen waaay too much bullsh*t in his life to tolerate any more and hit him with a nectarine tree in a pot. EDIT: yes the tree is ok. Hilariously, he actually gifted it to me last weekend after I helped him do a bunch of trellis work (we're both keen food gardeners). –Taleya

My former neighbor poisoned our dog, causing his death. That guy was always a major dick to our family. –BaconCharizard

I just moved into my new apartment in Chicago and was woken up at 3 am to some loud knocking on my door. Given it's Chicago, I thought the worst and assumed someone with a loaded gun was on the other side of that door. A moment passes and I sit silently in my bed running through self-defense scenarios in my head. I then hear a woman yell something through my door that had me on tilt... This lady says, "This is your neighbor, I was just wondering if you'd like to buy some girl scout cookies". Naturally, I ignored her offer and proceeded to go back to sleep angry and confused. Either my neighbor was high AF or trying to rob me. –Norezu

He would blast sh*tty EDM music almost every day starting from 9 am, especially on the weekends, and once I asked him to please keep it down until 10 AM he changed his habit.. to 8:30 am. –alderchai

I've posted on Reddit before about my upstairs neighbor who (long story short) got super heated about how I didn't see him in the hallway and say hi once, and then blamed his outburst on the fact that laundry makes him cranky. He drunkenly tried to get into my apartment last Wednesday afternoon, and then asked if I had a problem with him. When I explained that his behavior makes me uneasy, he called me passive aggressive (?) and then said EVERYone forgets where they live sometimes, and he'd forgotten where his apartment was because he was humming as he walked up the stairs. It must be so paralyzing to be that allergic to admitting fault. –clocksailor Share this with someone who understands the neighbor struggle!