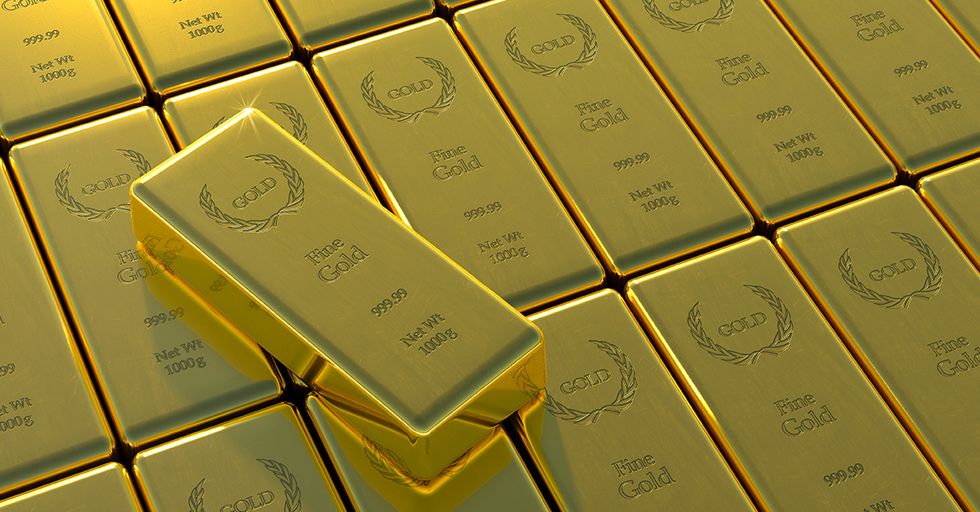 Throughout your life, you've probably touched hundreds of thousands of different things.

Some of them are probably worth only pennies — like shoelaces, toothpicks, or literal pennies. But other things you've touched may have been worth a lot of money.

For instance, I personally have touched a piece of the actual Titanic, fossils that are more than 65 million years old, and space shuttle tires that have been in space.

What sort of things have you touched?

A recent AskReddit thread gave people the opportunity to share stories about the most expensive things they've ever touched in their lives. Here are some of their answers.

A $145k Italian made double rifle in one hand and a glass of $7 wine in the other. I put down the wine when they told me the price of the gun. –murde3rsaurus

A check for a lot of money:

Used to work at a bank as a teller. Once held a 3 million dollar check. Written out to himself from his business account within our bank, so I could verify he had the available funds. Kind of surreal. At the time I distinctly remember thinking "This is worth like 50 years of work for me." Just crazy. –Cannibal808

Part of a Gutenberg Bible. It was in a sealed case and we moved it from a van to an elevator. –imhoots

I've driven an Aston Martin Vanquish, and all I could think of was "don't crash, don' crash, don't crash." –DarkPasta (Makes sense! Those things start at around $250,000!) This next one is kind of unexpected...

I once played the piano that Rachmaninov took around the country with him when he played here. I don't know how much it was worth, but it was a nice Steinway, and it used to be Rach's. Also, yes, I did play Rachmaninov on it. –PM_ME_LOVELY

Picked up a gold bar worth $250K back in 1988. Bloody heavy which has made me laugh at movies where they steal gold by putting 20 or so bars into each duffel bag and carry two bags at a time. –imapassenger1

I used to drive a forklift and had a pallet of medicine worth over $200 million to transfer to a semi. Kinda weird to think how much money I could waste by f**king up back then. –TheHeroYouNeedNdWant

A tray of about two dozen limited-edition Patek Philippe watches. They were worth something like $1.5 million USD. –GeoChef

I shook hands with my boss once. He's worth millions. –Burlish Quick! What's made with more than 12,000 pipes and is worth millions of dollars? This next person knows...

A large organ. It was worth many millions of dollars and featured nearly 12,000 pipes. –Back2Bach

My violin teacher bought one of Beethoven's violins. She had me play it to feel the difference between a 1k and 250k violin. No, I didn't focus on listening to the tone. I was focusing on not dropping/snapping it. –proCRAPstinator

Printer ink. I am a simple man. –afrocircus6969

I had to pick up a dog at my job, found out while I was carrying him that he was worth 15k. He's a creepy looking french bulldog that was bred to be handsome. –Dovahmaster

I went to visit a friend who worked as a jockey. We were in the stables she worked at and she's like, "Go pet the horses, they're friendly." So off I trot to scratch a nose or two. She wanders over a few minutes later and laughs. Apparently, I made a beeline for the most expensive horse in the place ~$1.5 million if I recall. –likeaninja Next up, a super expensive metal cup...

I was lucky enough to hold the FA Cup once. The FA Cup is a historic football competition which is over 100 years old. It's hard to value the trophy itself but it was on Antiques Roadshow last year and they valued it at over one million pounds. –hunterfam55

My wife’s diploma for her master's degree. Student loans are no joke! –Jimothy_1

Astronomer here! This is actually a hard one to answer because, as anyone knows, truly valuable and unique things do not often have an actual price because they can’t be bought for anything. Like, I held Hubble’s glass plates he used to establish the scale of the universe, and include his writing and even has the smudges of his fingers on them (I wore gloves of course!). But can you buy one? No, they’re in the archives of the Carnegie Observatories and that won’t change. But I have no doubt one would be worth millions if you could buy one. –Andromeda321

My cat. He’s had a few surgeries and emergency vet visits. One of which was emergency surgery TWO DAYS before my wedding to remove a streamer from his stomach that he ingested while my friends decorated my house for my bachelorette party. –CloverBun

Moon rocks! I had an earth science teacher in high school who was allowed by NASA to bring them in and show them to the class. She had a suitcase chained to her wrist with them in it. –Gage_B Share this list with one of your friends who has expensive taste!