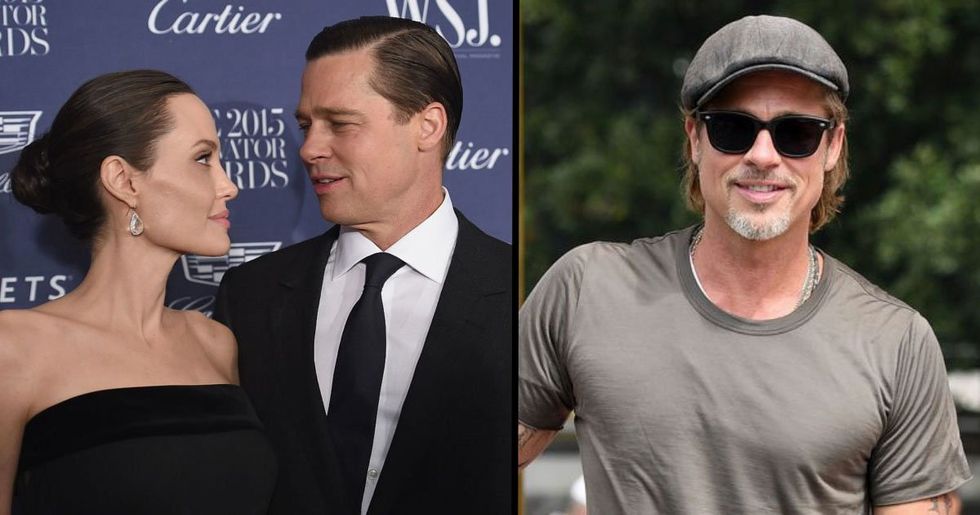 Can you believe that it's been three years since Brad Pitt and Angelina Jolie split?

It feels like only last week that they had that fight on the private jet which led to Jolie ending the marriage and getting the FBI involved to investigate Pitt's treatment of the children. How time flies!

In the three years that have passed since the break-up of one of Hollywood's biggest power couples, neither party seems to have found their next serious other-half. That's not to say that Pitt and Jolie haven't been linked with other big names respectively, though. Earlier this year, it was reported that Jolie might be cozying up with none other than America's lonely pup, Keanu Reeves, whilst Brad was rumored to be growing closer to his first wife, Jenifer Aniston. Neither unions have been confirmed and, for all we know, it might actually be Jen and Keanu that are getting it on. Imagine that... can you think of a more perfect Hollywood couple?

As for Brad and Ange, it seems like the children have been their focus following the split, that and their booming acting careers, and, of course, Jolie's tireless work for humanitarian organizations.

But, as busy as the pair have been, as with any celeb break-up, someone always has to have the last word.

With the unveiling of his latest tattoo at the photocall for his new movie, Ad Astra, at the 76th Venice Film Festival, it seems like Pitt doesn't quite think that the conversation is over.

There's no denying that Angelina Jolie and Brad Pitt were the picture-perfect Hollywood couple. After a rocky start, having seemingly got together on the set of Mr & Mrs. Smith, while Brad was still married to Jenifer Aniston, the pair went from strength to strength.

Brad and Ange got a fair few tats while they were together.

Brad has got Angelina's birthday, June 4, 1975, inked on his torso, a skinny cross with all of the Jolie-Pitt family initials on his right forearm, and he's got a couple of lines on his back that Jolie reportedly inked on herself! Kinky...

Most of Jolie's tattoos are related to her children and she seems to favor yantra Buddhist designs. When she adopted her first child, Maddox, Jolie got a Cambodian yantra tattoo on her shoulder blade. This was added to when she directed the memoir of Cambodian writer and activist, Loung Ung, with the Netflix movie, First They Killed My Father.

Either a Buddhist monk or a special practitioner can ink traditional yantra tattoos. Jolie is evidently a fan of seeking out specialist tattoo artists, having traveled all the way to Bangkok twice to get tattooed by Sompong Kanphai, who chants a Buddhist blessing while doing the ink.

In 2004, Jolie got a Bengali tiger inked on her back to celebrate her citizenship.

At twelve inches long and eight inches wide, the Bengali tiger is perhaps the largest of all Jolie's inks, which she got tattooed on her back in 2004. This was also the second inking that she had gotten Kanphai to do.

In 2004, Jolie also got a tattoo on the back of her neck which read: "Know your rights." The tribute to the English Rock band, The Clash, I'm assuming was not inked by Sompong Kanphai. In regards to this inking, Jolie explained that it is a slogan of empowerment, "humanitarian, but a little punk rock."

Jolie's tribute to her ex, Billy Bob, is a little less empowering...

Back in the year 2000, when Jolie married actor, Billy Bob Thornton, she got his name tattooed above the dragon that she had inked in Amsterdam in 1996. After the pair divorced in 2003, Jolie had the tattoo lasered. Laser removal is a painful process and, even after five trips to the removal clinic, the inking is still slightly visible.

Following the regret of the Billy Bob tattoo, Jolie vowed never get a man's name inked on her skin again.

The Billy Bob inking was perhaps not the first tattoo tribute to a love interest of Jolies. She also has "H" on her wrist, which is rumored to be a tribute to ex-boyfriend and fellow actor, Timothy Hutton, whom she dated in 1997 - this has been disputed though, with others suggesting that the tattoo is a tribute to her brother, James Haven.

That being said, Jolie has got a couple of Pitt-related tats.

On her arm, Jolie has inked the geographical coordinates of the locations where her children first came into her life. Adding to the list after the birth of the last of her brood, twins, Knox and Vivienne, Jolie decided to get the coordinates of Brad Pitt's birthplace.

Just before they broke up, Ange got a tattoo to bind her to Brad...

7 months before she filed for divorce, Ange was feeling very differently about Brad...

Whilst vacationing with the children in Thailand in February 2016, Jolie had three symbolic tattoos inked on her back by former monk, Ajarn Noo Kanpai. Following the traditional practice of Sak Yant tattoos, they were inked through a painful process involving steel rods "mounted with a surgical steel needle." Ouch.

Things were so good between the pair back then that they decided to get matching inks.

Although their inkings were of different design - with Brad's being a Buddhist symbol on his stomach and Angie's being three different geometric patterns on her back, the fact that they were both done by the same practitioner and both used the traditional Thai methods is supposedly supposed "to symbolically bind them as husband and wife." The words "We live, we die, we know. But I'll be with you" scrawled above the Buddhist symbol is a sweet additional promise made by Brad to Ange.

Spiritually bound or not, the tattoos did not prevent the pair from splitting in September 2016.

I guess some marital problems can't be solved by both getting inked with a steel metal rod needle...

Jolie had a third Brad tribute tattoo before the split...

For someone who said that she would never get a man's name inked on her again, Angelina Jolie sure got a fair few dedicated to Pitt.

In a Vanity Fair shoot in 2010, Jolie revealed a rather unusual phrase on her upper thigh. The inking reads "Whiskey Bravo," which, to any aviator fans out there, will have an obvious meaning. Given that Jolie and Pitt are both licensed pilots, the inking seems to be an inside joke, as the two seemingly random words are actually Brad's initials in the aviation alphabet. Aw, man.

Brad never got any inkings dedicated to his first wife.

Then again, Jenifer Aniston seemingly wasn't much of a tatoo fan either back then. Aniston only got her first tattoo in 2011, some five years after she split with Brad.

Jen got her first tattoo dedicated to her late-dog, Norman.

Men might let you down, but a dog is an owner's best friend. Jen loved her late pooch, Norman, so much that, upon his death in 2011, she got his name tattooed on her foot.

Brad has had five inkings related to Angelina Jolie.

With ten tattoos in total, that means half of Brad Pitts's body art is related to his ex-wife. Yikes.

Shortly after his split with Jen, and at the start of his relationship with Ange, Brad got an inking very similar to the one that Jolie got when she adopted son, Maddox. This further fuelled speculation that the pair were together and that Brad was involved in the raising of the boy.

As previously mentioned, Jolie apparently inked a series of lines onto Brad's back one night. In fairness to Jolie, the line design is pretty cool and isn't, in my opinion, the worst of Pitt's inkings.

Although it's rare to see Brad flaunting this tattoo, the fifty-five-year-old actor actually has Angelina Jolie's birthday tattooed on his lower abdomen using the Cambodian alphabet. The birthdate was originally the only design on his stomach, but, in more recent years, he has had an intricate design inked over it. A sort of half cover-up, maybe?

Pitt has a sort of stem diagram up the side of his right forearm. To the left in its separate box is the letter "A" representing Angelina Jolie, to the right of that, in a separate box, is the initials of his six children that he shares with Jolie: M for Maddox, P for Pax, Z for Zahara, S for Shiloh, K for Knox, and V for Vivienne.

Brad got the quote from Persian poet and philosopher, Jalal ad-Din Rumi, inked onto his bicep following his wedding to Jolie. The quote reads: "There exists a field, beyond all notions of right and wrong. I will meet you there."

What does the Rumi quote mean?

The quote, although open to interpretation, is probably referring to what is at the core of Eastern religion... It seems that Rumi is describing what is termed "Dharmakaya" in Buddhism: the field of emptiness wherein everything is "as it is." The quote is expressing the notion that good/bad, like/dislike, love/hate are all human constructs and do not truly exist. It is in this understanding that we can gain common ground and understanding. Pretty deep, huh?

Is Brad Pitt a Buddhist?

When asked about his religious beliefs by The Hollywood Reporter in 2012, Pitt considered that he did not "have a great relationship with religion" and that he "oscillate[s] between agnosticism and atheism."

The new addition to Pitt's Rumi tattoo has got people asking questions...

Showcasing the new element to his bicep body art of this week's 76th Venice Film Festival, many people have been wondering whether the new addition is a dig at his ex-wife.

There has been no word from Pitt yet as to the meaning behind his latest inking, but the solo figure next to what was previously a tattoo representing the union between himself and Jolie is a little foreboding.

Brad has made no secret of his struggle following the break-up of his marriage to Jolie.

Speaking to GQ in 2017, Pitt reflected on "The loneliness of this new life." Perhaps the new tattoo reflects this new stage of solitude that the fifty-five-year-old is experiencing in his life.

Jolie has not had any more tattoos since her divorce from Brad.

It seems that it's the Jolie-Pitt children that are more keen on getting tattoos now. Speaking in an interview with The Radio Times, Jolie stated: "They’re already asking me about tattoos, how do I say ‘No?'"

Perhaps Jolie will give her brood one piece of advice...

The advice that she failed to stick to herself after the unfortunate "Billy Bob" tattoo... perhaps Jolie will advise her kids not to get a love interest's name or initial or symbolic-whatever tattooed permanently onto their body.