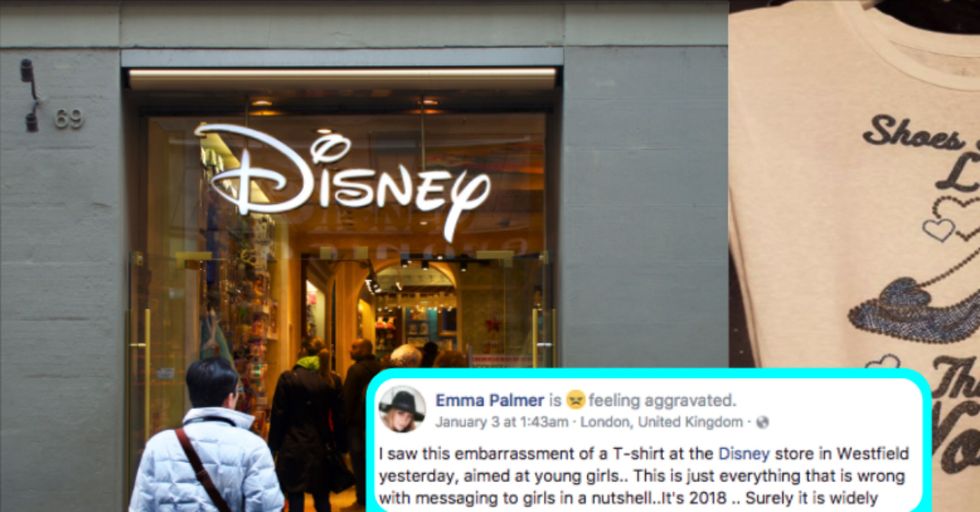 Disney may be the happiest and most magical place on Earth...but that doesn't mean it's perfect.

Take the classic Disney movies of your youth, for example. They're great, but they also contain some messages that might raise an eyebrow or two these days. Like the whole "needing to be rescued by a handsome prince" thing. Or how about the fact that most of the classic Disney princesses tend to attract those princes simply because they're attractive? Luckily, Disney movies have come a long way since the days of Snow White, and young people are getting way better role models in today's movie characters.

But that doesn't mean Disney doesn't still sometimes make a misstep. That's exactly what Emma Palmer discovered on a recent trip to the Disney Store.

When you're at a Disney park, you can count on being in awe of pretty much everything around you.

It has fireworks, it has food, it has your favorite Disney characters walking around the park just waiting for you to give them a high five. There's a reason they call it the happiest place on Earth.

Disney is pretty good at fireworks, but it's even better at merchandising.

If you don't leave a Disney park with at least one pair of Mickey ears, did you even actually go to Disney? And don't forget the Disney stores. Even if you can't swing a trip to a Disney park, you can typically count on a Disney Store carrying something to delight Mickey fans of all ages. Or you might find something that reinforces harmful gender stereotypes. That's what happened to Emma Palmer.

While shopping in a Disney Store in the Westfield London shopping center, Palmer came across this T-shirt:

It says, "Shoes Speak Louder Than Words." Wow. OK, first of all, shoes actually don't speak at all (although they do have tongues!). But there's an even bigger problem with this shirt.
As Palmer pointed out, "It's 2018...Surely it is widely recognised that the content of your mind and words you speak are WAAAAY more important than your f**king shoes!" Preach, lady! The shirt seems to imply that whatever you're wearing on your feet is more important than any words you may have to say. Which is absolutely bonkers! (Actually, now that we think about it, this is almost literally what happens in The Little Mermaid when Ariel surrenders her actual voice in order to have human legs. What the heck, Disney?!)

Most of the people who commented on Palmer's Facebook post understood how harmful the T-shirt's message could be to young people.

It may seem like a small thing to some people, but it's seeing messages like the one on this T-shirt that contribute to harmful stereotypes being passed down for generations. If you're a young girl and are repeatedly being given the message that your main value is found in whatever you happen to be wearing, that's a problem. Some people dismissed Palmer's complaint by talking about how much they loved shoes (as if that were anywhere near the point). She had the perfect response to them...

As Palmer points out, there's nothing wrong with liking shoes. You can smash the patriarchy while also wearing the most glamorous pair of heels the world has ever seen — but those shoes aren't a substitute for having your own thoughts and opinions and being able to express them.
You can be feminine (or not!) and still be a feminist. That's not really the point here. The point is that girls should know that their words are important — much more important than their most stylish shoes.

Oh yeah, and one more thing:

The shoe on this shirt isn't even particularly stylish. If shoes could speak (and remember: they cannot), it'd probably be saying something like, "Hey! I'm an ugly shoe! Also the shirt I'm on is kinda problematic! And probably overpriced!"

She also complained directly to the store. She was initially brushed off by employees but has since heard back that her comments have been "sent to the relevant department."

It remains to be seen whether Disney will make the right call and pull the shirt from its stores.

But in the meantime, we're grateful to people like Palmer who are calling out harmful messages like the one seen above. Now, let's go smash that patriarchy!