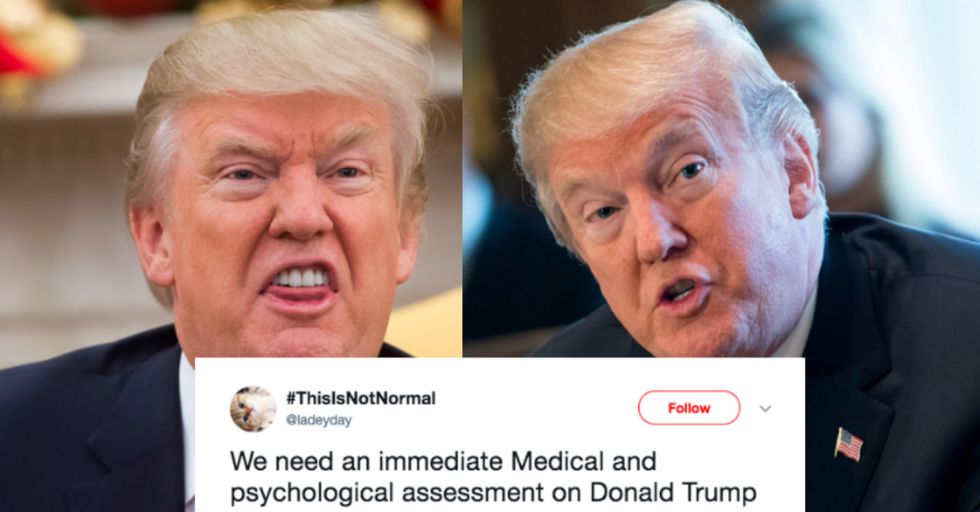 Yesterday, President Donald Trump announced that he would officially recognize Jerusalem as Israel's capital along with plans to relocate the U.S. Embassy there. While on the surface that may not sound like a big deal, it is. CNN reported that "Trump's decision upended seven decades of U.S. foreign policy." The accepted position until now was that the U.S. would not recognize Jerusalem as the capital of Israel until the Israeli-Palestinian conflict — which is clearly so much more nuanced and complex than our president can understand — is resolved. Hamas' political leader called Trump's move "a war declaration against Palestinians." Other world leaders called Trump's announcement "unhelpful" and a "disappointment."

But on to the real issue: Donald Trump's speech. In addition to possibly starting World War 3, Trump, in a speech about his Jerusalem decision, very obviously slurred his speech. Like a lot. It has many theorizing about the state of his mental and physical health, and honestly, the video is pretty appalling.

The difference is stark. His speech is so clearly slurred in the last 30 seconds. It's painful to watch, and it's concerning on several levels. If this is a health issue, the American people have a right to know if the leader of their country is unable to fulfill his duties.

Theories as to why Trump was slurring his words immediately started flying.

Pretty sure our president just had a transient heart attack… listen to his slurring of words at the end. https://t.co/pDipvb5OvK
— William LeGate 🇺🇸 (@William LeGate 🇺🇸)1512601703.0

Many were genuinely concerned that he was having a heart attack or a stroke — slurred speech is one of the most noticeable symptoms of a cardiac event like that.

One of the most tweeted theories was that he was having a stroke.

In addition to the slurred words, he has often demonstrated mental confusion and labored breathing. While it's not really appropriate for people who aren't doctors who've actually examined the man to make assumptions, it's natural and acceptable to be concerned that the man in charge is too unwell to be in charge.

Some believed his slurred speech and teeth clenching were signs that the president was on drugs, specifically cocaine.

Rumors have always abounded about Trump's drug habits due to his erratic and often bizarre behavior, but that's just speculation.

Whatever was wrong, it's clear that something was up.

And many are demanding answers. While Trump's camp hasn't commented on the incident, there does seem to be one prevailing hypothesis about what caused Trump to slur his speech, one that hasn't been mentioned yet...

The guy's wearing dentures, of course!

Faulty dentures would explain the slurring, the lisp, and the clenched jaw. Of course, while having dentures is a perfectly fine thing for an old man to have, we'd rather our president's body didn't start literally falling apart while addressing an international audience, especially when what he's saying is actively tearing apart the rest of the world.

On The Daily Show, Trevor Noah addressed the controversy and started a viral hashtag that's sure to rile Trump up.

#DentureDonald is sure to make steam come out of the president's ears. It might make him so mad that his dentures pop right out of his mouth!

We can't blame Donald Trump's dentures for wanting to escape him. We know the feeling.

This photo just proves that Donald Trump is just like any other celebrity — he used his incredible power and influence to buy himself some better teeth.

You can't blame him for doing so.

What you can blame him for is literally everything else. Trump's character is so narcissistic and his behavior is so erratic and his treatment of others is so shockingly bad.

Now's a good time to remember that we never got a clear picture of how healthy Trump was because his doctor was so clearly a kook.

What probably happened is that his dentures fell out of place, but we've been so lied to by Donald Trump that people actually believed that the man was literally in the process of dying and still trying to ruin lives.