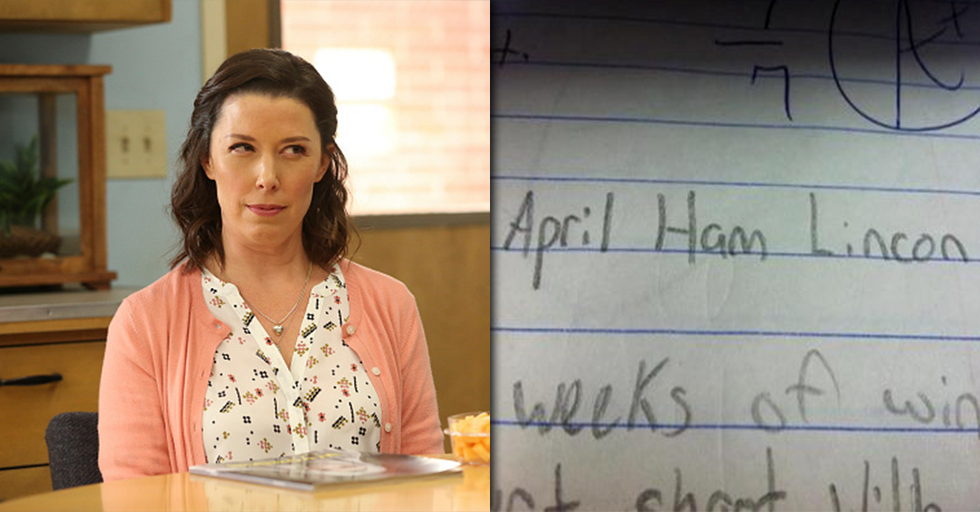 People Who Definitely Thought They Were Using the Right Word

The English language is filled with so many similar sounding words that you're bound to use the wrong one at some point. If you're lucky, you'll slip up when writing an email or jotting down a note to yourself, and you can fix it before anyone else notices it.

The people in today's gallery were not very lucky.

But that's great for us!

It gives us something to laugh about! It also serves as a reminder to make sure we know what word we're trying to use around others.

I'm imagining "Fork Knife" is a game in which you expertly cut a steak until you win. It sounds fun!

[Legit] Keep us posted from BoneAppleTea

Real talk, though: Who says "a male child?" Say that you want a boy.

Leonardo DiCaprio truly was ahead of his time. By a few hundred years.

This is one of those times that you want to double check the spelling before you post. I'm pretty sure you would not like the smell of colon; regardless of who it belonged to.

This makes me wonder how they thought "Flaming Young" got its name. Was it on fire the first time they saw it?!

I assume their arthritis is flaring up, so they have to ask their personal assistant, Arthur, to continue writing for them. That makes perfect sense.

[Legit] I prefer to smoke hash browns from BoneAppleTea

If you smoke marinara, you can be my friend! I'd love to see your technique.

You've heard of the glass ceiling, but now we're back with an all-new type of ceiling. I call it: the Florida ceiling!

[LEGIT] No offense, but... from BoneAppleTea

This one is just delightful. I would find it impossible to be offended if someone wrote this in an email to me.

Do you ever feel overwhelmed by the number of aarons you have to run? This person knows your pain.

The hall of cost.

[LEGIT] It was an expensive hall! from BoneAppleTea

I understand that sentiment you're going for, here. But I think it might have been better received if you did just a little bit of research. Like, a single Google search.

[Legit] The 16th Precedent from BoneAppleTea

They've probably been talking about how much they hate you because you keep Tweeting about them. Poor grapes! Give them a break!

Is that when you eat something for the first time but could swear that you've had it before? I guess that could be irritating.

For meal your from BoneAppleTea

After the first "for meal your" I tried to give this person the benefit of the doubt. Then they repeated it.

On the bright side, your class is going to learn more about youth in Asia than they ever expected. But I wouldn't expect an A on this assignment.

The only thing I can imagine is a teacher doing awesome skateboard tricks while riding a coffin. And honestly? I think that would be pretty awesome.

Looks can be this evening.

[Legit] Quite deceiving indeed. from BoneAppleTea

It's so true. They can also be tomorrow evening! Mine was last night.

I don't know which chicken you asked for permission, but frankly, I'm pretty surprised that you got it. Are you sure you explained the concept correctly?

I'm pretty sure this is the mistake that the phrase "bless your heart" was invented for.

Well, I don't know about you, but  I'm going to be calling it Farmer John Cheese for the rest of my life. This is too cute not to adopt in my own life.

In a weird way, this one works. I might adopt this one too.

[Legit] Minus well from BoneAppleTea

Ah, well. It's a doggy dog world out there.

A feel day is similar to a field day, except rather than doing a bunch of sports, you sit in a circle and talk about your feelings. It's nice!

[Legit] he prob has a default skin from BoneAppleTea

Come on. Everyone knows it should be "waiter go."

Which garden did you want to eat in today? Oh, all of them? You got it!

[Legit] And please, be pacific... from BoneAppleTea

A birth specificate provides the same information as a birth certificate. It's just much more specific.

Is it soup made out of hands, or soup made specifically for hands? It makes a pretty big difference. Share this with someone who will get a kick out of these innocent mistakes!