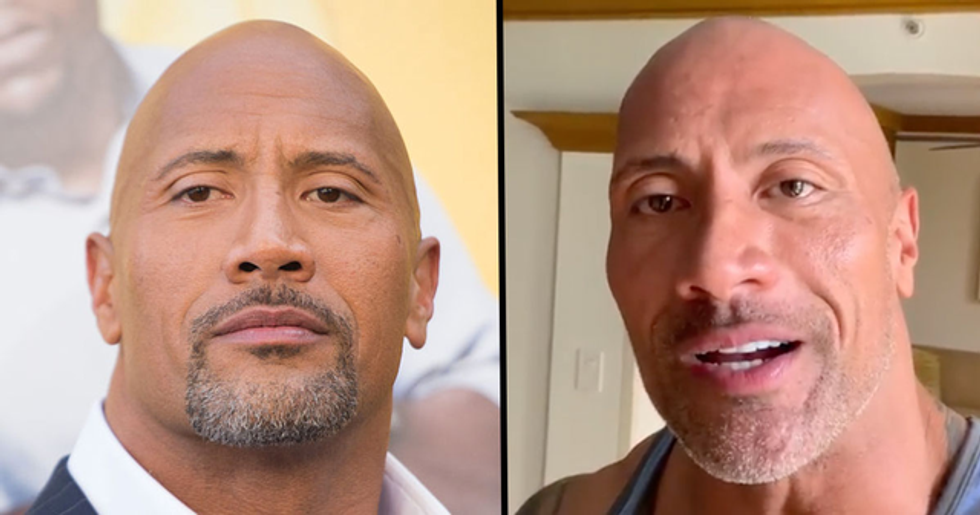 Dwayne "The Rock" Johnson has never been short of fans, whether because of his excellent wrestling career or enviable roles in blockbusting movies. He's also one of the most recognizable men in Hollywood thanks to his gigantic frame and distinctively expressive eyebrows.

But no one is immune to a public backlash, and Johnson has just become the latest celebrity victim. The star posted something on Instagram which has got a lot of people annoyed.

Many think Johnson has gone too far in terms of courting controversy with the image, though some are standing in support. Keep scrolling to see the photo that has caused his mass unfollowing...

This is where Johnson first earned his nickname "The Rock" - thanks to his giant (and seemingly impenetrable) ring presence. We certainly wouldn't want to face off against him!

With his general trash-talk and bullying persona, his wonderfully evil-looking eyebrow and his memorable catchphrase, "If you smell what The Rock is cooking," it seems he was made for the WWE.

For a long time, many have cited Johnson as one of the nicest guys in Hollywood - in stark contrast to his intimidating appearance and controversial wrestling reputation. But Johnson may just have undone all his hard work.

Because it seems like Johnson has annoyed a lot of fans...

He's posted something controversial on his social media which has got people riled up - so much so, that many are choosing to unfollow the star.

His Instagram (with the coveted handle, @therock) tends to be reserved as a place for him to share his workouts, which often garner literally millions of views.

He regularly keeps his fans updated...

Posting pics of his favorite food and drink, amongst workouts and his family life.

His role as a father is also a bit hit with fans.

Dwayne truly does deliver on the cutest content of his little ones. This adorable video shows The Rock embodying his Moana character amidst the pandemic.

But, as many have done before him, it seems Johnson has made a blunder.

Social media can be a real minefield in terms of the immediacy of interaction with fans and it seems that Johnson has learned this lesson to his detriment with a particularly controversial post.

And it seems it was the message behind the image that many have found objectionable.

In the comments, people really didn't hold back...

Many responded in a shocking way...

Many viewed it as hugely inappropriate in light of recent events of mass violence.

Many view the caption in particular as in very poor taste.

A quick read through the comments shows that many are super disappointed in Johnson for his comments.

So, it's safe to say the post hasn't done Johnson any favors.

Many think his casual, jokey language surrounding such a serious issue to show a lack of respect and poor judgement.

However, some have taken a different view.

Many see the uproar over Johnson's post as a victory for the "snowflakes" of the world, who are keen to get offended by anything that they possibly can.

In fact, some see the outrage as all-out overstated.

It's true that commenting about unfollowing takes a lot more energy than just quietly unfollowing an account that you've found a disagreement with. But then, how would anyone ever know who they are offending?

Some have pointed out another interesting aspect of the story.

The general noise about the unfollowing seems to have been bigger than the actual acts of unfollowing itself. It seems like many just wanted to throw their voices into the mix, rather than actually follow through.

So, as for whether the outrage is as big as it initially seemed?

It's safe to say: probably not.

"I'm sending a salute of respect & gratitude to the Blackhawk Squadron 🇺🇸 1st Armored Division for the honor of naming their tank (the most advanced in the world) Dwayne 'The Rock' Johnson," he wrote. "Heavy-duty, bada*s, sexy AF and built to take care of business 😉 — but most importantly, thank you all for your service. Grateful to the bone." What do you think?

In spite of the follower backlash and negative reports on his post, it's still up - although Johnson is yet to comment on the story as a whole.

It seems all is well in the world of The Rock.

And since everyone is entitled to their own opinion, we guess Johnson should be allowed to post what he likes. If you don't like it, you can always unfollow - and you don't even have to leave a comment first!