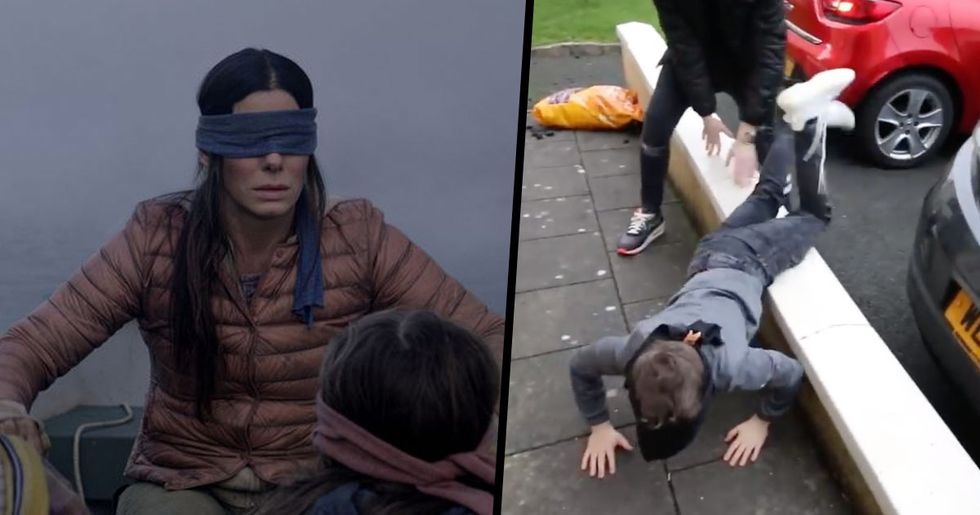 People Are Walking Around Blindfolded Doing The Bird Box Challenge

If you're a fan of horror movies, or keep up to date with Netflix's new releases, it's likely you'll have heard about the release of Bird Box. The freaky thriller stars Sandra Bullock and tells the story of a post-apocalyptic future. In it, the family must run away from a mysterious entity which attacks you through your vision. It's been a huge success, with largely positive reviews and a ton of attention on social media. This movie is the definition of weird and wonderful.

Not so wonderful, however, is the newly conceived "Bird Box Challenge." In the movie, characters have to blindfold themselves in order to avoid being caught by the mysterious entities. So naturally, people have taken this to mean they too should be attempting to go about their lives while blindfolded. Sound crazy? Well, it kind of is. But more than that, it's dangerous, too.

Sandra Bullock is one of Hollywood's biggest movie stars.

She's starred in classic such as Miss Congeniality, Speed, Gravity and The Heat, and frequently tops lists of the highest paid and most famous actresses working today.

Her latest vehicle is the apocalyptic thriller, Bird Box.

The movie was released on Netflix just before Christmas, on December 14th. It tells the story of a woman and her two children trying to escape some mysterious entities, who, when seen, cause victims to die by suicide.

The method of escape is pretty distinctive.

As you can see from this Bird Box poster, blindfolds are the method of defence against the entities. If you can't see them, they can't hurt you - and thus, Bullock spends a good portion of the film donning an eye-covering scarf.

It's all pretty nerve-wracking stuff.

The blindfolds work excellently as a plot device, as they hugely exacerbate the feeling of helplessness and vulnerability experienced by our protagonists.

If you've ever been blindfolded, you'll know how oddly creepy the feeling is.

Not being able to see is a pretty horrifying feeling - particularly if there are some known entities out to get you by any means necessary.

As with many of the latest Netflix releases, it was an instant hit.

You just need to check Twitter to see how huge Bird Box's impact has been. You know what they say, as soon as something becomes a meme, you know it's a classic, right?

Some of the memes are pretty funny.

Our personal favourite? This Bird Box and Ratatouille crossover.

Although some of the memes are a little more emotional.

It's clear that Bird Box has a story which touches viewers' hearts at its core - even though it's buried under many super-scary blindfolded sequences.

But there's another meme which Bird Box is responsible for.

It's called the "Bird Box Challenge," and involves people trying to go about their daily business, all while blindfolded.

This was our initial reaction.

Sure, it makes for a great plot device in a movie! But why on earth does that have to mean people actually trying it out in real life, and for no good reason?

Some of these challenges have got a little creative.

For example, YouTuber Stephanie Soo, who tried six different types of takeout fries, all while wearing her Bird Box blindfold.

That one was kind of funny and inventive. But maybe we're just biased because Soo didn't end up actually injuring herself?

Unlike in this Bird Box challenge.

Here, a bunch of men walking around New York City blindfolded, and the results are ... exactly as you'd expect.

Watch to the end to see what we mean.

Falling down a flight of subway stairs may be funny, but we're guessing this guy's injuries are actually no joke.

Don't even get us started on this one!

If you're squeamish, we don't recommend watching this video. Do we really need to say that blindfolding you're toddler and running around is a recipe for disaster?

This has officially gone too far!

It's one thing injuring yourself, but putting your kids in danger for the sake of going viral seems just a little bit sick.

The trend garnered so much attention that Netflix had to make an official statement.

In it, they seem a little incredulous as to the fact the Bird Box challenge exists at all - and they firmly state that no one should be blindfolding themselves for the sake of a meme.

It may be stating the obvious, but we quite agree.

Life can be difficult enough without people deliberately making things trickier for themselves for the sake of five minutes of internet fame.

But if you think about it, it's very odd to consider the lengths people will go to for a "challenge."

Some thought Netflix were being a little overprotective.

Though they had a perfect (and pretty cute) response to these claims.

It's nice to know that someone cares!

Although we're not sure if the people blindfolding themselves for an internet challenge may actually be beyond help.

They claimed people suffering injuries due to blindfolding themselves was just an updated form of "natural selection."

Even if it's a little mean, we couldn't help but laugh. And if these people are filming and broadcasting their escapades, surely they waive the right to not be laughed at online, right?

Some Twitter users pointed out the strange familiarity of the Bird Box challenge.

This time last year, teenagers were eating Tide Laundry pods online in the hopes of getting some internet fame.

The challenge went so far that Tide had to make their own statement.

They even brought in NFL star Rob Gronkowski, in the hopes of dissuading teens from eating the potentially toxic laundry detergent.

What is it about New Years that encourages people to attempt dangerous challenges?

Sure, it's sad that Christmas is over, but that's no reason to start attempting anything overtly dangerous - even in the name of humor!

One Twitter user pointed out that this trend goes further back than you may think.

He cites "challenges" going as far back as 2000. What's a little disconcerting, though, is how these challenges appear to be getting more and more dangerous.

Although we absolutely don't condone the Bird Box challenge, there have been some funny responses.

We know Spongebob would have kill the Birdbox Challenge. that’s the only way he know how to drive #BirdBoxChallenge https://t.co/rFXSKIf4eZ
— Keion Cage (@Keion Cage)1545701125.0

Instead of undertaking the blindfolding themselves, some Twitter users have been finding other moments from pop culture which seem to fit into the movie.

One of our favourites is this Jackass crossover.

Idk why y’all think you created the bird box challenge when my guy @realjknoxville did it back in 06 https://t.co/UiGb8xlBZB
— AramHodoyan (@AramHodoyan)1546204751.0

Although, needless to say, this stunt is perhaps even more dangerous than the regular Bird Box challenge. Trying to go about everyday tasks is one thing, but walking blindly into a bull's pen is quite another.

So let's leave the blindfolds in the movies, shall we?

We highly recommend you watch Bird Box, but we highly discourage the Bird Box (and, while we're at it, any other) challenge. Stay safe out there!