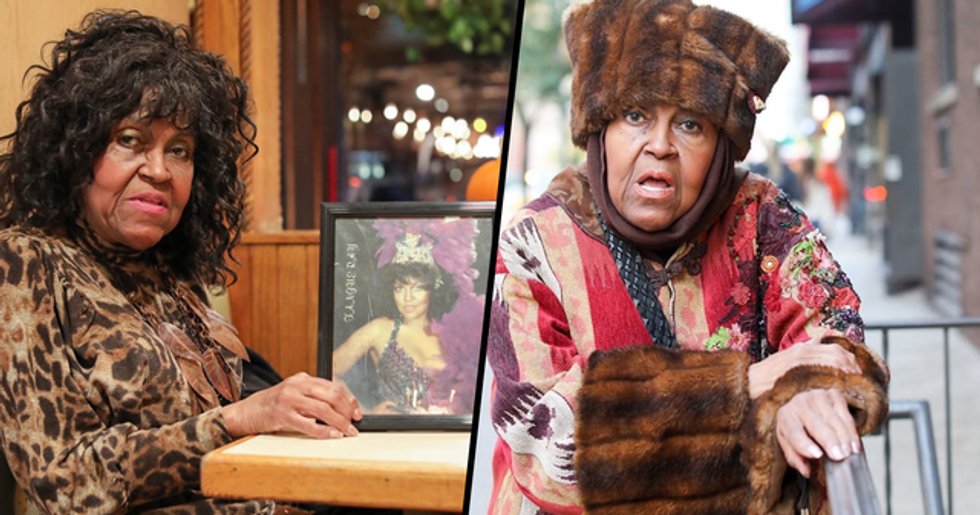 In terms of internet content, Humans of New York is hard to beat. Well, you could probably expect that the most interesting and diverse city on earth would produce some truly fascinating humans. But their latest engrossing Instagram feed may be the best yet.

A woman known only as Tanqueray has shared her life story - and it's not one to be missed. In fact, people are so obsessed with this iconic character's life story, there have been calls for it to be turned into a screenplay. And once you read it, you'll see why.

New York is a city unlike any other.

And so it stands to reason that the Big Apple would contain some of the weirdest and most wonderful inhabitants.

And one photographer was inspired by this incredible city.

This is Brandon Stanton, an NYC-based photographer who decided he wanted to document what made his city great: the people. He launched Humans of New York in 2010, and it was an immediate internet success.

And it's not hard to see why - the account is filled with stunning portraits and amazing captions.

"I’m going to find a job, goddamnit. Nobody is going to force me into retirement at 61. I moved to New York at the age of 35 with nothing but $1000 and a cat. I’ve reinvented myself once. And I can do it again."

And some really give you an insight into the variety of human experience.

"I’m sixty-two now. I have three more years. I sold heroin. A lot of it. I had forty people working for me. If you were to ask me thirty-four years ago what it was going to be like in prison, I couldn’t have imagined. It’s been the same thing every day. Everyone I care about is gone. My mother passed. My father passed. My brother and sister. If I look backwards, I’ll lose my mind. I just try to keep busy and take it one day at a time."

Well, it might just be the most shocking one yet.

It tells one hell of a story.

And people of the internet can't get enough.

The story belongs to a woman known only as Tanqueray.

And, boy oh boy, has she lived a long and fascinating life. We're just glad she shared her tales with us!

So, let's start at the beginning, shall we?

"My mom threw me out of the house at seventeen for getting pregnant, then had me arrested when I tried to get my clothes. Then she f***ed the head of parole to try to keep me in jail. She was some prime pussy back then."

But things just get crazier from there.

"The warden did some tests on me and found out I was smart, so I got a scholarship to go anywhere in New York."

She chose the Fashion Institute of Technology ...

"Which I hated," Tanqueray adds. But while there, she learned the dressmaking skills which would change her life.

And Tanqueray put these skills to good use.

"All my friends were gay people, because they never judged me."

"All I did was gay bars: drag queen contests, Crisco Disco, I loved the whole scene."

"And I couldn’t get enough of the costumes."

"My friend Paris used to sit at the bar and sell stolen clothes from Bergdorf and Lord and Taylors, back before they had sensor tags. So I had the best wardrobe: mink coats, 5-inch heels, stockings with seams up the back."

"One night a Hasidic rabbi tried to pick me up because he thought I was a tranny. I had to tell him: 'Baby, this is real fish!'"

"My stripper name was Tanqueray."

"Back in the seventies, I was the only black girl making white girl money."

"I danced in so many mob clubs that I learned Italian."

"Black girls weren’t even allowed in some of these places. Nothing but guidos with their pinky rings and the one long fingernail they used for [drugs]."

Unbelievable, her story only gets more bizarre from here.

"I even did a full twenty minutes in the place they filmed Saturday Night Fever."

"But I made my real money on the road."

"Three grand on some trips. Every time Fort Dix had their payday, they’d bring me in as a feature and call me ‘Ms. Black Universe’ or some shit like that."

And it's clear what Tanquery was getting paid for.

There were pretty severe punishments for overstepping these types of boundaries.

"In fact, one night after a show, I caught another dancer sneaking off to the Tate Hotel with our biggest tipper. Not allowed. So the next night we put a little itching powder in her G-string."

"Boy did she put on a show that night."

"Didn’t see her again until The Longest Yard with Burt Reynolds. So I guess she finally fucked the right one."

"The scene was different back then."

"All the adult clubs were mob-controlled. It all flowed up to some guy named Matty The Horse. Honestly, the mob guys never bothered me. They were cool, and I liked how they dressed. They wore custom made suits."

"And they went to hair stylists, not barbers."

"These guys wouldn’t even let you touch their hair when you were f***ing them."

She also shares an experience that sounds straight out of a movie.

"I took a job from this woman named Madame Blanche. She controlled all the high dollar prostitutes back then. She was like the Internet-- could get you anything you wanted. And all the powerful men came to her because she never talked. She set me up with a department store magnate who wanted a black girl dressed like a maid. I thought I could do it. But when I got to his hotel room, he wanted to spank me with a real belt. So that was it for me. I was done."

"But Madame Blanche set my best friend Vicki up with The President every time he came to New York."

"And don’t you dare write his name cause I can’t afford the lawyers. But he’d always spend an hour with her."

And here's where Tanqueray dropped her juiciest tidbit.

"He’d send a car to pick her up, bring her to his hotel room, put a Secret Service agent in front of the door, and get this: all he ever did was eat her *****!"

Understandably, the posts have gained a lot of attention.

The comments section is flooded with people shocked and fascinated by Tanqueray's amazing life.

Based on just these posts...

We can only assume Tanqueray has a ton more of these unbelievable tales. Which has led fans to ask for one thing.

They want Tanqueray's life to be turned into a TV series.

No word as yet if any networks have picked up on this - but our hopes are high. We'd be tuning in for sure.  Hungry for more weird life stories? Scroll on for the weirdest recorded ways people have died. We promise it's far more hilarious than it sounds!