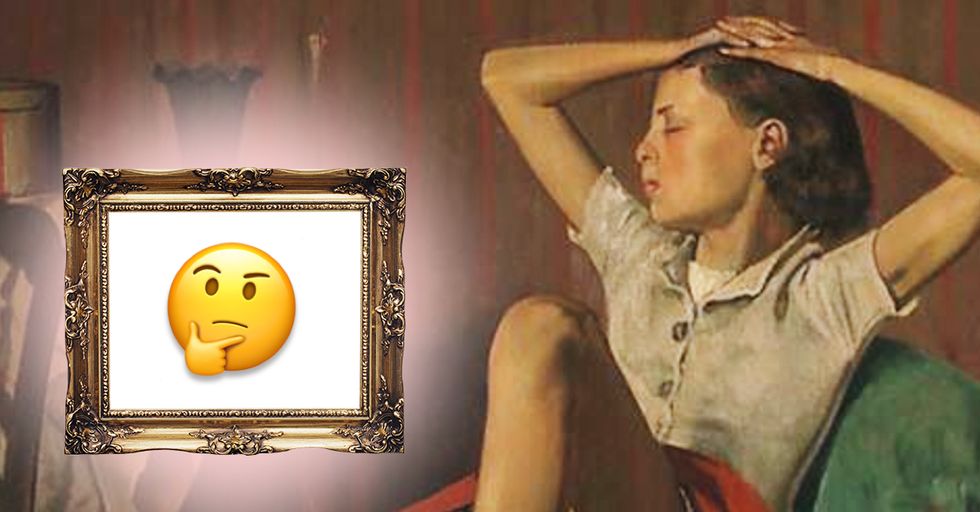 Art is important. It's what sets us apart from the rest of the creatures on the planet. (Which is good, because there are some other behaviors we participate in that are pretty downright barbaric). We encourage children to express themselves through crayon drawings and macaroni masterpieces. We even create public building full of art in the hopes of preserving our history and encouraging others to create their own marks.

But how should we react when art challenges us? That's what we're exploring in today's story about a work of art found in the Met.

On a recent trip to the Met, Mia Merrill came across a painting she found offensive.

I put together a petition asking the Met to take down a piece of art that is undeniably romanticizing the sexualiza… https://t.co/UlW9X5c7Eb
— Mia Merrill (@Mia Merrill)1512079077.0

She felt that the painting sexualized a young girl and that in today's climate, there's no place for that in the art world. She started a petition asking the Met to consider removing the painting from public view.

The painting is called "Thérèse Dreaming" and it's by the artist Balthus. Here it is:

As you can see, the painting does depict a young girl in what some might call a suggestive pose. It's not impossible to see why Merrill found the painting questionable.

Many people think Merrill's attempts to get the painting hidden away are ridiculous.

There's certainly the "slippery slope" argument to consider. If we censor this painting, what else do we need to censor? Could we reach a point in the future where there is no art left in the museums?

Is there possibly another way to approach the issue?

Obviously, we can't get to a point where we keep all controversial items from ever seeing the light of day. That would be a huge step back in the progress we've made as humans who create amazing things.

You also can't assume that just because something rubs you the wrong way, others are also bothered by it.

@miazmerrill Please don't burn books or art. It isn't up to you to ban what I might want to see and find different… https://t.co/sxYKKXEmU2
— Vicki Halliday (@Vicki Halliday)1512433432.0

Whose job is it to make these decisions? Surely we can't just put one person in making the call, right? On the other hand...

This painting in particular was created by someone who tended to depict pubescent girls in similarly suggestive poses.

@TodayZen Is it not highly unethical for a middle-aged man to orchestrate portraits that place children in adult se… https://t.co/sn2CK2BniH
— Mia Merrill (@Mia Merrill)1512484449.0

Balthus is well-known for his erotically-charged paintings of young girls. Is that really something we want to encourage others to emulate? If victims of sexual predators happen to visit an art museum, should they have to worry about being confronted with art like this?

You may have learned from your college professor that "the author is dead." ...But is the author really dead if we're still celebrating their work?

But some art is made specifically to make people uncomfortable.

@miazmerrill By “simply asking” The Met to remove a painting that makes you feel “shocked” and uncomfortable, you a… https://t.co/qZOm2Ia5iS
— Dave Miranda (@Dave Miranda)1512385076.0

And this painting certainly accomplishes that. Have we gotten too soft as a society? Or are we now just more aware of the damaging effects this sort of art can have?

Controversies in the art world are intense and difficult.

But these are also such important conversations to have. Besides creating art in the first place, actually discussing those pieces is yet another thing that sets us apart from animals. As of right now, the Met has refused to remove the painting from its halls.

This entire controversy has certainly given us a lot to think about.

(See what we did there?) What do you think? Is context important to understanding a work of art, or does it stand on its own merits? Do you think the Met made the right call? Let us know!