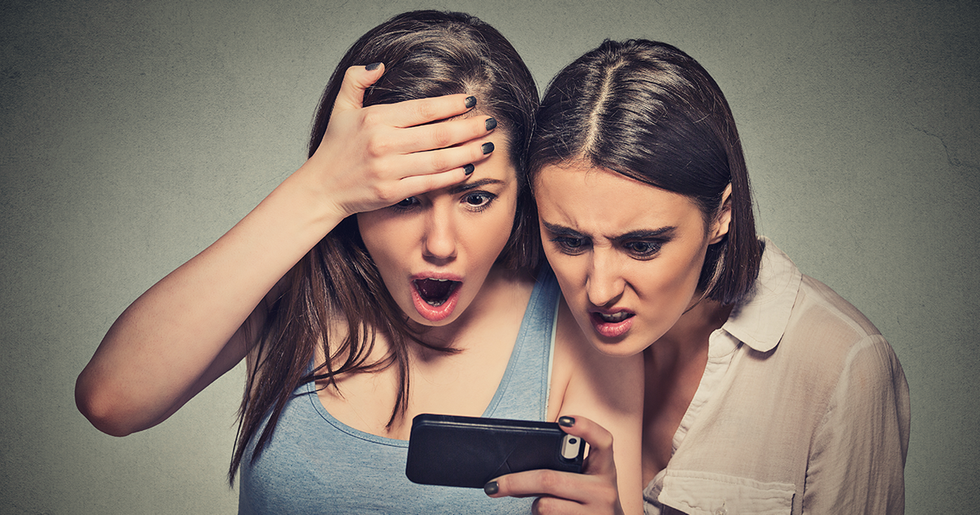 People Who Honestly Just Want to Watch the World Burn

But some people? They just want to watch the world burn. Some people flaunt their distaste for rules. They make a show about how they don't care what anyone around them thinks — they act the way they want to act, not the way they've been told to act.

And that should terrify us all to our core.

Best case, these agents of chaos can help us reevaluate our societal conventions, to see if they can be improved. Worst case, these maniacs will mess up our minds and freak us right the hell out.

Or maybe it'll be somewhere in the middle, and we'll st be kind of vaguely amused by these madlads' antics.

Here are some of the best posts from the /r/MadLads subreddit. Be prepared to be shocked by their audacity and wish to watch the world burn.

Yesterday I told my nephew I'm not allowed to eat popsicles (because my sister doesn't want him eating junk and he copies me). So he pulls me into the bathroom, slams the door and whispers, "Ssshhhhh, I got us both popsicles but we need to eat them in here so my mom doesn't find out." - GallowBoob

My bike was stolen last week and yesterday I saw it for sale on Craigslist. So I messaged the seller, met him at McDonald's and when I noticed it was 100 percent my bike, I dumbly asked to take it for a ride. He said, "Yeah just don't ride off." Which is exactly what I did. I stole my bike back. - dillonwithab

The egg versus the Jenner.

Upset that a post about Kylie Jenner's baby had the most likes in Instagram history, this guy decided to claim the title with nothing more than a picture of an egg.

The man who Rick Rolled the internet.

Say the opposite of these words: 1) Always. 2) Coming. 3) From. 4) Take. 5) Me. 6) Down. The head moderator of the subreddit replied: I don't get it, so I don't know if I should remove this. And then, the original poster revealed his scheme: OMG I RICK-ROLLED THE HEAD MODERATOR I AM A GOD.

I bet a lot of police are actually party animals.

Cops probably don't get invited to any parties. It's not like we're all experts on the law, who knows what we might accidentally do that's illegal.

Somebody remind me in seven years not to have kids. And then, exactly seven years later, another Redditor responded: Don't have kids. When a third person asked why they'd do this, they simply responded: A commitment to public service. - willflameboy

An excellent builder and an even better sister.

One time I accidentally deleted my little sister's Minecraft world (she had built her dream house) so I downloaded a "Modern Minecraft Mansion" off the internet and told her that I stayed up all night building her a new house and she believed me. - TheSilentPro

Is this guy crazy or a genius?

I skied back to the pole again to take this photo for all the men who commented, "Make me a sandwich" on my TEDX Talk. I made you a sandwich (ham & cheese), now ski 37 days and 600km to the South Pole and you can eat it." - 16-year-old Australian explorer Jade Hameister

Um, I think this person is actually a genius.

I named my dog 10 Miles so I can tell people I walk 10 Miles every day. - EmojiPNG

In a tweet to National Geographic, one Twitter user said: Can you please follow me back so I can DM you? I've got some new research that is going to blow your mind! And when the well-respected nature magazine National Geographic, he said: Ducks don't actually float. Their legs are so long that they are able to walk on the river bed. He was blocked.

My teacher did one of those word cloud things with a virtual response thing for the question, "What makes water so special?" I submitted the word "wet" 600 times and it made... this. - bbbcsgalcm

I may need to buy this game. Oh wait, I need money to exchange for goods and services... And another Redditor responded: Check your PMs. ;) A third Redditor hopped in: Did you just... OP please confirm. And then, OP came back: He just said to get a job, lol - ImASleepyBear

That's how you're gonna win.

Redditor 1: If there was a worldwide game of Hide & Seek, where would you hide? Redditor 2: Not tellin you. - timmie_tams

Our target: the hospital.

My mom is anti-vaxxer and I just turned 15. This is a testament to how misunderstood vaccinations are and how you don't die without them provided your dad sneaks you to the hospital in the middle of the night when you're one year old. Yes, her name is Karen. - DeeGeeZ

Redditor 1: You can have sex with one real person from all of human history — who is your ultimate lay? Redditor 2: I'd like to have sex one more time with my wife who passed away from cancer nine years ago. My body yearns for hers. The ultimate downside to finding "the one" is she may die young and leave you wanting. Redditor 3: I also choose this guy's dead wife. - Raizel71

Abide a few rules, break a few rules. It all comes out even in the end.

It's technically a crime to break in to a place, even if what you do in there is exactly what you would do when it's open. Still, it's pretty mad not to just go to a 24 hour gas station.

That is going to piss off some digital marketers. But they can't be mad — it is spam. That's just a fact.

Youtuber Jonathan Stevens left this comment on a video: this is my first comment ever on YouTube. You guys should feel honored. Another Youtuber shot back with: And who the f*ck are you? And Jonathan Stevens said: Jonathan Stevens. It says it right there you illiterate f*ck. - GallowBoob

Let me get that medium rare.

Back in high school this one kid and I hated each other. One day he randomly gave me a $25 gift card to Texas Roadhouse. I was like, "Wow okay, maybe you're not so bad." I go to Texas Roadhouse and eat a $25 meal only to find out he put $1 on the card and wrote $25 on it. - meforbleach

It's best to meet the family early in the relationship.

There's a girl in front of me on the bus having a full FaceTime call out loud with her parents so I put my face in the camera and said, "Honey, I had no idea I was meeting your parents today." I will enter your personal life if you enter my personal space. - nthensome

There have to be closer stores.

Obviously, you want to be there for your friends, but here? I think the victim of this guy is actually Kyle. Just send your boy to Ralph's, Kyle.

Redditor 1: your future self is talking sh*t about you. Redditor 2: Joke's on him. I'll f*cking ruin his life. - WouterKabauter

But what I really love are the portions!

A man from China bought a first-class ticket which came with access to a VIP lounge that had free food. He rescheduled over 300 times in a year to enjoy over 300 free meals. When investigated, it was found that after eating he would change his reservation to a later date. He finally canceled his ticket and got a full refund. - nvalenti27

Take a gorilla, put it inside a fake-looking gorilla costume, and set it loose inside a shopping mall. - sarsfox

Is this what poking was for?

A man named Brian Best friend requested a man named Brian Worst on Facebook. Six years later, the other Brian finally accepted. Then, First Brian tweeted: Friend request had been idling in his inbox for like six years, but alas, I am finally able to conduct the sickest burn in American history. They will turn today into a holiday. What did Brian Best write on the timeline of Brian Worst? "suck itttttttttttt." - rgauci5800

It's her summer break so I woke my 12-year-old daughter up at 5:15 this morning. I've been waiting for this revenge since she was 4. When she asked me why I was up I told her my blanket fell off the bed. - Thedaveabides98

It is imperative that you guess.

Mom: Guess what? Guy: What? Mom: No, you have to guess. Guy: I don't know?? Mom: Grandma in the hospital. Guy: Why would you make me guess that? - Liteboyy