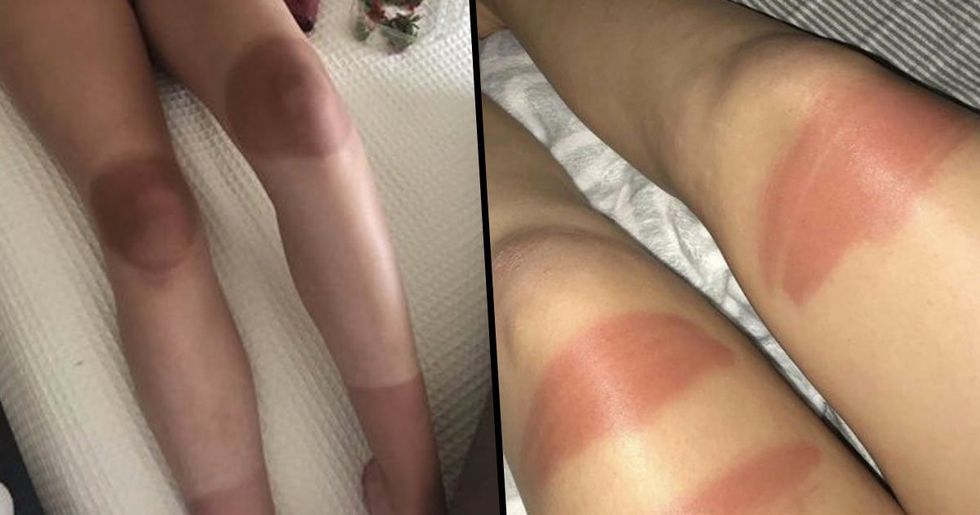 People around the world are prone to getting a little overexcited about the warmer temperatures. For people who spend months of the year shivering and wrapped in layers of clothes, the sight of some sunshine can be enough to drive them to near hysteria. But sunshine is a cruel mistress and can be particularly tough on those who aren't used to it - as these people learned to their detriment.

The only thing worse than getting a sunburn? Getting a really awkwardly-shaped sunburn because of a poor choice of clothing. Want to experience some true schadenfreude? Get scrolling.

Summer truly is the best time of the year.

The fact that after what seems like an endless, gray winter, we finally get to experience warmth and brightness always has an uplifting effect on our moods.

But summer comes with a few caveats.

One of the most prevalent? The double-edged sword that is the sun. Because, while it's lovely to experience summer weather, that ball of fire in the sky can also be pretty dangerous.

Because overexposure to the sun can have a pretty painful impact.

The rays of light traveling through space can cause a surprisingly intense reaction upon contact with the skin.

When it happens to someone else, it can be pretty funny.

But when you're the one suffering from the painful after-effects of an over-effusive sunbathing session? Well, that's a rather unique sort of misery.

And there are certain things that can make a sunburn even worse.

While summertime tends to present a unique opportunity to show off your most revealing outfits, you need to be careful about what you wear - particularly if you have a propensity to burn.

But there's one item of clothing that's a real nightmare in warmer weather.

Ripped jeans have had a real fashion moment of late - but some are learning that they aren't the best choice for every occasion.

For one particular reason.

Getting sunburnt through a pair of ripped jeans is truly no fun at all.

You may think that you don't need sunscreen, since you're wearing pants.

But you'd be very wrong, as these pictures prove.

The places that your jeans did manage to protect serve as a reminder of what color your legs used to be - really highlighting the contrast.

The more intricate the rips, the worse the burn-pattern.

Even if your pants are basically full coverage.

It almost looks weirder when you have just a few small strips of burn on an otherwise unblemished leg.

Some of these look positively painful.

#tbt to when Jen wore ripped jeans in the sun and got burned where the holes were pic.twitter.com/5SwWU4F6pr
— Josh Knight (@THE_joshknight) March 27, 2014

Like, for example, this burn, which looks almost radioactive.

Even if you don't exactly burn...

The contrast of skin tones is pretty alarming. This image almost looks as if she's wearing a pair of kneeless, pale-beige leggings, right?

Although, we have to say, it's the super red burns that really stand out.

We can almost feel how painful this one is. We do not envy this guy - at all.

You might think that the after-effects just last a day.

But you'd be wrong. As the burn fades to tan, the residual shadow of the ripped jeans continues to show up with total clarity.

And if you continue with your jean-wearing ways?

Well, then you're prone to creating a really weird collage of tan, burn, and pale skin on your legs.

And it's not just fair-skinned people who fall victim.

Lesson learned: Mexican/Italians should not wear ripped jeans in the sun. I look like Tony the tiger http://t.co/rlyWYuhH
— Mandy Monge (@Mandy Monge)1332806688.0

If you're prone to your skin tone changing in the sun, you too could fall victim to this phenomenon.

Even if you try to style it out...

One early-summer mistake can give your legs a strange look that'll last until the holiday season.

Sure, these pictures are kind of funny.

But they also look incredibly painful - both physically and emotionally. And, on top of that, sunburn is actually pretty dangerous, too.

So if you do insist on wearing ripped jeans in the sun...

You better be prepared to load up on the sunscreen. And, while you're at it, apply it to the rest of your body, too!