These People Can't Cook Even Using the Microwave | 22 Words 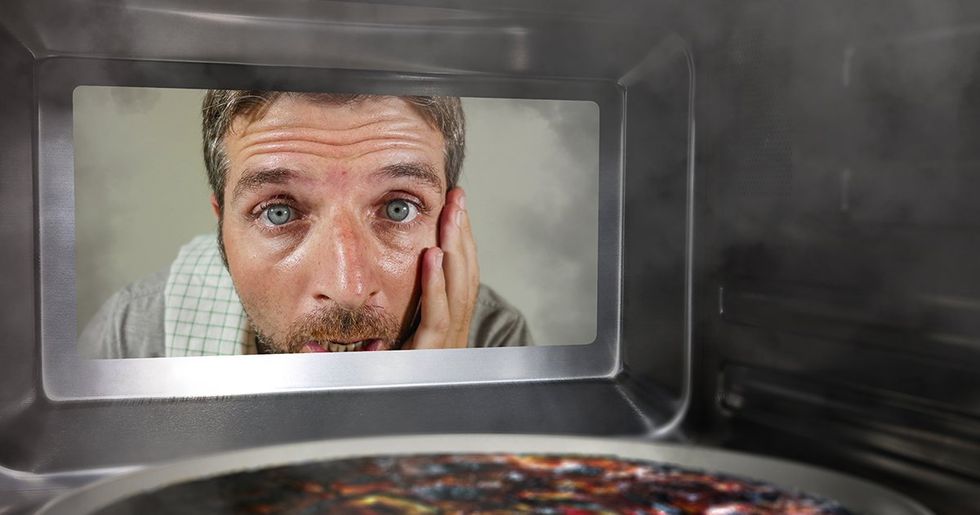 These People Can't Cook Even Using the Microwave

OK, confession time. Here it is... Are you ready? Here is my confession: I did not grow up with a microwave. I did not learn to use one until college. And even though I now have one in my home, it still frightens and confuses me.

I don't know why we didn't have a microwave. Maybe my mom was afraid of the waves invading our bodies and causing cancer. Maybe it was just because we had a toaster oven and a real oven and a stove and so we could pretty much heat up anything if we needed to. I don't know. What I do know is that for 18 years of my life, I did not use a microwave, and then suddenly, I lived in a dorm, and I had to figure them out. And folks, it has taken me a long time! Microwaves are confusing. All the different buttons basically mean nothing! Sometimes if you leave something in for two minutes instead of one, it explodes, and other times, it's still frozen in the middle. Microwaves are the devil! There, I said it.

If this is you and microwaves, never fear.

I mean, fear a little bit, like, just enough to run and put the fire out, but then stop fearing. You are not alone.

If they were like, "Go ahead! Get as close as you want for as long as you want!" I wouldn't want to. But because it's bad for you, I want to do it.

How about a microwave that heats the food instead of the plate?
— Kalvonavirus (@Kalvonavirus)1469378177.0

What an idea! Get this personal a Nobel Peace Prize. I can't even imagine living in a world of such luxury.

People hate when coworkers heat up fish in the office microwave. But to me, it just smells fishy. Not pleasant, but there's nothing extra bad about the microwave fish smell. Am I missing something?

Well I just set my microwave on fire so that's how my day's going pic.twitter.com/A4AVKVRmwq

Here's a little cooking tip: If you set your microwave on fire, your first move shouldn't be to take a picture of it. Put that fire out!

Easy Mac doesn't seem so easy anymore, does it? That's like, a whole four minutes of work! It's unconscionable.

What if you fell in love with someone and discovered they microwave hot drinks when they get cold. Like you're just… https://t.co/XXXhSOEHK6
— Bolu Babalola (@Bolu Babalola)1529435469.0

She's so right. I cannot put it into words, but it is so disturbing to think of someone doing this. Just toss it, buddy!

It is impossible to soften butter in the microwave. It's 2019; you'd think they'd have figured this out by now. But no.

There are three certainties in life: death, taxes, and no matter what you cook in there your microwave smells like hotdogs.
— Abbi Crutchfield (@Abbi Crutchfield)1516630331.0

This is so true. And I have, I believe, never once cooked a hotdog in my microwave. But it still smells like a meat log.

Aw, how sweet! This girl will grow up around microwaves so she won't get to college and ask her roommate, "How long should I microwave ice cream to soften it up? Like a minute?" Which is a thing I did.

Some bowls are not microwave-safe and this is exactly why you should confirm before you nuke it.

Cooling down for cowards

Letting stuff sit in the microwave to cool down or “finish cooking” is for cowards.
— Jeff Gerstmann (@Jeff Gerstmann)1553440157.0

If you won't reach in with your bare hands to handle the scorching hot Lean Cuisine, you are a coward, sir.

Cold in the middle

Wow. Yeah. I get this. Unfortunately. My food is cold in the middle, and now, my heart is too.

I mean, seriously, this is 2019. Microwaves are microwaves. None of them work properly. Everything is terrible.

What the food sees

This is great for this person, but I never look that excited when my microwaved food is ready. Unless it's popcorn. I love popcorn.

When your microwave demands a sacrifice. pic.twitter.com/d2OrWRvGLM

And this should summarize my cooking abilities... #microwavedisaster http://t.co/Eg7AHoNEeq
— Laura Hettiger (@Laura Hettiger)1427273893.0

What is that?! Is it oatmeal? Hummus? Baby puke? It could honestly be any of these and I wouldn't be the least bit surprised.

How do you accidentally nuke a cake for five minutes instead of 30 seconds? That's way too long!

If you have ever heated up some water in the microwave and then completely forgotten about it for the next seven days, this tweet is for you.

next time you go over to a girls/boys house look in her microwave and under her toilet seat, that’ll tell you all you need to know

You can tell a lot about a person by how clean their microwave is. If it's super gross, get out of there before it's too late.

So I guess it's not microwaveable safe... Veggies were still good though. #microwavefail http://t.co/CDknqhm
— Marissa Bailey (@Marissa Bailey)1315450310.0

Nooooo! Oh my goodness, I would not eat those veggies. Something happened to that plastic. That broccoli is probably full of toxic chemicals.

But really, this is unacceptable! This is like, the one task that a microwave would be really great for, and it can't even get it right.

I have never seen a sadder-looking potato. It looks like a burnt hoagie roll. This is what microwaves do to food. It's terrible.

My 7yo called me up. Tells me that she made me a brownie at school today and that it was in the microwave for me to… https://t.co/QD2UdLEvo2
— Christopher Koentz (@Christopher Koentz)1554168614.0

What a cruel and perfect joke, and I'm jealous of this 7-year-old's comedic skills. Also, now I really want a brownie.

Why would you ever warm up cat food in a microwave?! Your cat would eat a raw, dead mouse. His Fancy Feast can be room temperature.

Yeah, there's metal in those things. But now a warm bra sounds like a perfect idea. Share this with someone who knows the struggle is real.