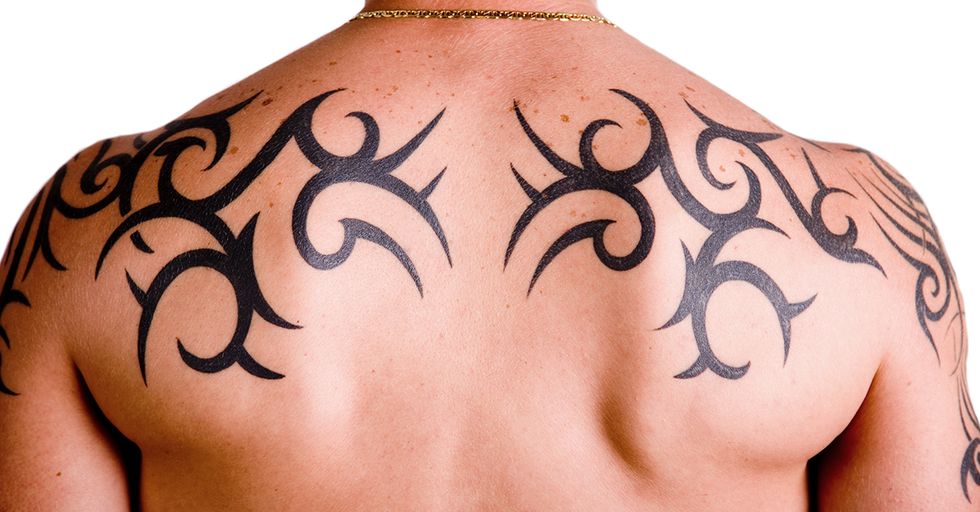 Tattoos: whether you love them or hate them, no one can deny that they are definitely here to stay. About 25% of people in America have at least one tattoo. And while tattoos can be a great way to display your individuality, there's also no denying that tattoo trends are definitely a thing.

Tattoos of a heart with the word "Mom" in it were once so popular that they became a regular feature of pretty much any tough-looking cartoon character. In the 90s, every girl dreamed of a butterfly lower back tattoo and every guy dreamed of barbed wire snaking around their arm. In the early 2000s, it was tribal everything.

But maybe no tattoo was quite as popular as the infinity symbol. The infinity symbol, a sideways figure eight that indicates, in mathematical terms, that something goes on forever, was probably the most popular tattoo of the 2010s. It's pretty, delicate, easy to hide, and somewhat meaningful. (Although, to be honest, I'm not exactly sure what people mean by it? That they will live forever? That they love math?)

This tweet from a woman named Kate about infinity tattoos recently went viral.

Around 2014 every girl you knew was contemplating getting one, and honestly probably some dudes, too. It wasn't the tattoos themselves that were so bad (confession: I still think they're kind of pretty) but the saturation. A tattoo loses meaning when everyone and their wacky aunt has one.

Some infinity-tattooed girls responded to the tweet, to give a little update.

They reported back that things are good.

Some were very honest about their situation.

But at least they are doing well.

Some say they haven't changed.

And they're proud to be basic.

But some people have had it with the infinity tattoo.

And they are taking drastic measures.

Should we check on the anchor-tattooed girls, too?

What about people with dandelion tattoos?

Look, sometimes we all get caught up in the trend of the moment! No judgment! I bought Crocs AND those running shoes with the toes.

One person even admitted she had both versions of the tattoo in one!

But she still likes her tattoo, thank you very much.

One person even admitted she got the infinity tattoo in 2018!

You do you, girl.

But all the trendy tattoo talk got us thinking: what other tattoos do people regret getting?

So we scoured the Internet for answers.

Turns out, he needs a backup plan for getting this tattoo removed.

After high school, my father asked me what I wanted to do with my life, and I said music. he told me I should go to college just to have a backup plan. well, angst-filled teenage punk rock me didn't like that idea. I got the words "no backup plan" tattooed down my right index finger. at the time I was thinking that if I had a tattoo in a spot that would make regular employment more difficult it would motivate me to work harder towards making music my career. 12 years later, I've got this faded, blown out the lettering on my hand, and a job as a bartender. I guess I really showed my dad! -AndrewGoon

I was 16 and worked with an 18-year-old at the local cafe. She calls me and says she has buddies in town that do tattoos and that I could come over and get one if I wanted. I wanted a huge chest piece, but I knew my mom would KILL me. Her response was "Well, you strike me as the kind of guy who would get a tattoo on his ass." She was right. I thought it would be hilarious to have "your name" on my ass. I didn't know Steve-o had it at the time. The regret comes because I ended up with "You're Name" instead. -iLLwiLLGivingThrills

Maybe you shouldn't get matching tattoos.

My ex-husband talked me into getting LV on my arm and OE on his. We also got ring tattoos after the wedding. He left me for his secretary one month later. I want to chop off my finger and the maintenance men at work call me Los Vatos. -motherpsycho

16 year old me thought I'd be the epitome of badassery if I got a tribal tattoo on my arm that would show when I wore my football uniform. What a dumbass I was. Although I wouldn't say I regret it, it's an ever-constant reminder of how I've grown as a person.

You might not want to get a tattoo honoring someone you don't know.

Being a young cancer survivor I was a huge Lance Armstrong fan so I went and got this big piece down my ribs that says "Livestrong" which I was really satisfied with. Until 3 days later it was plastered all over the news that Lance was being stripped of his titles and using performance-enhancing drugs. I stopped showing it to people after that... -tweester09

I got a geometric heart on my chest. Middle of my chest. Why? I saw it on Pinterest, had extra cash, and got it the next day. I don't regret it I just still wonder why I did it. -kaelakakes

The word "Remember" tattooed in pirate-font just above my hip?

The four melting creamsicles vaguely in the "Black Flag" design?

Or my piece-de-resistance, my homemade "PUNX" across my ankle that was done in a font that could best be described as "lightening sadness".

My body is a testament to poor decisions and having 75$ several times in my life.

This person has sage advice.

I only regret 2 of mine because they are tribal pieces. When tribal was the most popular thing back then, and now not so much. Never get a tattoo following a fad. -sabbath711

They were 1/8 Irish, so obviously they needed this.

I have three tattoos - got all three within six months of my 18th birthday. One is a frat tattoo for a frat that I left the next year, another is an Irish shamrock (because I'm 1/8 Irish of course) and the last, and largest one is a flaming Yin-Yang symbol in the middle of my shoulder blades.

While I definitely regret getting them, they will always serve as a reminder of who I was then.

Turns out I was a giant idiot.

Oh dear, this one is really bad.

But on my wedding day, I won't be strolling down the aisle with the Mortal Combat dragon on my arm.

If you aren't sure what tattoo to get, just don't get one. You'll avoid having to pretend to be into astrology later.

I like tattoos, and I plan on getting more. However, my first tattoo was of my zodiac symbol (Pisces) and I kind of regret it. I don't even buy into all the zodiac shit, I just got it because I was eighteen and desperately wanted to exercise my right to get a tattoo. Now I have to deal with people asking me what the "H" stands for all the time, or trying to talk to me about horoscopes and astrology-related stuff every time I wear a shirt that doesn't hide it. -bambiundead

I regret getting mine. I was a hippy back in the day and when Jerry Garcia died I decided to get a Grateful Dead tattoo on my calf. Now that I'm all grown up that's not really part of my identity anymore and I hate wearing shorts now because of it.

I'm in the process of getting it removed, it's a lot more expensive coming off than going on that's for sure. I've done 8 treatments and anticipate around 12 for total removal. Total investment for removal $2,000.

Actually this sounds kind of awesome?

I have an elephant making it rain dollar bills from his trunk standing on a dollar sign...I used to be a stripper. 25 year old me isn't amused and has no idea what to tell people. -monasskicksass

My favorite was a guy I met in San Francisco who proudly told me and my friend that [his tattoo] meant eternal raven. My friend, who spoke Chinese, informed me it literally meant don't die big bird. -4theloveofcephalopod

When I was in high school I was a Juggalo and got a hatchet man tattooed on my outer forearm.

This still counts as an infinity tattoo.

I still really like it. It's a figure-8 snake eating its own tail with the word "veritas" above it.

It reminds me that truth is subjective and that everybody lies sometimes.

Why I felt I needed that at 21 is another matter entirely.

Then we wondered: what tattoo are tattoo artists bored to death of doing?

Is the infinity tattoo the worst offender?

It turns out: yes. But that's not all.

Infinity symbols that have names that are hidden within a feather, then the feather turns into birds, then the birds turn into dandelion seeds. All of that the size of a quarter in white ink on the bottom of your foot and you best make sure it's done like a watercolor tattoo. -darthinksmith_87

I will never tire of infinity symbols, however. Easy, and the most money for my time! -ladycoleopterist

But it's not just infinity symbols that are oversaturated

I really, really dislike the half treble half bass heart. I've probably done about 100. -RELisAwesome

Celebrity tattoos. People that get the same tattoo that their favorite artist has. Example: Rihanna's Roman numeral tattoo. I've lost count on how many I've done. -tattooed_n_high

Sometimes artists just don't want to draw so much stuff.

Mandala tattoos. They are really trendy at the moment and they take me forever for me to draw!  -septicdeath

For some artists, it's everything at once.

This artist wrote they were tired of this request: Hey, I'd like a tattoo designing involving my grandma, Harry Potter, my favorite sandwich, birds, lilies, my cat, Harry Potter again, an inspirational quote and the metaphysical concept of shame. No outlines, all on my ankle. I have £6. Yes, this is my first tattoo, why do you ask? -Abobalypse