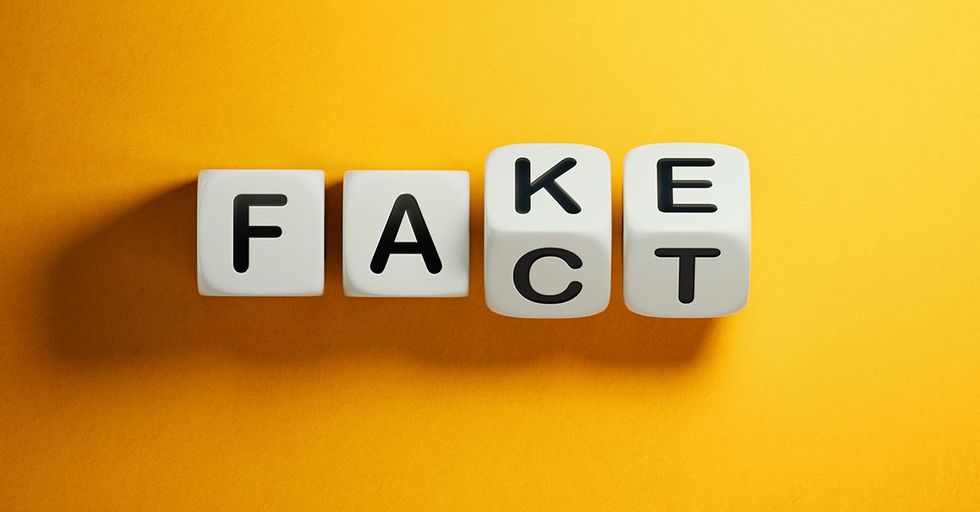 People Who Just Straight-Up Lied to the Whole Internet

Everyone lies at one point or another. That's just a fact of life.

Hopefully, most of the lies you tell are very small and don't hurt anyone. Also, I hope you have the wherewithal to keep your lies short, easy to keep track of, and — most important of all — off the Internet. I mean, sure, you might "enhance" the images you share on social media to present a better you. That's to be expected. But don't tell lies about things that you've done on the Internet.

Because you'll get called out on it. Every time.

Don't believe me? Well, then you clearly haven't spent very much time on the Internet. Every time someone gets online and says something blatantly untrue, the truth brigade is there to shine a light on it and make that person look pretty darn goofy. Here are some of the most ridiculous lies people actually thought they could get away with on the web.

I can also calculate how many electrons are in a nucleus. It's zero. Aren't I smart?

This didn't happen. I know it, you know it, that girl knows it. Heck, even Extra's marketing team knows it (although I'm sure they're huge fans of this post.)

Either everyone on that cruise had supersonic hearing, you were actually belting out a song at top volume, or you're lying about everything. I'm gonna go with option No. 3.

What Target is this where security officers are summoned at the drop of a hat? I call baloney.

Home of the braid.

I'm pretty sure God doesn't like it when you lie. There's, like, a whole book about it.

Almost every single sentence of this story contains a detail that would obviously never, ever, ever happen. But OK. Good for you.

I mean, plenty of people are named Madison. Maybe even one of them is named Madison after you! But...probably not.

14 years, huh? So...did you ask the trainer how long they'd been in the industry before or after your rude comment?

They're also not in the box. So many lies here!

I guess they forgot Mark Hamil has a Twitter account. I don't think they'll make that mistake again.

You can just make up anything and put any words into the space of the Internet. But don't expect to get away with it.

Oh, did I say my daughter was just getting into cooking? I meant she was just into Googling pictures of deconstructed Beef Wellington. It's kind of a niche hobby.

Most restaurants these days have their menus online. At least do your research before posting a false review.

I think you're lion.

This didn't happen. I don't think I need to prove it. Let's move on, shall we?

There is not a single person working at a drive-thru that isn't familiar with the concept of cash. You can quote me on that one.

"What do my hands doing?"

This is the only story on this list that I actually wish were true. How amazing would that be?

So much about this story doesn't make sense. Too much soy? How would you even do that? And what does the carbon footprint have to do with literally anything?

This didn't happen, and it's honestly kind of gross that you're even pretending it happened. Please stop.

First of all, what magazine has a page with a map on one side and a picture of Jesus on the other? It doesn't exist. Secondly, I'm not trying to parent-shame, or anything, but how was this activity supposed to show what the United States looks like?

OK. I don't need to get into this one, right? Let's keep going.

The only false thing here is that the teacher actually said "carry on, carry on...as if nothing really matters." Get the story right. Sheesh.

What a very odd and very specific lie to tell. Also, I have made chocolate chip cookies so many times in my life, and I've never seen a recipe call for 2.5 cups of chocolate chips. It's always just 2 cups. So. Take that.

I truly hope for this person's sake that this story is a total lie. I don't want to live in a world where this exchange actually took place.

Speaking as someone who owns a dog, I would like to take this opportunity to say that dog owners are sometimes the worst. This is exhibit A.

A doctor at the gym.

Either these people were not actually a doctor and a nurse, or you are just full of blue mud. Or both.

Honestly, I believe that a high schooler would ask about "Careless Whisper" as a way to be "funny." But the saxophone? Nah.

It's true that college professors don't care as much if you miss class... But they also don't really care about you at all. So no, you're not going to get their number.

So much to unpack here.

Why do people do this? Lie on the Internet? What is to be gained?!

Reading this made me roll my eyes so hard that they honestly might be stuck. Luckily, my two-year-old daughter is a psychic ophthalmologist, so she instantly knew I was in distress and was able to come to my aid immediately. Also, she's a millionaire who went to a Sex Pistols concert by herself when she was only 3 months old.

OK, this one actually definitely happened. Nah. Just kidding. Share this with someone who could use a laugh — or a good eyeroll.