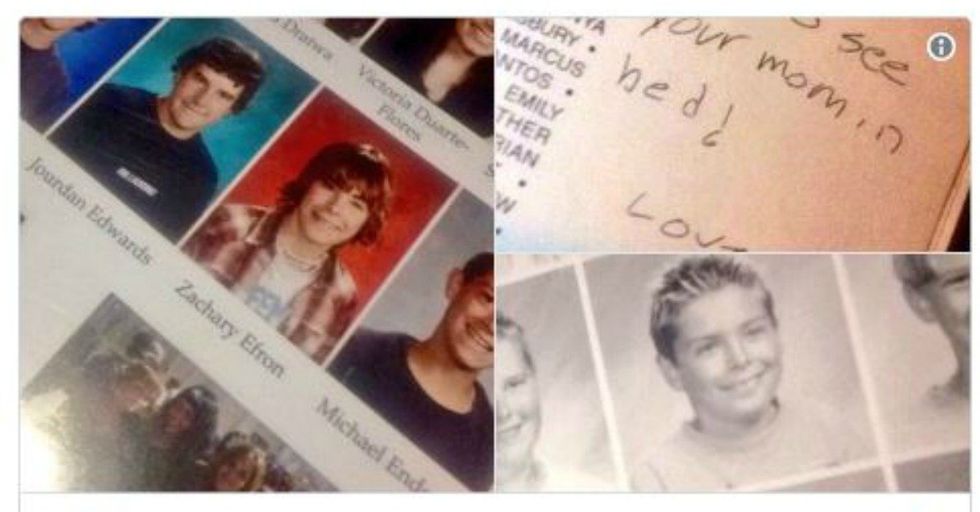 These Throwback Celeb Pics Before They Were Famous Are Hilariously Relatable

Celebrities – they're just like us! But are they really? When you think about your favorite celebs, you tend to imagine a glamorous life of designer clothes, $1,000 dollar haircuts, private jets, luxurious mansions, and red carpets, right? But everyone has to start somewhere, and before they got their big break they were typical teenagers trying to figure out what they wanted to be when they grew up just like the rest of us. And yes, they also made some very unfortunate hair 'do choices, just like the rest of us. (There are a few pics from my own prom that I've been meaning to burn for a while now.)

The following pics of celebs were uncovered by the people who knew them before the rest of the world did, and they're surprisingly relatable. So sit back, relax, and scroll through these throwback pics that would probably make Hollywood's biggest stars cringe with embarrassment. Josh Duhamel, I'm looking at you.

Check out these sweet snapshots of a young Leo! They were taken by a family friend during the time when he allegedly dated this user's Aunt. This looks to be right before the time he starred in the movie This Boy's Life, which would be his big break.

Ah, young love. This user's Mom (who was a total '80s babe) dated funny guy Sandler when they were teens.

Here's another example of a young romance blossoming before the allure of Hollywood was too much to ignore. While it's sad for this person's Mom, if this relationship had worked out we'd never have been able to watch Joey get a turkey stuck on his head on Friends, so it's really for the best.

TIL that former first lady Michelle Obama's middle name is LaVaughn, which couldn't be more lovely. Also, of course, her quote is about the value of friendship. Michelle has always been a class act.

So apparently, this poster was lying about her Mom's so-called relationship with Woody and this was actually just a fan photo after running into him on the street. But another Twitter relayed a story about Harrelson stealing someone's girl at a party back in the day. I guess Woody has always been a sly dog!

How cool would it be to have Jamie Foxx be your UNCLE?! This photo shows the softer side of Foxx that the public rarely gets to see.

For all the true crime nerds out there, you may recognize Elizabeth Short as her better-known alias The Black Dahlia, who was brutally murdered by an unknown assailant in 1947. I'm not saying this person's grandpa did it, but if this were MY grandpa, I couldn't help but wonder.

And now, for your viewing enjoyment, I present to you this gloriously long-haired version of Bradley Cooper. If you're reading this right now, Brad, please bring this hair back.

It's tough to look at this hilarious photo knowing that he would grow up to be one of Hollywood's biggest sex symbols. It's mostly the mullet.

Here's a pic of a young, hairy John Travolta with the mother of a woman he used to date before his big break. I'm guessing this was RIGHT before Saturday Night Fever because he clearly has that late '70s disco vibe going on here.

I have so many thoughts and feelings while looking at these Zac Efron yearbook photos. First of all, the frosted tips are giving me serious early 2000's flashbacks. Secondly, Efron's saucy note in this guy's yearbook proves he was always a cutup. And thirdly, let's all just try to forget that Puka shell necklaces were at one point a thing.

Based on this picture, Usher has always been an adorable heartbreaker. Also, he's apparently a vampire who refuses to age.

I think the main thing we've learned from this series of photos is that everyone had a gorgeous Aunt in the '90s. Seriously, look at this power couple!

The preciousness of this photo is almost too much to handle. Plus, it's a rare glimpse of Grande without her signature high pony! It's rather unnerving, to be honest...

For all you WWE fans out there, here's a rare pic of Mach Man Randy Savage seemingly strangling a young boy in someone's living room. Looks like the kid couldn't be happier about it, though.

Look at baby Drake! This photo really tarnishes his whole tough-guy rapper image. Love him or hate him, you have to admit that he was an insanely cute kid.

Check out these two groovy '70s babes! This guy somehow managed to steal his wife away from THE FONZ, which I'm guessing was no easy feat.

Yet another example of someone's cute Aunt nearly ending up with one of Hollywood's biggest stars. I wonder if skills as a talk show host were obvious even back then.

If anyone can rock a tiara, it's Will Ferrell. What a surprise that this goofball grew up to be a famous comedian.

@daniiellarenee if anybody knows me they know that my greatest anecdote is that my aunt dated ashton back when he w… https://t.co/LbehVc57vo
— Molly Peterson (@Molly Peterson)1522728698.0

Oh, look! ANOTHER celeb-dating Aunt! Also, the fact that she called her brother an "ugly baby" is peak sibling banter.

How insane would it be to be flipping through your Dad's old yearbook only to stumble upon a picture of a young and extremely dapper-looking Kevin Hart?!

Clean-shaven Blake Shelton rocking long, curly hair is a beautiful thing to behold. I wonder what Gwen thinks about this throwback pic...

Proof that John has always been a legend with the ladies. Hey Chrissy, how do we convince him to bring back this fro-and-goatee combo?

Thankfully, Hartnett learned how to keep his eyes open during a photo since his high school days. I'm sure all those red carpet appearances helped.

You could already tell at this point that this kid was destined for stardom. Just look at him rock that tux! He already looks like he'd fit right in at The Oscars.

Here's former president Barack Obama posing for prom pics in Honolulu, Hawaii with friends Kelli Allman, Greg Orme and Megan Hughes. Do you think they had a feeling even back then that he'd grow up to be POTUS? He did seem to exude that presidential poise even as a teenager.

Recognize this future heavy hitter? Mayweather has been a professional boxer since 1996 and has held multiple world titles throughout his career. You wouldn't think he was such a tough guy based on these pics!

Who wouldn't want to roll up to prom with Snoop Dogg on your arm? You're pretty much guaranteed a good time with the D-O-DOUBLE-G.

And finally, here's a positively glowing Beyoncé with her high school boyfriend, Lyndall Locke. Let's all take a moment to fully appreciate that ridiculously amazing dress. The cutouts! The spirals! This photo proves that Queen Bey has been a fashion pioneer since birth.