People Who Love to Drink Gin Are More Aggressive | 22 Words 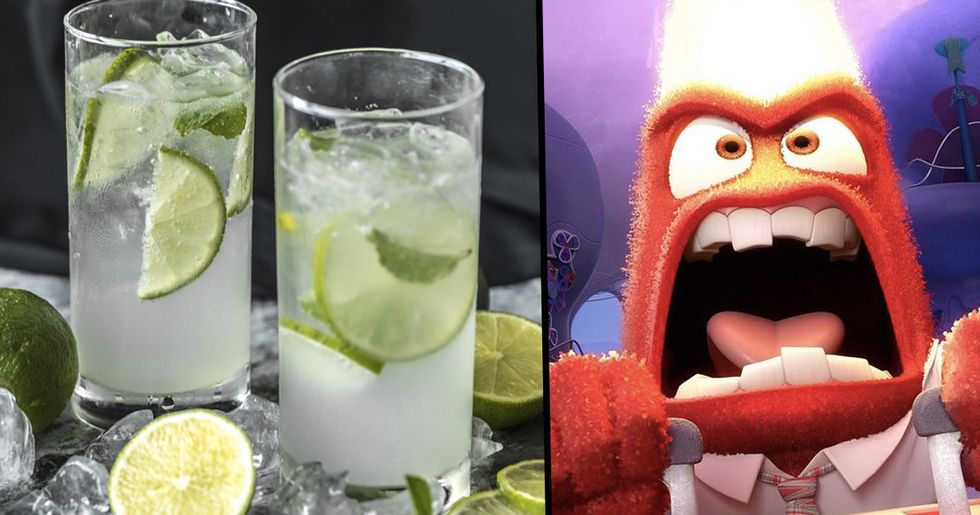 People Who Love to Drink Gin Are More Aggressive

Alcohol does a lot of stuff to us. We may love to knock back a few cold beers, indulge in a glass of red wine, or stir whiskey on the rocks around in a highball glass to make ourselves feel like a fancy rich person in a fedora circa 1947, but along with the fun benefits of drinking, we all know there are downsides, too. Just ask any girl who had too many margaritas at happy hour and is now sitting on the floor of a Mexican restaurant bathroom crying to a stranger about her ex-boyfriend's new girlfriend. Or ask any guy who thought shotgunning two Coors Lites in a row was a great idea.

It's long been conventional knowledge that different kinds of alcohol make you feel different ways.

It's different for different people, but for the most part, every alcohol has a stereotypical reaction associated with it.

Who hasn't cried after drinking too many IPAs?

And spirits make you angry.

And, you're more willing to get into bar fights!

How'd this tattoo of a butterfly fighting a dinosaur get on my bicep? Oh right, margaritas.

For the most part, this was observational knowledge.

You know red wine makes you sleepy because your mom always has one after bed and can't stay awake for the end of NCIS, for example.

But now a scientific study confirms it!

Researchers in UK conducted a study to find out how people react to different types of alcoholic drinks.

The study found that many of our assumptions about people's behavior after drinking alcohol was right on the money.

And red wine really does make you sleepier than other drinks (duh).

They didn't look at less popular drinks like cider.

Or mead. Have you ever had mead? It's good.

The purpose of the study was to reduce alcohol-related deaths.

According to the study, over 3 million people a year die in alcohol-related deaths.

They hope that by studying the changes in people's moods when they drink they can better understand what causes people to drink in the first place.

The study reports that many people say they drink for the positive emotions associated with alcohol use.

Such as increased happiness, relaxation, and helping with social anxiety.

And it turned out men are even more likely than women to feel aggressive when they drink spirits.

And men who mostly drank beer were noticeably more relaxed than spirit drinkers.

They reported less aggression than men who drank spirits.

Young people were the most likely to show a range of emotions.

People between 18-24 reported the most emotions when drinking. No surprise there! Young people are full of feelings.

Spirits were also more likely than beer or wine to make people feel sadder and sicker.

Did they really need a study to find out that taking shots makes you throw up?

But it wasn't all bad.

The survey also showed that spirits made people feel sexier than other types of drinks.

Whether or not they looked as sexy as they felt was not studied.

I'm no scientist but I'm going to guess that's a no.

So where did they get this information?

Because I'm imagining a laboratory full of people downing a lot of Irish car bombs and then trying to fight each other.

But they didn't actually get people drunk.

The information came from the Global Drug Survey, a self-reported survey that asked people over the age of 18 from countries around the world.

The researchers think that perhaps people think they will feel positive emotions when they drink because of advertising.

You never see an ad for alcohol where someone is yelling at a parking meter they think is their ex-girlfriend.

But because media loves to trick us into thinking things are true that are not true, people keep drinking spirits trying to chase the high they see in ads.

But instead, it makes them feel mad.

It's unclear how this data will help reduce alcohol-related deaths.

But the researchers hope knowing how different types of alcohol effect people will be a good start.

And because alcohol-related violence often affects people who are not drinking, knowing which drinks make people more aggressive could reduce injuries or deaths to those people.

But again, the study didn't specify what steps would lead to that.

Do spirits make you madder than other drinks? Or does throwing back a refreshing gin and tonic make you feel relaxed?

Or does it make you feel sexy?

In any case, at least we know we were all right.

It's nice when science proves what you already know.