39 People Who Made Some Very Strange Life Choices | 22 Words 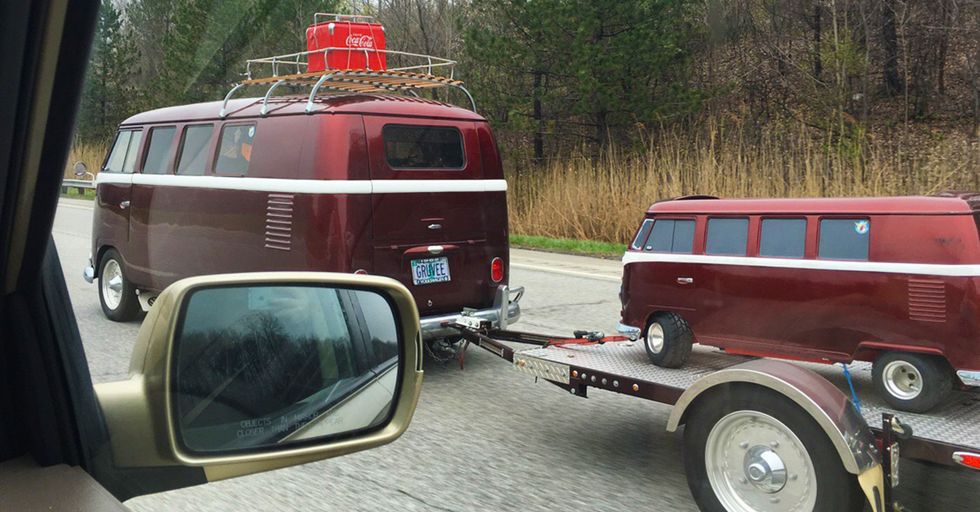 39 People Who Made Some Very Strange Life Choices

Have you ever stopped to think for a second about the choices you made years ago that led you to where you are at this exact moment in time?

Maybe it was choosing a certain college (or deciding not to go to college at all). Maybe it was crossing paths with one particular stranger.

Maybe it was simply deciding to eat an egg salad sandwich that looked like it had seen better days.

What I'm trying to say is that the choices we make define who we are...for better or for worse.

The people in these pictures sure made some interesting decisions.

Some of them may be geniuses. Some of them...maybe not so much. I leave it to you to decide.

This guy at a music festival:

He made a pair of pants out of his hats from previous years' music festivals. Not only does it prove that he's a real fan; it also gives him something to wear.

The owner of this truck:

They decided to wrap their brand-new truck so that it looks like an old, rusty truck. Maybe they just miss the last truck they owned.

This guy waiting to pay at the register:

Uh, I'm not sure what's going on here. Is that even comfortable? He sure does have incredible balance!

This guy at the grocery store:

He's buying so many frozen pizzas. Either this guy is planning a serious party, or he has walked into one of the math problems in your high school textbook. This next picture is perfect for anyone who really likes trucks.

What? You mean you don't take your bird out for walks in a specially made bird stroller? That's odd.

I feel like there's a lot to unpack here.

This guy knows how to cruise.

Bicycles are cool, but you have to pedal those. Wouldn't you rather just lounge?

This is a picture of a guy with a 30-gallon drum of Cinnabon icing. On a bus. I don't know his story, but I think it's fair to say that he's done something right with his life. This next guy, on the other hand...

When one backpack isn't enough.

This is why you should wear sunscreen.

This guy shaved his head and then got a sunburn. Remember, kids: You're never too cool for sunscreen.

Sure, he could just go to a hair salon. But where's the fun in that?

This guy is my hero.

He knits sweaters of places...and then goes to them! Here he is at Stonehenge.

...And here he is at the Golden Gate Bridge!

Forgive me; I had to include another picture of this guy who clearly has life more figured-out than I ever, ever will. Next up is someone who clearly knows how to have a good time.

Snowing? Better put on my snowsuit.

When you're stuck in the middle of winter, you really have to do whatever you can to make yourself happy. Sometimes that involves a Tyrannosaurus rex costume.

Know how I can tell? 'Cause he's taking a picture of his vape at the beach. Cool.

New life goal: Get a pet bird and bring it to Taco Bell. I'll do whatever it takes.

OK, new life goal: Get a pet duck and bring it on the bus with me. Maybe also take it to Taco Bell. All birds like Taco Bell, right?

For whatever reason, this person decided to install a planter on the back of their truck. And you know what? I don't hate it. Take your hobby with you wherever you go! These next people may have taken that sentiment a bit too far, though.

Yep, this is seriously strange. But I would still 100 percent do this every morning for my commute if I had the option.

In death as in life.

This is anthropologist Grover Kranz and his beloved dog Clyde. Kranz donated his body to science on the condition that he be kept with the remains of his dogs. Eccentric? Sure. But also kinda sweet, don't you think?

This guy knows how to travel.

His carry-on item is just a gigantic cheese wheel. I would definitely try to get the seat next to him in order to ask him about his whole life.

Just ridin' a stick down the street.

Some people buy scooters. Some make them out of fallen branches. Honestly, I don't really know which option is better, but I did notice that the stick scooter does not have a brake.

Check out this hard hat:

Yes, that's an actual hard hat shaped like a cowboy hat. Imagine being a cowboy so much that even your work uniform needs to reflect that. Remember that bird stroller from earlier? Well, this next picture takes it to the next level.

A bird and a dog!

Taking your dog for a walk is so last year. If you're not pushing a stroller containing both a dog and a pigeon, you're not even living, my friend.

Goat in the drive-thru!

Say what you will about this woman who is bringing her goat through a drive-thru restaurant, but I personally think she's kind of a hero. Imagine if she brought him inside instead!

We heard you liked pants.

This guy's pockets are tiny pants! This is weird, but I just love it so much. I am absolutely going to try to hunt down my own pair.

Here's another pair of pants.

Actually, it's two pairs of pants! He's wearing jeans under his suit pants. There's gotta be a story here, right?

Something has gone wrong.

Just kidding. This is just the leg of a man who was cutting stone with a saw for a couple of minutes. Still, it looks a little freaky, huh? This next guy knows everything about camping.

Is that a Pop-Tart?

Yes, yes it is. And you know what? I bet it tasted delicious.

This poor man appears to have no head.

And yet, he seems to be doing just fine on public transportation. Let that be a lesson to all of us.

Why not chomp on your shoe to pass the time? (Actually, it turns out that there are several reasons why you should not chomp your shoe. That didn't stop this guy, though.)

This guy has a tiny shoe for his cane!

I really hope he has multiple different shoes to match various outfits. And little socks, too.

This woman has decided to clean her car's bumper with some gasoline.

A word of advice for anyone who thinks this may be a good idea: It is not.

I don't know about you, but when I'm in the bathroom, I find it quite soothing to be surrounded by angel tree toppers, Cars party napkins, and fake flowers.

Why use a single raft when you have access to six of them? Just because it's not usually done doesn't mean it shouldn't be, right? (In this case, it probably does mean that, actually.)

The grass is always greener.

I bet this person was really excited about their decision to cover their car in grass. Until they had to mow it.

I'm actually really curious how you end up with this vehicle. Did you buy two identical vans and have them fused together, or did you purchase the pre-fused super van-limo? I need to know. Share this with someone who always keeps your life interesting!