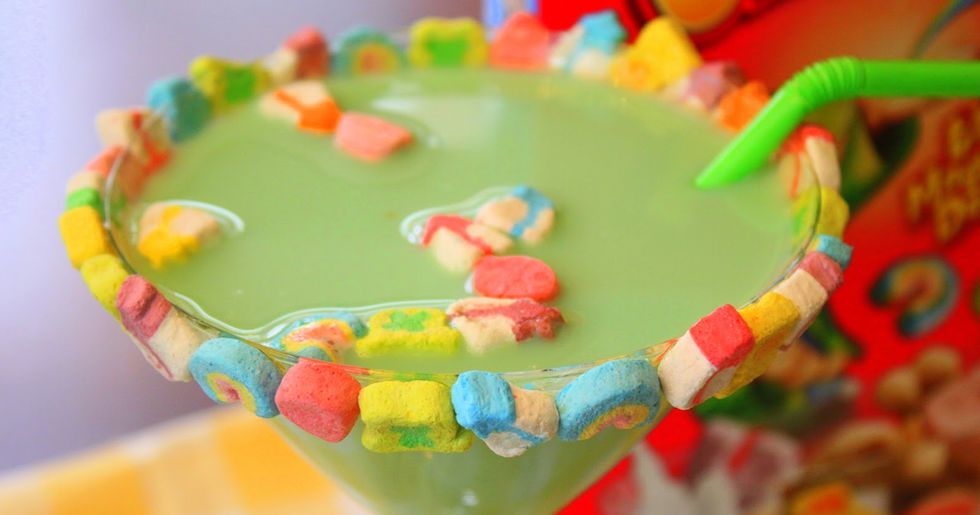 19 People Who Should Never Be Allowed Near Alcohol Ever Again

They say you should always drink responsibly.

Obviously, that means you should be responsible about the amount of alcohol you consume.

But it also means that you won't do what these people did.

Because these people have managed to take alcoholic beverages to a whole new level of failure. Here's a list of people I think should be cut off from ever making boozy beverages ever again in their lives.

The person who poured this beer:

Or, more accurately, the person who collected a bunch of foam in a glass and then apparently used an eyedropper to add just the slightest hint of beer.

The person responsible for this:

They used cola ice pops instead of ice. Why? Because some people just want to watch the world burn, I guess.

The person behind this travesty:

A Mountain Dew cocktail with a Dorito garnish? Thanks. I hate it.

The person who attempted this colorful drink:

And failed. Miserably. This covers the whole spectrum of fails. This next one honest made me gag.

The person who thought draping bacon over their drink was a good idea:

It was not. It was a very bad idea, actually.

The person who thought of this abomination:

A ramen cocktail! What could possibly go wrong? As it turns out, literally everything.

The twist here is that both of these drinks are bannable offenses. What were they thinking?!

The person who added this garnish:

You know what's kind of like a pineapple slice? A single leaf. Just kidding. Those things are nothing alike, and this is terrible.

OK, hear me out on this one. Oreos are delicious, and this isn't the absolute worst idea for a cocktail I've ever seen in my life. But this video led to someone trying to make the drink. Wanna see how they did? It isn't pretty.

Cookie Monster! Are you OK? What have they done to you?!

Every single person involved in this horrible, horrible recipe:

Grilled cheese-infused vodka?! Well, it's been nice, humanity. Unfortunately, we're gonna need to start all over from scratch.

The owners of this hipster bar in London:

They serve their cocktails in plastic bags. Because why settle for being annoying and inconvenient when you can also negatively impact the environment?

The woman in this story:

Although to be fair, she never had alcohol in the first place, so we're not really banning her, per se. Still, she should probably avoid bars for a while.

The person who put Swedish Fish and Nerds in this drink and called it a cocktail:

If you take nothing else away from this list, please know this: You can't just put anything in a glass with alcohol and think you've created something people are going to want to consume. That's not how this works. This next one will also make you gag.

The person behind this Buffalo Wing Cocktail:

I'm really, really hoping that this is just a cup of buffalo sauce. Alas, I fear it is actually meant to be a drink. For humans.

The person behind this sad attempt:

It's like they were eating an orange and decided to give up on everything as soon as they got it peeled. Now no one can eat it.

Whoever thought this was a good idea:

Haven't you always wanted to drink alcohol that was poured from a dead squirrel's mouth? Of course you have!

The person who invented this drink:

In their defense, they named it the "Desperation." Still. Applesauce??

And finally, the person who put ice cubes in this watermelon rind and called it good:

Adding ice and a bendy straw to a vessel does not make it into an appropriate beverage container. Just so you know. Share this with someone who could use a drink!