30 People Who Just Got Their Thanksgiving Invites Revoked | 22 Words 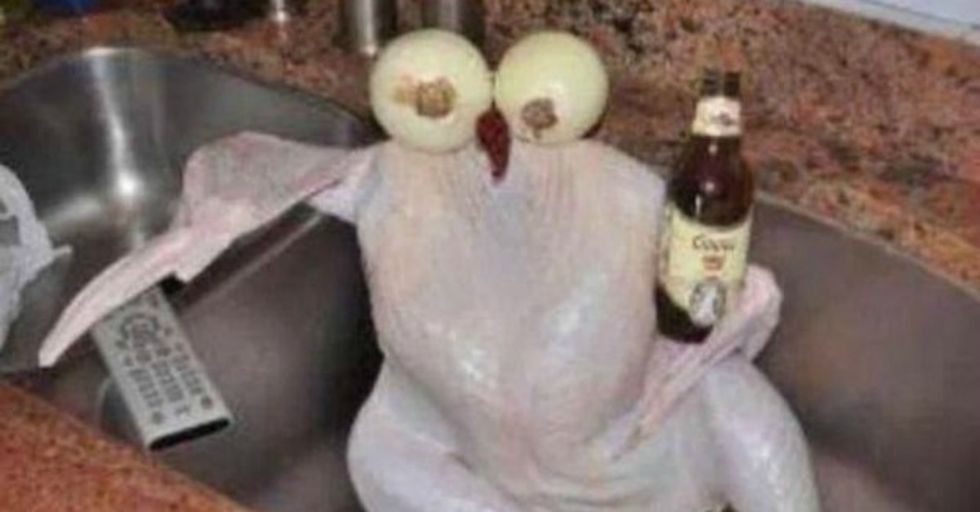 30 People Who Just Got Their Thanksgiving Invites Revoked

Ahh...Thanksgiving. That time of year when the smell of turkey is in the air, pies are thrown in the oven, and families and friends gather to stuff themselves with food (and as much quality time they can stand before they're ready to bolt).

It's also when some people who might not always be fluent in the language of food preparation (or anything else that has to do with the holidays) take to the kitchen.

I'm not sure that's something to be thankful for...

Their eyes! Apparently turkeys don't have eyes...or more than three feathers, or feet, or a hope at looking like the picture.

On the left? Sweet perfection. On the right? Burned hopes and dreams.

So if you can't make them on the stove, as our friends above seem to have trouble with, why not stick them in the oven? Oh, yes, because your glass can shatter and squash your dreams.

Because it's just not Thanksgiving without bringing the turkey hooker out!

If you stuck a charred turkey in a dehydrator and then back into the oven for 14 hours, it would still be more moisturized than this thing.

Maybe a little too much liquid? Your bounty runneth over.

One the plus side, this one looks better than the first attempt up above. On the other hand, this one appears to have a bit of striped camouflage thing going on.

The whole escape plan is probably a good idea, especially this time of year. But I'm not sure swimming would really be the way to go.

No thanks, foil turkey "watching me marinate." Send your guests home with decorations and traumatic memories.

An attempt at apple pies, and somewhere a nation weeps.

What are the odds of that? Her parents must be so proud.

I don't know what's more disconcerting — the sheer amount of potatoes coming out of the bowl or the fact they seem suspended in the air like globs of glue.

Stick It To Me

Even just pupils on those little buggers would make them appear to be a little less evil. And maybe a nose?

Fire in the Hole!

Do not try this at home. Or anyone else's home, either.

I hope whoever frosted this isn't allowed to go back to the kitchen again, as they need to leave a little more frosting for the rest of us to use.

Pumpkin roll that monstrosity right on out the door. Do square things even roll?

When life hands you lemons, place the rinds under the skin of the bird to add a little "life" to the breast.

Blow a bird-flavored bubble! Actually, no, don't do that.

Call me crazy, but I thought cornbread was more like...squares of bread? That's more of a corn brick.

They're pre-made rolls! You just have to warm them in the oven!

The Thanksgiving caterpillar coming out a rainbow? Your guess is as good as mine.

At what point does one not realize that things are looking a little bit dark? No amount of whipped cream on top of this thing will ever make it okay.

via: She Walks Softly

Any guesses? A turkey/anteater hybrid eating a mouthful of leaves, I assume.

I almost think I would prefer one of the charred birds above to one that looks like it's growing moss on top of its skin. Actually, I'll just have salad.