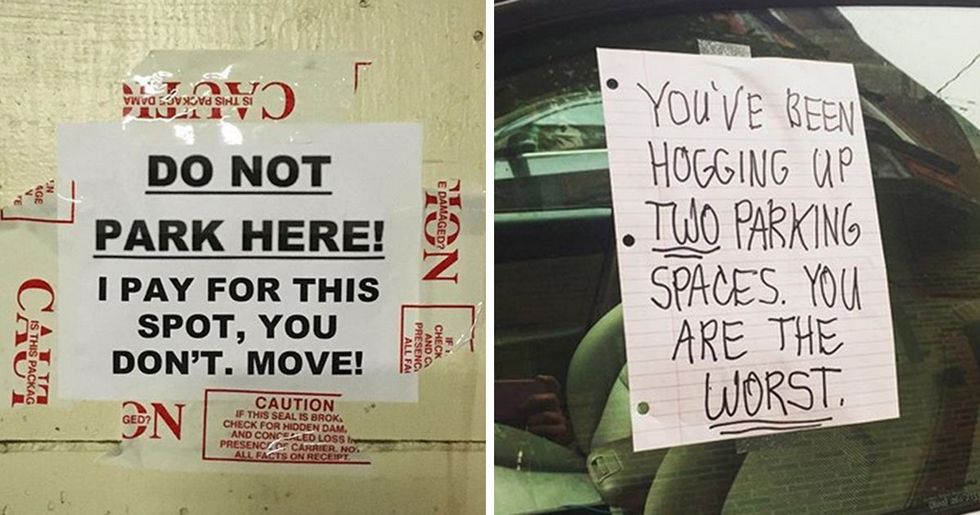 Have you ever been so angry that you didn't know what to do, but you knew you had to do something drastic? Get bangs, move out of state, or even — dare I say it? — write a strongly-worded note? I was taught very early on that it can help you to write out your feelings, and it turns out it works.

The people highlighted in this gallery were so angry they just could not take it anymore. They had to write a note. You know the feeling. Someone parks in your parking spot, the one that you pay for! Or someone takes up two parking spots when they definitely don't have to. Or they park super close to your car so you can't even open the door to get in. You get the picture. There are a lot of arguments that stem for parking disagreements. It is definitely a hot-button issue.

I hope reading these hilariously angry notes will be as cathartic for you as they are for me.

When you're angry, the best thing you can do is write a note.

It gets all your feelings out. It can be anonymous if you want it to. And you can be as passive-aggressive as you want!

And so the parking aggression begins. I mean, if I was paying for a spot, I would be so mad if someone else parked in it.

To be fair, that person does seem stressed, but it's also not super considerate to store your pot in the vents.

This is a real Chandler-from-Friends line. "Could it be any more sarcastic?" The answer is no. No, it could not.

This is the kind of note that I would write. When you are so frustrated you can't form words, you just call everyone the worst.

Not a parking space

I really hope this car was parked like, on a dock or on the top of a building or like, on the moon.

Wow. Harsh. I would not want to upset this adorable little penguin, and I doubt the Diet Coke thief would either.

This is so many signs about the people who are dropping bread on the street. I feel like they're only making the bread droppers drop more bread.

Do you guys think this was a passive aggressive enough note to leave on my neighbor’s car? #badparker https://t.co/rSAslvhNaM
— Andrew Wiley (@Andrew Wiley)1548539474.0

In a world with limited parking spaces, I have absolutely no patience for people who take up more than one space. Be like Carl, people.

Hey, it was nice of these people to even leave a note after they called the tow truck. They didn't have to be that considerate.

If I was the person singing, I would be so embarrassed! The complaint isn't about being too loud or obnoxious, just about being off-key.

Oh my god, who is grunting loudly in a public restroom while they poop? This is horrifying, and I can't believe there needs to be a note about it.

Poop in a field

I feel like the Ginyu boys would leave passive aggressive notes like this all the time https://t.co/Jsb42DY0at
— Aladayle (@Aladayle)1549621849.0

This isn't really so much an angry note as a very concerned note for someone's health and wellbeing.

Wow, this is a confusing note because it's a ruthless threat but it's written in such nice cursive handwriting.

This is sarcasm taken to the next level. This is such a good tactic to take because it's not technically mean and it's so incredibly cutting.

A-OH!!!!! This is some top-notch double entendre. I really love that "THANKS!" at the end too. Just the cherry on the passive-aggressive cake.

There is nothing funnier than notes from angry kids who are just figuring out how to be angry. It's adorable.

Oh man, nothing worse than being caught red-handed and called out by name for being the office thief.

This is amazing. If I was the soy sauce thief, I would take them up on this offer. Try and catch them in their own bluff.

Oh man. I would hate to be this person's roommate. They seem like a lot to handle.

Might start a blog showcasing the many passive-aggressive notes I find in various NHS buildings https://t.co/AsH6JCb2Xx
— Mathew (@Mathew)1547809240.0

This is...too much. You could leave a passive-aggressive note like this, or you could have a conversation with your housemates and tell them to wash their own dishes.

I have never lived in a building with a garbage chute but I can imagine that it causes a lot of drama.

Ah yes, I know the woes of sharing a laundry room with people. But maybe that person's laundry was in the machine for hours taking up space!

I love the visual representation of the "bad mom" in this. In case you forget what she looks like.

What was this person doing that the walls ended up full of grease? That's so gross and so "NOT COOL!"

Who steals plants from someone's yard? How do you even do that? Did they dig them out of the ground? I have so many questions.

I would buy some of these parking business cards, but living in LA, a 500-pack would only last like, a week.

OK, here's the thing. Parking halfway into a driveway is not cool, but the touching bumpers thing...isn't that what bumpers are for? As long as you don't damage the other car, I think it's fine.

The first sentence claims that the person drawing penises is the only one who "finds humor in this." But I find it hilarious. So they're wrong.

Hey, free condom! Share this with someone who understands the power of an angry note!