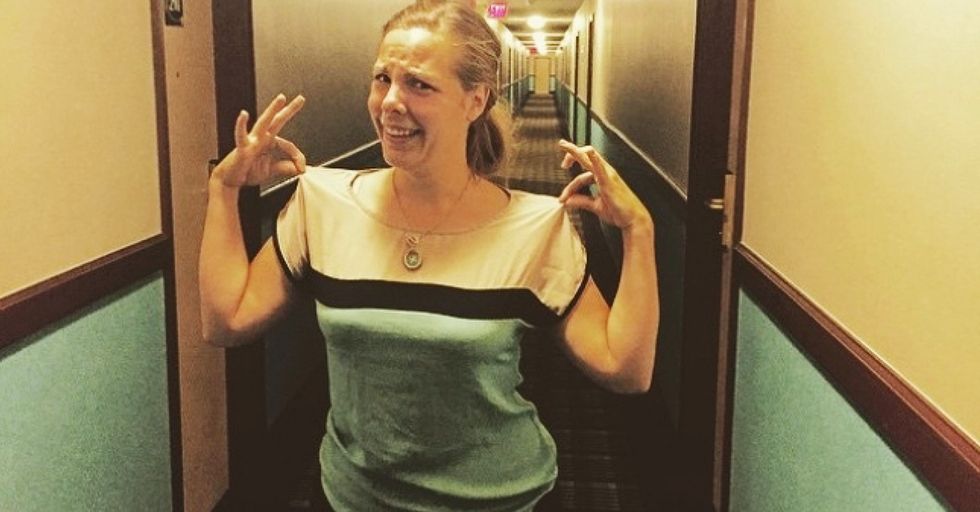 19 People Whose Clothing Made Them Disappear Completely

But we're pretty sure these people didn't mean to blend in this much. These 19 people are wearing clothes that blend in so much with their surroundings that it's actually kind of frightening.

Honestly get this kid some water and have him spray it out of his mouth, and you would never know the difference.

Yes, that is exactly the face you should make when you accidentally match the hallway of your random hotel.

Yes, OK, sure, camouflage was made for people to be able to blend in, but I don't think it was specifically made so you could hide in the crevices of your grandma's floral couch.

She does not look too pleased to be matching the shopping mall floor. Coincidentally, this is also the face you make when another woman wears the same dress as you to the party. The next one is uncanny...

Quick! Which one has more vitamins? Hard to tell, isn't it?

This guy's outfit matches those flowers perfectly. Those are some bold spring colors, my man.

Blending in aside, that is one very turquoise suit. All of it.

This woman posted this photo on her Facebook with the caption, "I went to a wedding... My dress matched the carpet! I'm inspired by the woman whose post went viral because she matched the hallway. Let's see where this goes. Please share!" Readers, she went viral.

That's some carpet. Those are some shoes. This whole scene is a lot. The next one is, coincidentally, also a lot...

That sounded a lot dirtier than I intended it to. It's just a lot of leather. Can you imagine the sound it makes when he gets up?

OK, matching outfit aside, is that a giant chair or a tiny woman? Because I think that's a giant chair.
OK but this is terrifying because I'm pretty sure that is the exact pattern. Is that like, a really commonly used pattern or something?

This one might be hard to see at first, but if you look at the orange and white pillar on the far right, that's actually a man walking.

This person with disappearing feet

Side note: Both those socks and that carpet look hella comfy and inviting. The next one is truly insane...

This work of art

Not only do both the top and bottom halves of this girl's outfit totally match the floor right where the carpet shifts, but that top half is like a really strange pattern and not just a solid color. Crazy.

This picture looks like it was taken in a clandestine way. Does that mean the photographer doesn't even know this person? That makes it even weirder.

This woman who's full of shame

Look, the tan and red combo is a little weird, but it's not like, cover your face in embarrassment weird.

I wonder if all day people had heart attacks when this woman walked down the hallway, thinking that she was floating in the air without legs.

When your shoe matches the bathroom tile, you have to wonder where the shoe designer got their idea for the pattern... Share this with someone who stands out in your life!