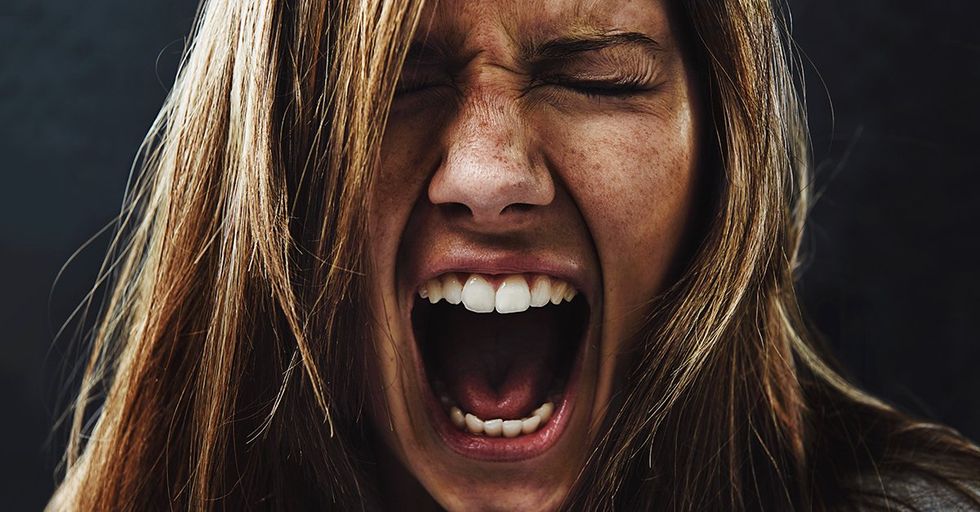 According to the National Alliance on Mental Illness (NAMI) "Schizophrenia is a serious mental illness that interferes with a person’s ability to think clearly, manage emotions, make decisions and relate to others."

It's one of those feared illnesses that's very poorly understood.

Here are 11 people who suffer from schizophrenia (or close friends and relatives of sufferers) on what their worst hallucinations are like.

2. KKK, witches and a puppy

This is one of the scarier, more confounding hallucinations we've heard of. Redditor poodlepuzzles, who actually suffers from schizophrenia himself explains:

I have psychosis and it usually is worst when I’m alone or at night. Doubly so if I’m alone at night. When I was housetraining my puppy I had him outside at 3am, and I saw what looked like the KKK and some witches having a seance. I then heard whispers mentioning killing and saw the group start walking up the street towards my house.

Thankfully, that’s the worst it’s ever been. I do still have minor fleeting hallucinations when I’m stressed, but it’s more like seeing a shadow out of the corner of my eye and is much easier to ignore.

This literally sounds right out of American Horror Story. We can understand why they're scared.

This Redditor's story has us uncomfortable, nauseated, and blocking our ears against the sound of chewing. But not any old chewing....

Okay, this story is legit out of a scary movie. We can't even read it twice, we're so scared. Literally not for the faint of heart.
User idk_just_bored explains,

I was in school, like, 10th grade, and I'd heard voices for a bit now, to the point that I was almost getting used to the fact that I hear things others don't. I remember getting up from my desk to use the toilet, and when I got out of the room, I see this man with no face, just standing there facing me.

At first I just thought my eyes were messing with me, so I blink a couple times, shake my head a little bit, and look back. And he's gone. No way he could have moved in those empty, silent hallways without me hearing it, but he's gone. So I just go to the bathroom, thinking it's kinda weird, but not thinking too much about it. I even joked with myself that "now I'm seeing things too haha". But when I got to the bathroom, he's there again, standing in the doorway.

I stop and just kind of stare for a second, more curious than anything, then I think: "well maybe he's just wearing a mask or something", and I ask if he can move over and let me in the bathroom, but then this other kid comes out and asks who I'm talking to, right as he walks through the faceless guy. I just stand there, speechless, cause what do you say in that situation? The kid looks at me like I'm weird, but then just walks away. The dude with no face moves over to let me by, and I give him as wide a berth as I can while I go in, never taking my eyes off him. He followed me into the bathroom, and a few seconds later this girl walks in, and I begin telling her that she's in the wrong bathroom (I'm a guy fwi), when I notice that she doesn't have a face either. They both begin walking towards me, and at that point I'm pretty damn scared, so I go and hide in one of the stalls and bawl my eyes out, cause at this point I realize that I'm pretty much just crazy. I didn't come out until the staff came and talked me into it. The two of them (the guy and the girl) show up every now and again (note, I've since graduated and moved away from there, but they still show up wherever I am), but they never do anything, so I don't know what to make of it, but that first time scared the living shit out of me.

5. Demons in her shoes

Redditor Steamstroller says:
Redditor Stinkybritches has an explanation for this phenomenon and a story to go along with it:

In one of the more disturbing descriptions we've read, Redditor thegirlfromthestars says:

Redditor brazieroflive had this horrifying hallucination:

[...] One Friday evening I was watching TV, and happened to be playing with a flashlight that I'd left on the coffee table. Boom, next thing you know I'm in a full blown hallucination. I heard a special forces team out the window, as they were sneaking out of my back yard. I flashed the light around the room, and they got quiet, and they misunderstood my intent; they thought the light was mounted on a rifle.

Next thing you know they're calling me outside as part of a SWAT response, and I'm on my hands and knees on my porch in the dead of knight, asking them to please not shoot me. I must have stayed out there about two hours, with my hands locked behind my head, as the snipers got more and more nervous about what I might do. Eventually they decided that there was no way to defuse the situation, and they shot me. I spent about five minutes laying dead on my front porch, then crawled inside my house to die. I phoned my mom to let her know that I'd been shot and that special forces had killed me. Needless to say she wasn't buying it, and talked me down to earth a little bit, but that wasn't the end of it.

She had me go to the ER, and stayed with me on the phone until I got there. I'm still in full blown hallucination mode, so while I'm waiting in the ER I hear the leader of the special forces unit chatting with the front desk nurse. He knows that I'm there, and is coming to get me. Luckily the doctor found me first, and didn't really know what to do with me, so he gave me 2 milligrams of Ativan and discharged me. So I drive home, still hallucinating and now somewhat high from the Ativan, and I see all types of crazy stuff on the way home. Once I get home the Ativan mellows the hallucinations into something enjoyable, and I spend the rest of the weekend with playful hallucinations. I can't really describe the fear of having special forces snipers aiming at you for two hours straight

Fortunately the scariest I've ever had is just people calling my name from another room when I know I'm the only person in the house. My audible hallucinations don't have a great vocabulary, and most of the time just sound like someone doing jazz scat, which is kind of annoying and makes it hard to sleep. Visually I'll sometimes see people standing in windows who aren't there on a second glance, or small shadows darting around like mice. I'm extremely fortunate that my symptoms are relatively mild.

[...]Worst of all would have to have been the time I was convinced I was being abducted by aliens. I was in bed and staring at the ceiling when a bright light appeared like a circle above me. And I felt like I was being raised up into the air from a center point in my chest. I could see shadowy figures gathered all around the bed looking at me being lifted and they were all whispering, but the whispers gradually grew louder until it was like the sound of wind. But I somehow snapped back into reality, very frightened but obviously unscathed. That had to have been the most intense hallucination I've had in my life[...]

Number one scariest was the first time. I was in the bathroom and suddenly I hear what sounded like a mob of people shouting and threatening they were coming to kill me and burn me alive. I had never experienced this before and it sounded just like real people were outside my house. I almost had a heart-attack. I went to the window and saw everything was quiet. I waited, because I thought maybe they are far away. I waited and waited and then I went out looking for them. After a while I realized that I was probably going crazy.

The second scariest was when the aliens were coming and they would cut my head off. They would keep it alive using alien technology and after raping it and humiliating it, they would lock it in a dark basement with nothing around. So I was just going to be a body-less head mounted on a wall in a dark basement until the end of time.