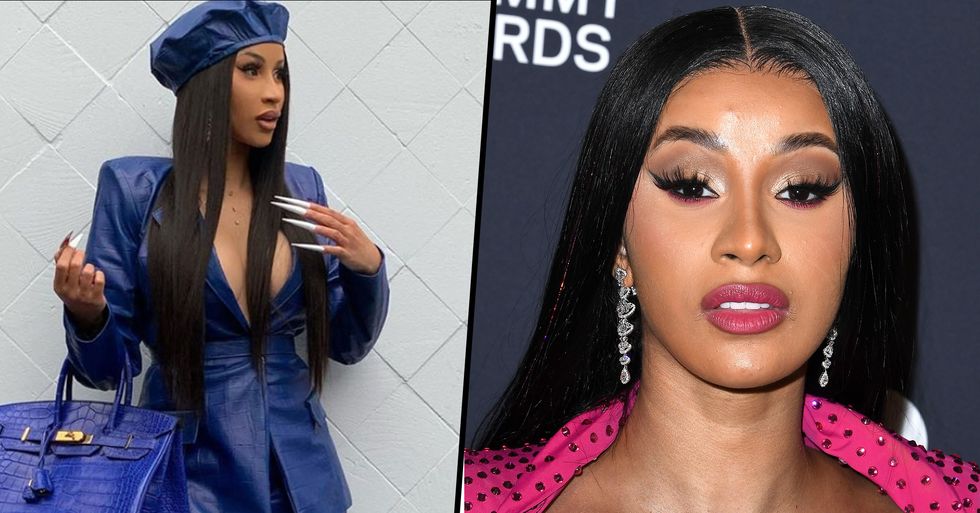 People have been trolling the living hell out of Cardi B's most recent Instagram post... and it's all over her toes.

Weird, right? Keep on reading to check it out...

Cardi B isn't the type of woman to take any nonsense...

But in more recent times, the rapper has found herself being trolled relentlessly on Instagram and it's all thanks to her feet.

Cardi B is unbelievably successful...

And she has been named as one of the most popular female rap artists of our generation.

But the rapper had a pretty difficult start in life...

Born in the Bronx, NY, Cardi (her real name is Belcalis Almanzar) came from a life of domestic violence and poverty and had to resort to stripping aged nineteen to make ends meet.

This wasn't a path she ideally wanted to go down...

"The first time I stripped I was really embarrassed, I felt like I could hear my parents voice in my head," she told ID magazine last year. "After a while, I didn't even care anymore. I was seeing the money that I feel like I would've never seen ever."

But after 2 seasons, Cardi announced that she would be leaving the show to pursue a career in music - the thing she was truly passionate about.

She soon made her musical debut on Jamaican reggae fusion singer Shaggy's remix to his single "Boom Boom"...

In the space of 2 years, the singer's life took a complete U-turn.

But before she became an awarding-winning singer, she was a social media star.

Cardi first found fame when some of her posts on Vine and Instagram went viral, catapulting her to instant stardom. Her stage name, Cardi B, came from her family nickname... Bacardi. Quite fitting, don't you agree?

The star has since become renowned for her headline-making behavior...

But Cardi's outlandish behavior has only propelled her even further...

Her crude lyrics and overall overwhelming stage presence certainly haven't stopped her from succeeding; they've done quite the opposite, in fact. Throughout her career, she has bagged herself a Grammy, 7 Billboard Awards, 3 MTV Music Awards, and 2 Guinness World Record Awards. Not too shabby.

You have to admire her confidence...

She documents every single aspect of her life on Instagram...

And I feel many parents will agree with me when I say that Cardi's Instagram page is not a place for children.

Her outspoken nature on social media has landed the rapper in quite a lot of trouble in the past, however.

For example, who remembers the time when Cardi decided she was going to post a picture of her daughter which had been edited to show what the child would look like as an adult?

When a fan pointed out that the 2-year-old actually looks more like her sister than her, things got awkward.

It seems as though one fan had their own theories, suggesting Kulture looked more like a combination of Offset and Cardi's sister Carolina, AKA Hennessy. Yikes.

Responding to the fan, Cardi wrote this:

“I think cause Hennessy got c****y eyes like Offset and so do KK. It's the only think [sic] I could think off [sic]."

Fans immediately jumped on the singer, calling her out for the use of the racist slur often hurled at Asians.

That's when everything took a dramatic turn and Cardi was on the receiving end of intense backlash to which she was forced to respond.

She then said this:

She also added that she was "sick of the internet."

But if you do say something offensive, the usual response is to apologize and then move on. Why get enraged when you're the one that did something wrong?

Cardi is clearly a hot-headed woman...

And fans being upset with her behavior doesn't seem to phase her... at all.

And Cardi has been continuing to show off her lavish lifestyle that includes lots of designer clothes, makeup... which is all in her multi-million dollar house shared with husband Offset and their daughter.

But despite her glamorous posts...

Trolls have been targeting the rapper recently over the most unusual thing... and that's her toes.

And it showed her posing in a cute leather 2-piece outfit with some seriously high heels... but all fans could notice was something weird about her feet.

And if you look just a little closer...

Yep, those shoes look painful, to say the least.

We hope that Cardi's feet are doing okay... but we're sure that the rapper is just fine! Keep on scrolling to read about TikTokers injuring themselves trying to dance to Cardi's new single...
20%

$15.93 $12.74
Buy Now
See More Deals
We hope you find these deals as awesome as we do! Just an FYI: we may receive a share of sales from links on this page